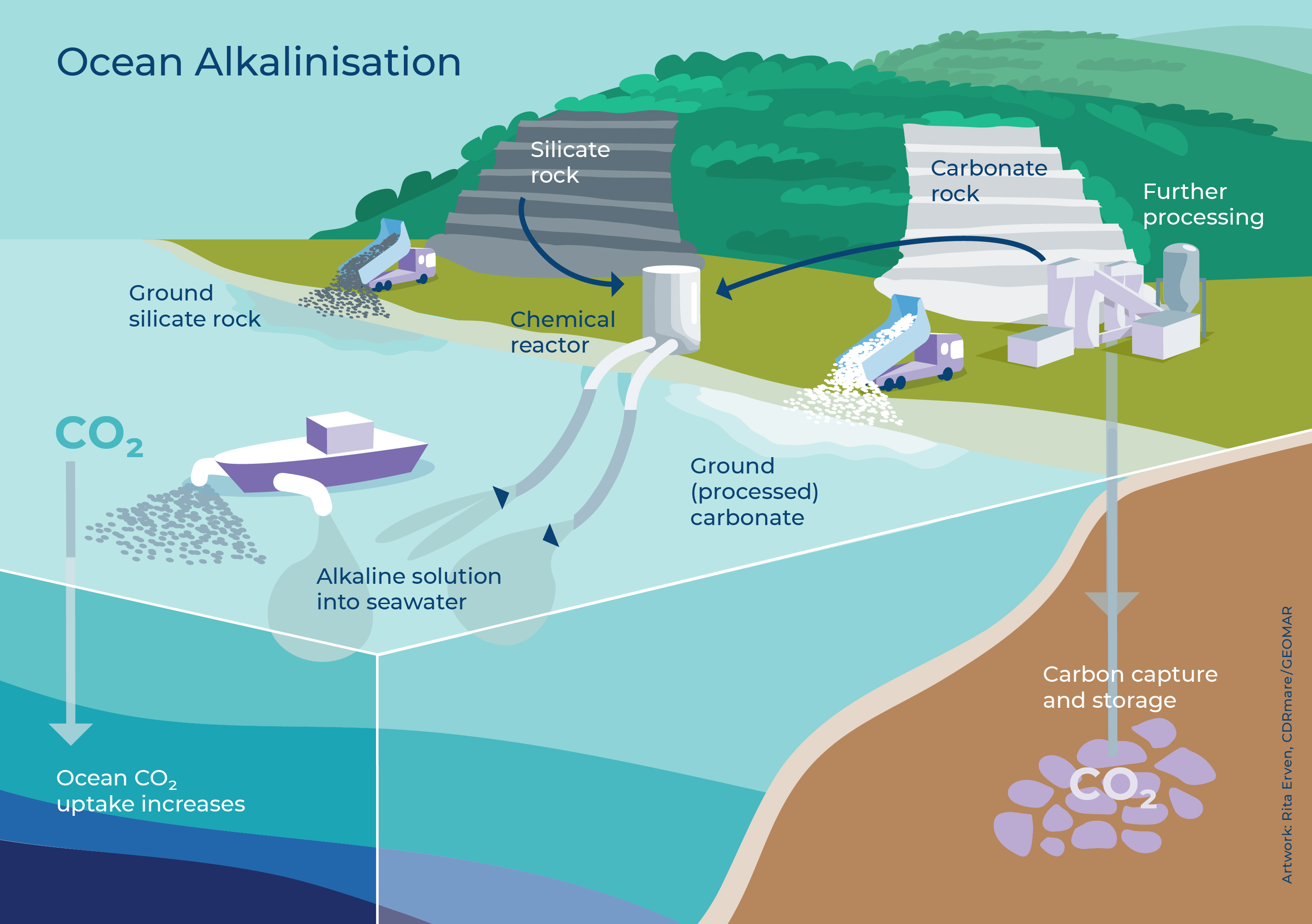 …and what your pasta has to do with it…

Heat waves, wild fires, extreme rainfall, floods, droughts and yet people still claim that climate change is not real. Yes, we are doing stuff, but apparently it is not enough, yet. Drastically reducing greenhouse gas emissions alone will not be sufficient anymore to keep global warming below 2°C, as agreed in the Paris Agreement. Additional CO2 needs to be taken out of the atmosphere to mitigate climate change and to meet the 2°C goal (I am not even talking about the 1.5°C goal anymore…). All over the world, researchers are looking into ways of taking CO2 out of the atmosphere with so called carbon dioxide removal (CDR) techniques.

I am working on such a technique called Ocean Alkalinity Enhancement (OAE). The ocean naturally takes up CO2 from the atmosphere and compensates currently for 26%1 of the anthropogenic (thus human-made) CO2. However, this compensation comes at a cost, which in science is called Ocean Acidification. The more CO2 is taken up in the ocean, the more acidic it gets (making it sour, like coffee or wine). And as sour as you might feel after the 5th glass of wine, the fishes will feel alike, just that they don’t have an aspirin at hand/ fin.

Ocean Alkalinity Enhancement has not only the potential to take up CO2, it can also counteract Ocean Acidification, as alkalinity simply means the capacity to bind acids. And if we ‘enhance’ this process, even more CO2 can be taken up in the ocean from the atmosphere without letting the fishes swim in wine.

So how can we do that? When certain minerals dissolve in seawater, they increase alkalinity and by this bind CO2. Potential minerals are olivine (often used as gemstone) or carbonates (white chalk cliffs of Rügen or Dover) or rocks such as basalt (remember the black beaches of the Canary Islands). These minerals and rocks dissolve quickly and have the potential to bind significant amounts of CO2.
This is also the reason why sometimes this OAE technique is referred to as enhanced weathering, as rock weathering is natural occurring on Earth since billions of years, keeping the Earth habitable.

However, researchers are currently struggling with testing this promising – and in its base natural – technique because of the London Convention. In the London Convention every material put in the ocean, including natural occurring rocks and minerals, is considered as dumping. I mean, this is an important and good regulation! And regarding OAE, I don’t say that we should dump tonnes of alkaline minerals in the ocean and see what happens and what it does to the ecosystem. But I say that we need controlled large-scale field experiments, so that we are able to establish a risk and efficiency assessment. And to do so, we need political support and an adjustment of the London Convention! Only in this way, basic and applied research can identify the most effective ways to mitigate climate change.

It’s kind of funny! About 2 years ago, when writing the proposal for my OAE project, I was really sceptical about it. After I was told that we need to fill a 40 pages application including expert reports from Biologists, Fishery, Military and Ecologists to at least hand-in a request for science experiments, I was convinced we will never be able to test this in the field. At this time, I wasn’t even aware of the London Convention. My motivation mainly came from the idea of testing the basic science behind OAE, so that we at least know the ‘risks and side effects’.

Speaking of which, there are still many unknowns. From the geochemical perspective, the question about side reactions, such as the precipitation of secondary minerals, is still under debate. Imagine your dinner preparations and a bowl of tasty pasta…when cooking your water and you pour salt into it, it initially dissolves. While you are still wondering which kind of sauce you will make, you keep on pouring and at some point, the salt will build a little hill on the bottom of the pot. Now your water is saturated with salt, meaning no more can dissolve. This process, more or less, occurs within the sediments, when alkaline minerals dissolve to the point, that no more can dissolve and secondary minerals build up (remember the salt hill). This process will significantly limit the amount of CO2 that can be bound. However, with respect to OAE, this process was only shown in laboratory experiments so far. One more reason why we need field experiments!

Another aspect of ‘risks and side effects’ is the mineral processing before the marine deployment, ranging from mining -> transport -> grinding -> processing -> shipping to ocean deployment. All of these processes are associated with a CO2 release and need to be considered when calculating the net CO2 uptake from OAE. As bad as it sounds, the impact of these processes could be mitigated if current mining activities would be re-organized or side products of the cement industry would be used (that is already fine-grained carbonate powder). Then there are general questions about OAE, such as how much would it cost? How do we monitor the alkalinity release (= CO2 consumption) in the ocean? How is the social acceptance? Where should we deploy it – open ocean versus coast?

The more I read about the topic, the more I felt like: ‘This is never going to happen!’. But I also realized that we are still at the beginning and that worldwide research institutes and companies invest in knowledge generation and in moving science forward. There is a global effort to assess OAE, its potentials and possible risks! By now, I feel proud and happy to be able to use my basic knowledge on mineral-water interactions and apply it to this research field, which could mean significant advances in mitigating climate change.