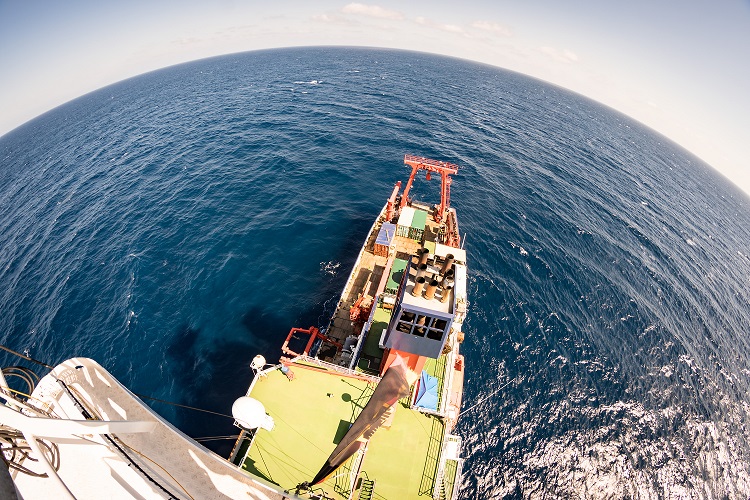 There are many things that make life at sea special; from the people, the science, food, an indefinite supply of chocolate to being nicely rocked to sleep each night (for those who do not suffer from sea sickness). However, on those days where the sun is shining and our 3 bird companions are trailing behind, it is hard to top the sheer beauty of the ocean. I thought I had seen the bluest of the blue during my sea experiences, but nothing prepared me for the beauty of the Atlantic blue. Just like watching a fire burn, you can sit there for hours watching the waves go past deep in your own thoughts. The deepness lures you in, taunting you, creating this desire to jump in to explore the unknown.

As we have travelled closer to the coast the colour has begun to change. From this stunning blue, it has turned into a merky green as the waters start to become more productive. But as the sun begins to set, the waters look just as beautiful as they did when further out to sea. Everyone is captivated by the horizon as the sky lights up with beautiful pinks, purples and oranges. We all stare on in anticipation as the sun slowly sinks below the ocean, awaiting this mysterious green flash we have all heard of. We are still to experience this, but with a week to go, we are hopeful. Everyone is captivated by the horizon as the sky lights up with beautiful pinks, purples and oranges. © Anna Canning

Although we see the most beautiful sunsets out here, sunrises are something my shift and I have never experienced here. We are on the 12-4 shift meaning for one of our shifts we are in darkness. Doing a night shift does have some perks though, one of which happened just the other night when we had our very first night station…

It had been a rough water day, yet the night was clear. The waves had calmed and the ocean had turned from the merky grey of the day to a deep green darkness. Looking up you could see the brightest of stars yet out to sea was the dark abyss. We were lucky enough to be allowed to fish while at the station, being lit up allowing us to view just a few meters out to sea before the darkness reappeared. With one of us donning their fishing-rod and another borrowed, we set out to feed the ship. On the first throw a huge squid was caught; it started squirting ink left right and center, determined not to be taken aboard. Unfortunately it managed to escape after putting up an impressive fight. It left the surface waters covered in a layer of brownish ink, scaring off all the others.

Excluding a naïve small squid (which was released), it wasn’t until a long time after another was caught. We could see pods swimming around below the surface, taunting us as they sparkled in the light. However, by the end of the night 3 larger squid were caught (to the delight of the chef) and a new love for fishing had stirred in everyone.

Life at sea is a beaut! I wouldn’t change this experience for anything.