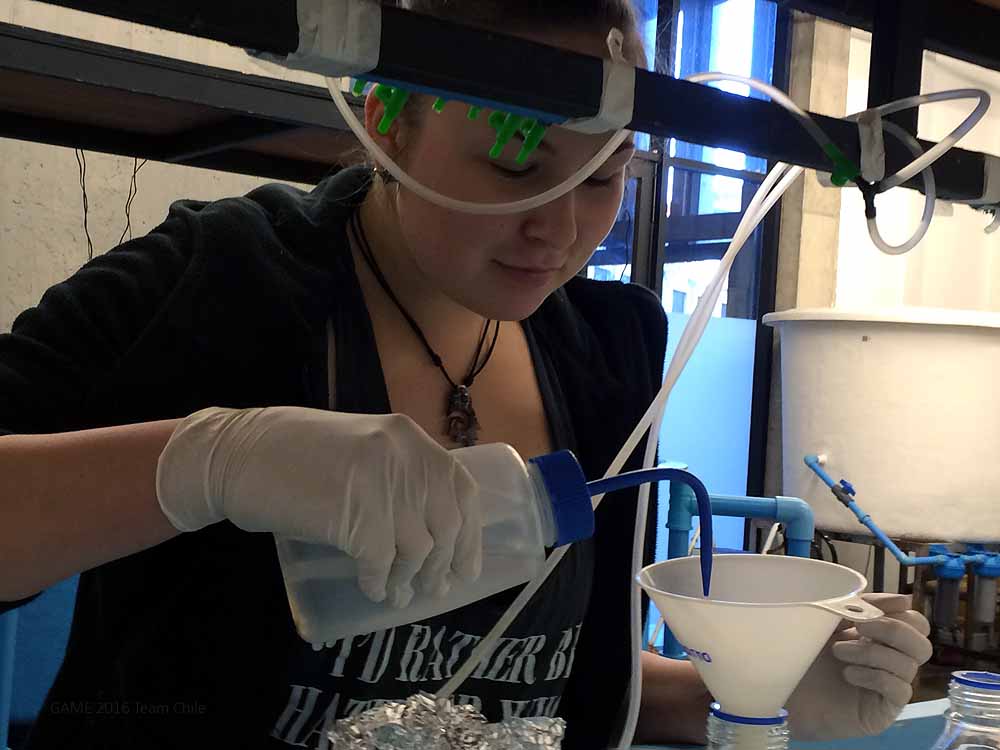 What happened so far:

7.4.16, 12:30, Santiago de Chile, Airport, Team Chile is united again! But where are the suitcases with the most important thing: our microplastic material? Regrettably, we were so sleepy because of the long trip that we got confused about the luggage belts and lost one hour looking for our bags. In the end, we found out that they were already sent to our final destination Valdivia. Relieved as we were, we then thought that we have taken the first obstacle and everything will be good now. How naive we were. The problems haven´t even started yet!

But at first maybe a very short introduction to our experiments: To investigate the effects of microplastics (PVC, < 50 µm) and heat stress on filter feeders, we expose two different mussel species (Mytilus chilensis and Choromytilus chorus) to different microplastic concentrations and elevated temperature levels simultaneously. In the experiment, microplastic concentrations are arranged along a logarithmic gradient to cover a wide array of pollution scenarios. Of these pollution levels at least the lower ones should be equivalent to the microplastic loads that nowadays can be found in coastal sediments. For the two-factorial experiment we are running, we established four microplastic pollution and three temperature levels. Therefore, we have a total of 12 treatment levels with 10 replicates each and all this two times, because we are working on two different mussel species. So in the end, we are handling 240 mussel individuals, what means 240 aquaria which represent the experimental units – plus some more which will be needed for analysing heat shock protein levels. Can you imagine changing the water in all this experimental units every second day? Welcome to our lives! Our record is one and a half hour with two people to get all of them done.

This the theory, now to the practical part!

At this point, we would like to thank the recycling station of the Universidad Austral de Chile, where we collected all our experimental containers and of course thanks to all people in Valdivia who drink Coca Cola from 3L bottles! The amount of these bottles stored there is so big, that we were able to find more than 300 of them. Of course, cutting, washing and marking all these 300 bottles is another story… Thank you to all people in Valdivia who drink coke from 3 L bottles.

Getting the mussels or the eating mussels feast

To get the mussels – or “choritos” as the people in Chile call them – we had to go to different places located near Valdivia. For collecting Mytilus chilensis we went to the Valdivian estuary, located 20 minutes by car away from the city. We did this on a sunny day and after arriving there we found ourselves working between mountains, islands and sea lions. To make the work faster and easier, we asked the diver who works for the marine institute of the university to help us with this. He spent approximately 2 hours in the water looking for the mussels, while we were enjoying the autumn breeze on the boat. In the end, we got about 700 mussels, of which we kept 300 for our experiment and the rest were happily received by the stomachs of our friends in Valdivia. The choice was: experiment or dinner.

To get Choromytilus chorus, we had to drive longer: The coastal city of Mehuín is located 2 hours north of Valdivia, where we collected the mussels in an estuary again. Besides the mountains and beautiful valleys that we got to know on the trip to Mehuín, the best part of the day came in the evening, when we enjoyed three different kinds of mussel meals (Anna:“ I´m still not eating mussels, so Pame had to eat my share too and felt sick afterwards. This was the revenge of the mussels.“).

When you are planning an experiment in biology, probably you would not imagine yourself using a saw to cut wood or making holes in an iron wall with a drill. That, and a lot of more, happened to us when we got into an empty room that we had to turn into a lab, 4 months ago. It was April and we were planning to purchase all the lab stuff by the second week of the month, installing everything in the third week, and start the experiment in the 4th week. Jajajaja, we were so naïve. It actually never happened like this, because the detail we never thought about was that we literally had to equip the lab from the scratch. Nevertheless, when we got to the lab room the first time, we were like two little kids with a new toy. How could it be different, when your work place is located right between the best sunsets of the Pacific Ocean and Valdivia’s jungle in the mountains. Our way to work. There is probably no better place to have lunch on this planet!

But even though we are working in the nicest place you could imagine, the part of equipping the lab was the hardest the time we had here in Chile. We built, for example, wooden racks to hold the bottles in the waterbaths. This took ages and in the end – just because of the perfect idea of using laminated wood (pieces of wood glued together) – all of them were destroyed after one week inside the water. Another period that still gives us nightmares was the time of installing the air pumps. To place them, we had to set up shelves on the wall, which is almost impossible when the wall is full of aluminium beams. Trying to manage this, we burned many drill bits. And finally, how can we ever forget all the hours that we spent working on the construction of our super aquaria, where we had to clean, cut, drill and glue more than 300 plastic bottles and lids to make them suitable for our experiment. To do this, we needed a lot of help from friends and family, people who not only cut the bottles, but also their own hands and arms. So after all of this, we had the feeling that these bottles also cut our relationships to the world outside.

To achieve a nearly complete resuspension of the microplastic particles in the experimental containers (the bottles!), we use airstones to bubble air through them from below. Therefore, we had to connect the airstones to rubber stoppers, since rubber was the only material that we were able to plug in the top of the bottles. For this, we also needed silicon, regulators and four people and one weekend of time, because we had 240 bottles to equip. Hundreds of airstones glued to rubber stoppers with silicone… To establish a bacterial biofilm on the microplastic particles and to let possible additives leach out of the material, we are incubating the PVC powder in seawater for 5 days before we use it for our experiment. For this, we put 50 g of the PVC powder into a glas tank, add 5 L of seawater and resuspend the plastic once a day for 2 hours. After each of these resuspension events, we let the particles deposit and then exchange half of the water volume in the tank. After this has been repeated on five days, we mix the microplastic and the seawater thoroughly with a magnetic stirrer and transfer specific volumes of the suspension, which are equivalent to 2, 20 and 200 mg of microplastic powder per litre, to the experimental containers.

At least this is what should be done in theory! However, while trying the incubation procedure with seawater, freshwater and distilled water, we encountered a lot of problems such as the “magical” increase in plastic dry weight that we found in the samples that we took from our incubation suspension with sea water. This was because we overlooked the little detail that the weight of the salt needs to be subtracted from the weight of the plastic in the end. Incubating the microplastic in seawater. To feed our test animals, who are filter feeders that take their food from the water column, during the experiments, we are culturing the unicellular microalgae Isochrysis galbana. To be able to feed a total of more than 5 litres of algal suspension per day to our mussels, we need a lot of algae. But the best about it is that if you follow the rules that prescribe the amounts of vitamins to be used for the culture medium and indicate the cleaning steps during the process of culturing, it works! You just have to put 5 different compounds and vitamins in each bottle with autoclaved seawater and then the algae grow. But remember: If you start dreaming about microalgae at night, there is probably something going wrong with you! There are still many more stories to be told about all the problems we had to solve. For example the one about the last plug that we had to connect to the electric system in the lab to finally start the experiment. This was the one we were not able to connect because all sockets were occupied and we had to wait one more day to start our so desired experiment- but unfortunately we have to exchange the water now.

At this point we want to thank all the people, who helped and who are still helping us! Muchas gracias! Without you it would be nearly impossible to realize this project!

All the best, Team Chile (the parasites, always looking for new hosts) Of course we can not hold back the best sunset of the Pacific Ocean!