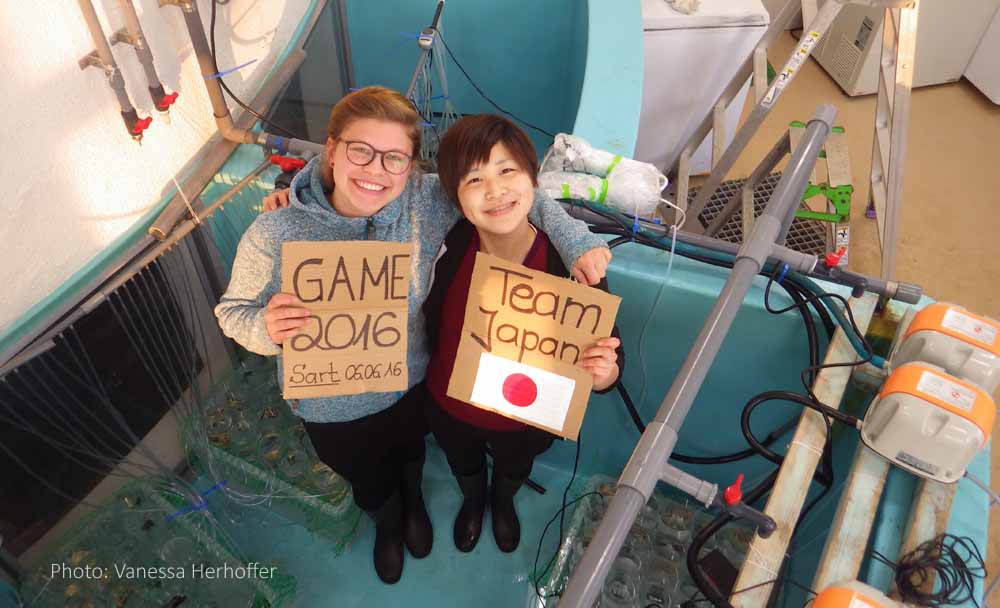 While sitting here in front of the oxymeter, writing this blog and waiting for the next round of measuring the respiration rate of our test organisms, we, Mone and Vanessa – the Japan GAME Team 2016 – become a bit sad. We are realizing that these are already the final measurements and the last steps of our great journey. It feels like we just arrived here, in small Akkeshi town and now it is already time to say goodbye and fly back to good old Germany… Typical working day during our sampling phase, with the most necessary things to survive: COFFEE and music!!!

But let’s start with telling our story from the beginning:

Almost 5 month ago Mone, an undergraduate biology student from Japan, and Vanessa, a master student in Environmental and Resource Economics from Germany, arrived in Akkeshi. Just like it was yesterday, we can still remember how we were driving from the airport in Kushiro to the place that was our home for the next 6 months. Everything looked so completely different, bright and blinking, and we were excited about the time that laid ahead. One and a half hours after we left Kushiro behind us, we arrived in Akkeshi, which is a very small but outstretched city. Finally, we reached the dormitory, which lays isolated behind a small mountain at the ocean, but is located next to the Akkeshi Marine Station, our new place of work. Our home and workplace for 6 month. View on our dormitory from the Akkeshi Marine Station.

During the next days, we started immediately with our work. We furnished our desks, got familiar with the workspace and found a place where we could build our set-up. Of course all the students and scientists, who work at the marine station, were introduced to us by our supervisor Masahiro Nakaoka. With all, we refer to the roughly 20 people who work here and who made us feel like being part of this small family of marine scientists immediately.

After we were familiar with the lab, we had to start thinking about our experiment. This included a lot of nerve-racking brainstormings about how to construct our set-up, which species to take for the experiment, where to catch these animals and, most of all, where to buy all the equipment? This was a problem, because there is almost nothing in Akkeshi than oyster farms, a small home center and two supermarkets. After we developed a rough plan about how everything should look like, we drove to Kushiro for countless times to search for equipment. After a while, we got the feeling that the staff members of the home center there knew us pretty well already.

Also finding and collecting individuals of our two bivalve species, Mytilus trossulus and Crassostrea gigas, turned out to be more tricky than expected. Even though oysters are very abundant in Akkeshi, they are also very hard to pick. They do not live attached to rocks like the blue mussels and also occur in deeper waters what makes it very difficult to find them. Therefore, we decided to buy them from a nearby oyster farm. In case of the blue mussels, we tried to collect them in the field for several times. Although, we could find many, most of them were too small in size. Due to a strict time schedule for when to start with our pilot and main study, we finally decided to obtain them from the same farm where we got the oysters from. Mone trying to get back to the boat safely. One of our tests organisms: Mytilus trossulus. And the other one: Crassostrea gigas.

After we had all the equipment we needed, we started building our set-up. For this, we spent hours and hours cleaning and cutting plastic bottles, making holes in rubber stoppers, building a stable frame and putting everything together. We did this again and again for many days and there were many situations in which we had to modify our constructions. Either they were not robust enough or some connections did not match or the air bubbling for our aquaria was not consistent or did not work at all…. A lot of ups and downs came along during the process of our preparations, but finally, we had a first, fully working set-up for our pilot study! What a happy day for us!!! Mone happily cutting the bottles for our set-up…Ohhh what a fun work!!! 240 of these rubber stoppers had to be punched Mone working on our first set-up for the pilot study. And that´s how it looked like after all elements were finally connected.

The pilot study itself was run for two weeks. During that time, we tested the different treatment levels, which represented different combinations of plastic concentration and heat stress, and checked if our set-up was robust enough to last for 12 weeks – which was the planned duration of the main experiment. Already during that time, we recognized that the main study may become even harder work than we initially expected. The pilot study included just 80 animals, 40 of each species, but in the main study we should handle 240??? No way!!!

BUT, finally we reached that point and were able to start our main study! We were so proud that we could start just in time, that everything worked out so far and that we made all that on our own!

Apparently the work was very exhausting and we still don´t like our “water/plastic exchange days” when we have to clean up every single bottle by hand. This took us almost half a day in the beginning and brought a lot of back pain with it, but we got used to it and after a while we became better and better. Listening and sometimes even singing to music during the work makes us feel not that bad anymore. We learned so much during our work here. We not only felt like becoming real junior marine scientist, we also learned to deal with things that were not planned or first seemed impossible to be handled. Apparently, there were a lot of moments when things did not work out the way they should, for example when one of our two oxymeters got broken !!!again!!! during our sampling phase. But after a while we stopped complaining and found solutions for every problem we had. Meanwhile everything became a routine and we really feel more and more confident about our project.

Besides our project there are so much more things to write about:

Certainly, we did not work all the time. Well ok….almost… but the social and fun part did not come off badly.

You learn a lot about the culture here in Japan and about what is very typical and what is not. A good example is the shaking hands when you meet people for the first time. Instead of this, the Japanese take a bow, which was very strange for Vanessa in the beginning. She first shook hands with everyone, because in Germany she was so used to doing that, but people looked a bit confused about it.

Another very typical thing in Japan is that you never wear shoes inside of a house. So even when we went for work in the lab, we changed our shoes for slippers. This makes you feel much more comfortable than with normal street shoes on by the way….And beside of our rubber boots, the slippers became our best friends at work!

Japan has plenty to offer. Especially Hokkaido, the north island where we stay for the project, is simply beautiful. Far away from all the trouble and tourism that you meet when you come to big cities like Tokyo or Kyoto, Hokkaido is a big island full of nature. Here you can find many wild animals like brown bears, foxes and lots and lots of deer – that sometimes even stand in the middle of the streets in Akkeshi. But you also have the ocean, forests, mountains, lakes and wetland areas around. Particularly if you love hiking, the trips to the mountains, of which some are still active volcanos, are the best hikes in Hokkaido. With a following visit in the very relaxing so called ´Onsens`, which are hot springs that are very popular in Japan, you can make a day perfect! Deer everywhere, even in the streets of Akkeshi. Beautiful view from one of our hiking trails to mount Meakan. Great view on a mountain peak. One very special event that you should not miss in Japan is the cherry blossom season, which, in the north of the country, starts in early May. So for roughly one week all cherry trees are in bloom and everything turns green in Hokkaido. Needless to say that the Japanese celebrate the cherry blossom time with loads of festivals and so we did in Akkeshi! Having a short ice cream stop at a cherry blossom park on our way to Kushiro. Gradually, we became more and more familiar with all our colleagues, who are friends by now. We enjoyed a lot of things together, like, for instance, our weekly group dinners. Either we enjoyed a relaxing evening with beer and barbecue or we prepared typical Japanese dishes in our dormitory, which of course includes eating a lot of sushi and drinking sake and plum wine! We will miss the countless barbecues we had together – and of course all the other funny dinners, too!

Conclusively, we just can say, we love our project and everything that came along with it and we would not want to miss one thing. And, sorry Team Chile, but we have the best sunset of the Pacific Ocean ;-P.