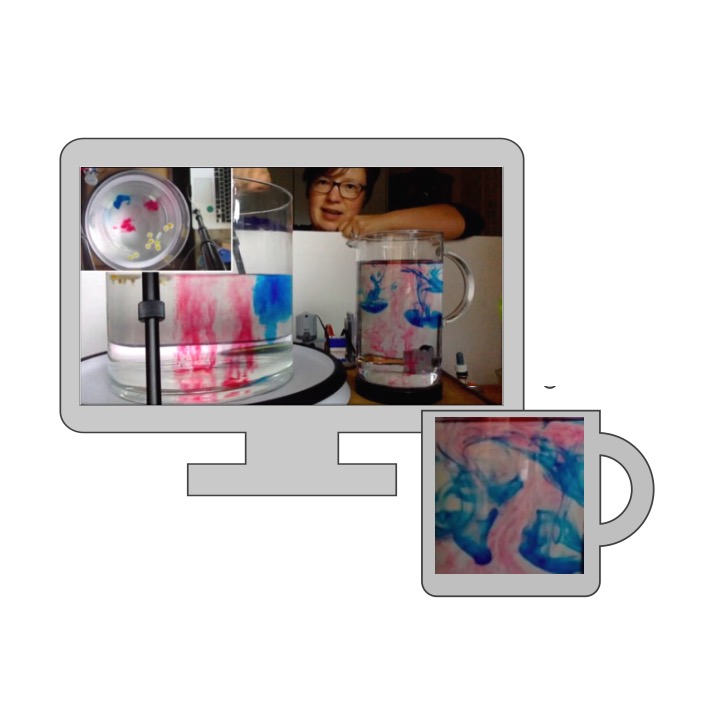 This is the longer version of the (A4!) poster that I presented on behalf of myself, Kjersti Daae, Elin Darelius, Joke Lübbecke and Torge Martin at the #FieldWorkFix conference last Tuesday (September 8, 2020). If you would rather listen to the voiceover than read the transcript below, please feel free to do that! (Thanks to Torge, the voice over is about 1/3rd the length of the blogpost that I originally wrote to use as script :-D)

Welcome to our virtual poster!

I want to tell you about #KitchenOceanography: experiments that students can do at home, using common household items. Whether due to Covid-19, or institutional constraints like the lack of laboratory spaces or instructors, or simply because a hands-on experience would be useful with a certain concept, but it’s not on the syllabus – #KitchenOceanography is a great substitute for doing experiments in a laboratory course when that isn’t possible.

We use #KitchenOceanography when teaching physical oceanography and climate sciences. But the concept of home experiments can easily be transferred to other fields, and I therefore want to present the learning outcomes we can achieve on a fairly abstract level. If you would like to learn about #KitchenOceanography experiments in detail rather than just the general concept which I am presenting here, please follow the link on our poster to a blog post in which I have linked to tons of examples of different learning outcomes and experiments (and to all the experiments mentioned here, as well as 24 easy starter experiments).

One typical learning outcome in laboratory courses is the deepening of understanding of concepts that are theoretically dealt with in a lecture. If the concept itself cannot easily, affordably or safely be transformed into a home experiment, you could ask students to come up with a demonstration of an analogy with the concept instead. We have done that when teaching about processes that govern the El-Niño-Southern-Oscillationpattern in the Pacific Ocean. Of course, students cannot build a physical model that represents all the processes in the ocean and atmosphere that are relevant, but they can come up with demonstrations that show analogies of the cycle.

Another learning outcome in a laboratory might be developing intuition on the one hand, but also checking intuition against observations and explaining counterintuitive results. A great experiment here is to ask students to place ice cubes in two beakers with room-temperature water, one salt water and one freshwater. Asking students to predict which of the ice cubes will melt faster leads to 90% wrong predictions, and because it is really difficult to come to terms with a wrong intuition, it will lead to a lot of learning around experimental skills. Students will ask themselves if they maybe accidentally swapped the beakers because they didn’t take notes of which one was which. They might try to taste the water to test which of the beakers contains salt water (tasting in a lab of course being a big no-no). Even if the course is on a subject that is not related to ocean physics at all, this experiment still holds a huge potential to practice – and gaining appreciation for – laboratory skills.

A third common learning outcome in laboratory courses is for students to exercise curiosity and practice creativity. Using an experiment like the melting ice cubes one I just described ALWAYS works to do just that. Students will always come up with questions that they want to investigate. What would happen if the ice cubes weren’t floating in the water, but were forced down to the bottom of the beaker? Or if the ice cubes weren’t frozen fresh water, but had been made from salt water? In my experience, even students from other subjects that rolled their eyes when I told them they were going to do an experiment with water and ice in plastic cups get hooked and want to understand why their intuition was wrong and what more there is to explore.

Another learning outcome often connected to laboratory courses is to develop reporting skills. With the ice cube experiment I already showed the importance of taking notes even when experimenting only in your kitchen, and #KitchenOceanography lends itself to practicing writing lab reports: now many of the materials and conditions need to be described in a lot more detail because the cooking salt that I use in my kitchen might not have the same composition as the one that you are using, which might be kosher, or enriched in iodine, or reduced in sodium. So if we want to be able to compare results later on, all these things need to be written down. And of course, reporting skills might take a different form than a conventional lab report, especially when students are socially isolated, using for example social media or blogs as an outlet might provide them with community, feedback and recognition.

Lastly, a common learning outcome is to recognize problems and errors during experimentation. Since #KitchenOceanography is less supervised than a typical laboratory class, students will inevitably trouble-shoot more independently, and it’s a good idea to explicitly include reflection on what went wrong and how it was fixed in both documentation and discussion of the experiments.

So what would it look like to use #KitchenOceanography as #FieldWorkFix?

We have run #KitchenOceanography experiments in different instructional settings. Back in the day when we were still teaching in-person classes, in addition to using them as hands-on experiments within class, we gave them as homework. One task was to find a way to measure the salinity of a water sample the students were given, and came up with many surprising and creative solutions. In this setting, #KitchenOceanography was already done asynchronous: students did the experimental work whenever it suited them and report back. It can be done in exactly the same way, and reporting back can happen either in writing or in the class’ video call.

What we have had a lot of success with last semester, though, was a synchronous setup. In a video call, students did simplified versions of an experiment, and the instructor showed the full version of the experiment that students would have run in class, had that been possible. In our case, the experiments would ideally have been conducted on a rotating table to simulate Earth’s rotation. And while I have one in my home, not many students do. So we asked students to do the non-rotating version at home, while I presented the rotating version. The added benefit was that we took time to compare and contrast the two different versions and were thus able to isolate the effects of Earth’s rotation – something we would not have spent time on had students had the opportunity to work hands-on with the rotating tables themselves.

We had three modes of presenting the “full” version of the experiment: using pre-recorded videos (which is definitely the more error-proof way to do it!), running the experiments as a demonstration in real time, or asking students to “remotely control” me doing the experiment by telling me what parameters to modify to which values. This worked by me joining the video call with two devices: One that was recording myself and my experimental setup, looking into the tank from the side, and one that was mounted above the experimental setup and showed the top view (which was relevant for the experiment we were doing). Students shared their experiments via video stream when they chose to. The class was taught by a second instructor, which is what we would definitely recommend: Having one person host the meeting and deal with questions and difficulties as they arise, and have a second person focus on doing the experiment.

All in all, despite the unavoidable tech problems, doing these video conferences where we all did experiments together, were a lot of fun for all involved, and definitely helped make the somewhat sad and lonely experience of learning alone at home, instead of hands-on with a nice group of people, less lonely and a lot more fun.

Thank you for your attention.