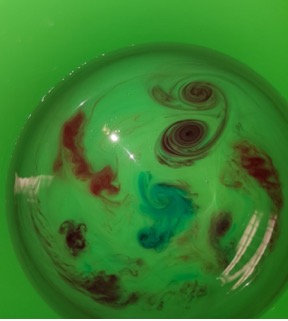 We are a group of undergraduate students studying Physics of the Earth System. We love science. We love that at Geomar we can study super exciting aspects of the Earth System in very small groups. And we love formulas and mathematics, well to a certain extend at least  🙂 This is where the buckets come into play…

This winter term, we continue with the “Atmosphere and Ocean Dynamics” lecture at Geomar. In the course, we study ways to describe atmosphere and ocean phenomena utilizing mathematics. It is good to see that all the hard work invested into the courses in mathematics and theoretical physics eventually pays off. At the same time, however, we sometimes find ourselves scratching our heads when the Blackboard is covered in formulas. It can be very rewarding to power through a derivation of a formula and prove it to match with observations in the field. But what can be more rewarding than to witness the phenomena first hand?

Now, in this winter term, Mirjam and Torge thought of a great way that allowed us to apply the lessons learned from theory in practice: tank experiments! They spared no effort and prepared an encompassing set of experiments, from convection in stillstanding to rotating tanks simulating Ekman spirals and planetary waves. Lego motors were converted to power a uniform rotation of the round and squared tanks. And to be frank, who does not want to find an excuse to tinker around with Lego?

The basic recipe for Day 1 was simple: Take a bucket. Put it on a spinning disk powered by a Lego motor. Wait until the frictional forces of the bucket’s walls have accelerated the water column to rotate at the same speed. Use a few drops of food colorants and be stunned by the results:

On Day 2 it was all about convective processes in the water column. In both, a non-rotating and a rotating tank, cooling was simulating by using a cold pack or a round glass with frozen water respectively. Areas, where cooling was applied, were marked with blue, the remaining areas with red food color. The results without rotation showed very interesting parallels to water mass formation processes in the open ocean. A layer stratification and overturning circulation patterns were clearly visible. Heavy and cold bottom water was overlaid by intermediate water of medium density, which was formed by turbulent mixing in the cooled area. At the top a warm water sphere layer formed.

After initial experiments in the green buckets, Torge further optimized the lab’s setup. He procured special glass tanks with vertical walls. These allow to observe the phenomena much better including side views, as can also be seen here.

In a square tank, rotating with constant velocity, we observed so called topographic waves by embedding an inclined plexiglas plane. Such topographic waves occur when the ocean exhibits a sloping bottom or at inclined frontal zones between different water masses. Whenever a water parcel tries to move either into a deeper or a more swallow region, the conservation of angular momentum pushes it back by causing a small rotation. In sum, this leads to a drift perpendicular to the slope.

To make such movements visible, we simply put a blue dyed ice cube into the water and watched the molten dye’s path. As you can see in the picture the wave, more specifically the perturbation, spreads westward. Also, the slalom course where the water is forced back is clearly visible.

For the second experiment we changed our square tank to a cylindrical one and, again, set it in rotation for quite some time. We then inserted little crystals, which continuously emit purple color, into the water to make currents visible. As long as the whole tank rotates evenly, the water column inside is following it at the same speed. We call that “solid body rotation”, since water and tank act as one unit. Removing our nifty Lego drive and even abruptly stopping our spinning setup, changes the state dramatically: While the tank stops immediately, the water doesn’t quite get this information yet and keeps rotating. Everyone knows this phenomenon of inertia when one sits in a car that suddenly slows down. The vehicle itself slows down, whereas our bodies still travel further forward, just to be, luckily, held back by the seat belt. The latter in our case is the frictional force between the water and tank. Especially the friction at the border between its bottom and the water column shows a fundamental phenomenon of ocean physics: the Ekman spiral.

The bottom water layer is exposed to the largest frictional forces of the tank’s glas surface, opposing its rotational momentum. At the same time, the bottom layer itself affects the layer above and also slows it down, just a bit less. This layer then, again, slightly slows down the next level, and so on. The rotational velocity is therefore decreasing from top to bottom. Under these circumstances, the water forms purple spirals in the middle of the tank. The additional ascending motion is caused by convection from the sudden lack of centrifugal force

In the real ocean, the setup is however inverted. Here the friction occurs at the water surface (wind stress), so that the velocity decay will be from top to bottom.

The last experiment’s objective was to show convection of warm and cold water masses. Therefore, an experiment from Day 2 was repeated, but now with a much smaller rotational speed to cause less coriolis force induced turbulence. The effects were quite remarkable and very interesting to look at. The blue colored (cooled) water and the red colored (warmer) water form meandering fronts and show instabilities, just like the polar front, where similarly warm and cold air masses meet.

It is fair to say that we learned a lot by supplementing the theory with these experiments. Not only is it a lot of fun, the exercises do further give us a good thought-provoking impulse.  They let us discuss what we have learned from the books more lively. We want to thank Mirjam and Torge for the cool experience. Also, Baloo the dog wants to thank everyone. Whilst being asleep most of the time, he now claims to be amongst the most well-educated of his kind. 🙂