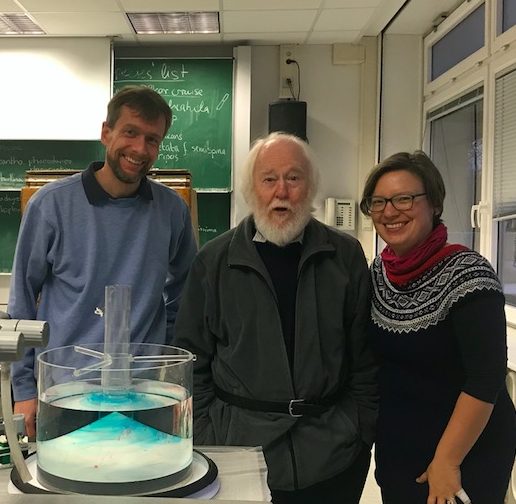 Yesterday Torge and I spent a fun Friday night trying out new rotating tank experiments together with Rolf Käse. Rolf taught the lab course that got me into tank experiments (back in 2004!) and he’s still such a huge inspiration!

Rolf brought his tank which features a conical bottom, and this gives so many more options! Which we might or might not include in class at some point 😉

Or, if we cool right in the center of the tank and then drip dye in, we can see how it spreads over time. Here we see that in the middle, where we’ve just injected some dye, it’s still sinking down in a turbulent 3D fashion. But dye that has been in the tank a little longer has spread along the bottom of the tank in a spiral pattern.

Depending on how quickly we turn the tank, that is! Below we are turning faster than above, so here the heat exchanges happens via eddies, not overturning.

And here is a picture of us. Thanks for a fun tank experiment session, we will have to repeat this very soon! 🙂