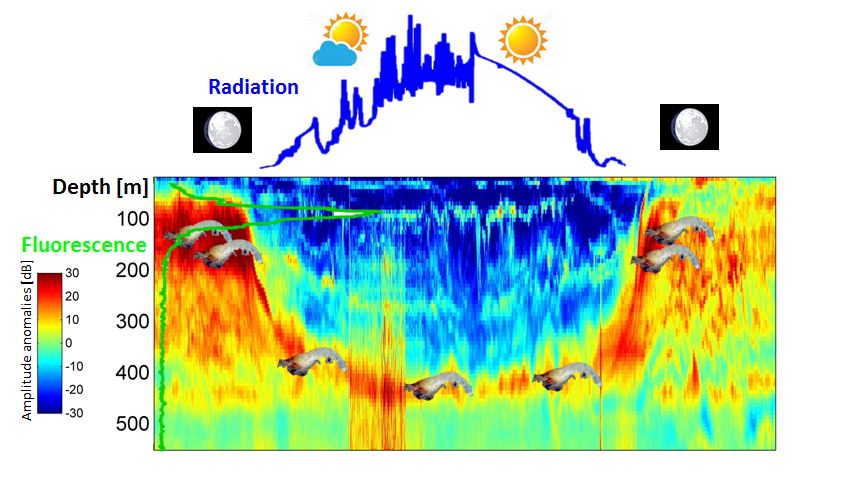 Where neither light nor electromagnetic waves can reach, sound waves do. Sound waves can travel way deeper in the ocean than light or electromagnetic waves. With a little of science and imagination, with sounds waves we are able to study the sea floor, currents, and much more, like plankton movements. The ADCP, Acoustic Doppler Current Profiler, is one of the instruments that make this happen by emitting sound waves and measuring the time until they are back after being scattered in particles, like zooplankton for example.

Zooplankton, like krill, feeds mainly of phytoplankton, the small ones who do photosynthesis and need to be in the upper layers in order to get light. Through the changes in the back-scattered sound from the ADCP we are able to study the daily vertical migration of the zooplankton, that’s what the colored figure shows. Where there is red, there are high scattered sound waves, so probably high zooplankton density. We can see the zooplankton aggregated near 100 m at night and then going down to 400 m at day.

Zooplankton do this migration in order to hide from the visual predators (mainly fish) in the darkness of deep waters during the day and graze at night near the surface at depth’s just exactly where we measured maximum of fluorescence in the CTD (a rough approximation of phytoplankton concentration). A basic behavior of eating and not be eaten. I like it when we get to simple conclusions! It also looks like other smaller zooplankton species migrate less deeply, it would make sense if they have a swimming/hiding optimum per size. We are now trying to corroborate this with the multinet samples of the forams team (check out Maxi’s multinet sampling post).

Shaded colors show the amplitude anomaly [dB] of the backscattered ADCP from one-minute measurements during 18 of December. In blue it is shown the every-minute measured radiation during that day, and in green the fluorescence from the CTD profile of that day.
© Gastòn Manta

With Dani and Gabi, and help from Patricia and Martin, we are trying to integrate different instrument measurements to study these daily vertical migrations. Next step: Study this migration variability across the South Atlantic crossing, Agulhas eddies seemed very different!

PS: We’ve got ARGOs for Christmas One thought on “Let’s take a sound look into the plankton!”