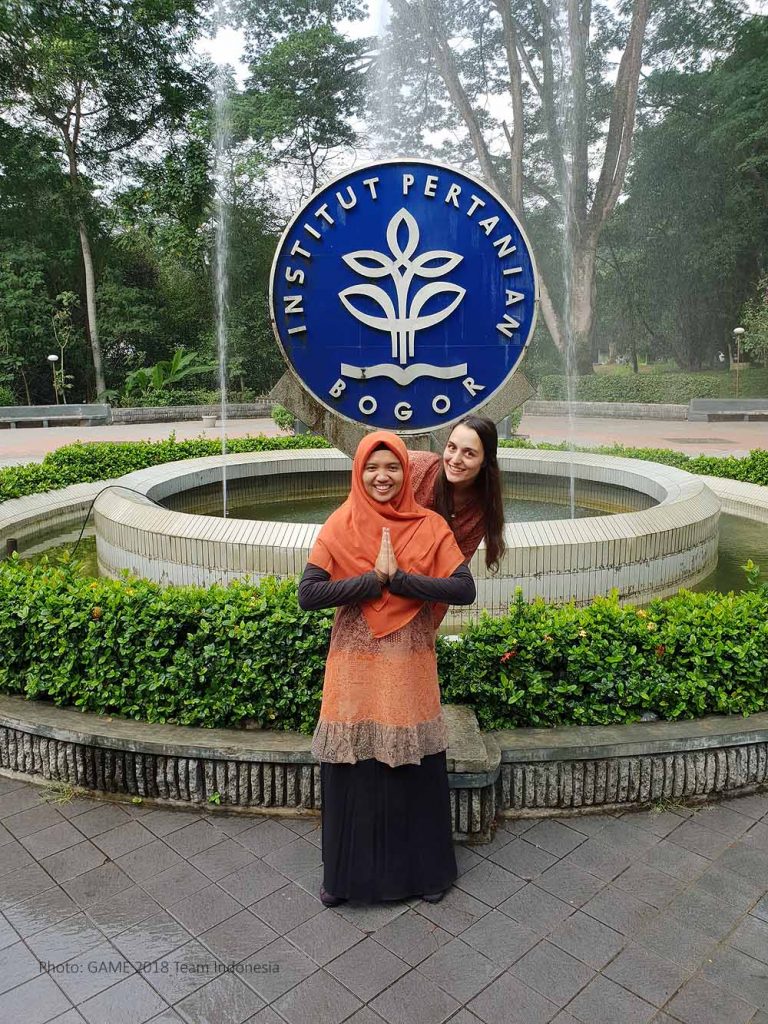 As our time in Indonesia has ended and we are back in Kiel, it’s time to tell you about our experiences: Actually, there are normally about 11 000 km between Ica, an Indonesian student in Bogor and Vroni, who is studying in Bayreuth, Germany. In March, we first met in Kiel at GEOMAR where this year’s Team Indonesia was formed, and we should stay together for the next 9 months. On first sight, the members of Team Indonesia looked so different, but with time we perfectly matched.

After intensively planning and discussing our study with the other teams in Kiel, we had to transfer the plans we made into reality. Our experiments took place in the Marine Habitat Lab of the Agricultural University in Bogor (IPB), a “small” city (which actually is the home for over 5 million people) in the south of the capital Jakarta on Indonesia’s main island Java. There is another name for Bogor in the Indonesian main language, which is “Kota Hujan”, the rainy city. During the first weeks of our stay, Bogor proved that the name is appropriate with extreme rainfalls every afternoon. This is why we sometimes had to stay in the lab until dawn for seeking shelter. Compared to other regions, Bogor’s climate is kind of cool, but still way too hot for foreigners from temperate regions. Especially in the dry season from May to September temperatures in the lab easily exceeded 30 degrees. Without air condition, working there was challenging, which is why we often gathered in front of our little fan.

Next to the totally different climate, the daily life in an Asian city was something that western people like Vroni first had to get adapted to. In summary, it’s chaotic! You have to learn how and where to buy all the things you might need for your daily life, especially food and how to get around in the city quickly, otherwise you are lost. For that purpose, the most important tool you have to have is a smartphone. Honestly, it’s kind of obligatory there! As the only public transportation system, the people of Bogor used to have a huge number of small blue buses called “Ankots”. They were stopping everywhere you want them to stop, but first you need to know where which bus is going. This is difficult without having any hint for it. Another disadvantage of that kind of transport is that you get easily stuck in the permanent traffic jam for hours. Since the beginning of this year, however, a new transportation system reached Bogor, which is responsible for big crowds of people in front of every building who are all starring on their smartphones. This mysterious phenomenon is due to an application like “Uber”, called Grab or Go-Jek with which you can easily hire a motorbike or car driver to pick you up from every place and drop you off at any place you wish for. A completely new experience for Vroni, but also kind of fun! Ica is cooling herself during exhausting lab-construction-work. Vroni sitting on a motorbike taxi (in the front) and an Ankot (small blue bus) in the back.

Before we could start preparing our experiments we had to face more challenges. Besides cleaning the laboratory, we improved our mechanical-technical skills by installing a seawater-filter-system. It might sound ridiculous but as we are working with marine organisms and since, unlike the other sites, Bogor is located far away from the ocean, it was necessary to order seawater from Jakarta. Thus, a seawater filter to maintain a good water quality in the lab in Bogor was the most important prerequisite for our experiments. Unfortunately, that turned out to be a never-ending-story, which is why we are experts in handling water pumps now. We loved cleaning simultaneously (No, it’s not only for the picture!). For realizing the experimental approach we established in Kiel, which was tailored to study the effect of ocean warming on food preference in marine gastropods, it was, first of all, necessary to find a suitable test organism. Different from our expectation with Indonesia being a biodiversity hotspot, this turned out to be very difficult. We did our first sampling at “Pulau Seribu” – Thousand Islands- in the north of Jakarta. There, we collected intertidal snail species from mangroves as well as subtidal snails from the coral reefs around the islands. However, as the abundances of the different species were low and since most of the intertidal species were too small to observe consumption, none of the sampled species was promising for our experimental approach. In the end, we decided to use abalones, more precisely Haliotis squamata, as our study organism, because they were readily consuming macroalgae and algae pellets in proper amounts. For the experiments, we decided to use juveniles in order to reduce the size of the experimental containers needed as we were limited in space. We received all our animals from hatcheries in Bali and Lombok. Snorkeling for collecting species in Pari Island, although it looks like Ica wants to catch fish for dinner. Sorting the collected snails and the algae species. At this point, we finally had animals and seawater in our lab, so we could start our first pilot study. The aim of this was to identify the relationship between consumption rates in the snails and water temperature. For that, we first had to decide about our temperature range. As we were working in a tropical system, the ambient temperature is already high with 27 °C sea surface temperature (SST). The fact that we already knew that temperatures around 33°C are lethal for our test species, led us to choosing a narrow temperature range (27°-33°C) with 5 temperature levels at a 1.5 °C resolution. In this first pilot study, we used only food pellets made out of Ulva-powder to assess consumption in the snails. After a short time, it turned out that at 33°C mortality was already almost 100 %, but we could clearly see that even the lowest temperature we applied was beyond the point of maximum consumption in Haliotis squamata and that consequently in the tropical system of Indonesia the animals are in the declining part of their temperature-performance curve for consumption. These results helped us to modify the temperature levels for the main study.

After the first pilot, which was running smoother than expected, we were optimistic that the main study will also run well. Unfortunately, that turned out not to be true. Problems not only occurred but were increasing in size. First, we realized that keeping macroalgae in the lab was not as easy as expected. We collected them again in the Thousand Islands and that went along with a transportation time of at least 6 hours from the islands to the lab –  depending on the “macet” (traffic in Bahasa Indonesia). Due to these long transportation times, only 3 macroalgae species survived long enough under lab conditions to be used in the main experiment. This was the first reason why we had to reduce our experimental design for the main study. The second reason was a couple of strong earthquakes in Lombok in the beginning of August. We could plan everything well in advance but when nature is against it, there is nothing we could do but except it! The facilities of the abalone hatchery were destroyed, which is why they were unable to deliver more animals to us. Nature and its power are extremely present in Indonesia and the people have to withstand tragedies like that often. Being right there develops a strong emotional connection to the people and made our problems appear so tiny in comparison… Haliotis squamata in the experimental container feeding on Gracillaria sp. Ulva pellets before and after the attack of starved abalones. Sargassum in the lagoon of Tidung Island.

For that reason, our design was reduced to two scenarios: The one in which acclimated algae were fed to non-acclimated grazers and the inverse one. Besides these limitations, our main experiment was similar to those of the other teams. After installing the experimental set-up, we acclimatized the animals to the lab for 18 days. During that time, our daily work consisted of removing the faeces from the experimental containers, exchanging the water in the containers, checking the water quality and feeding the animals. The feeding assays that followed acclimation lasted for 24 hours. To assess consumption by the abalones, we measured the weight of the algae fragments before and after the feeding assay. Moreover, we investigated the behaviour of the abalones by documenting their position in the feeding arena every 30 min. Luckily, we had some friends helping us with this part, but still we left the lab after 36 hours! Weighing the Ulva pellets after the feeding assay.

Now, after all data have been collected, we can only hope that they are nice. Recovering during the weekends is difficult in Bogor, because it takes so long to leave the city. So, during that time we could only enjoy Indonesian food culture a lot! Fortunately, we both have the exact same taste, which is not spicy but sweet. However, Indonesian food is extremely spicy as it consists basically of chillies and rice. They have plenty of different kinds of Sambal – chillies mixed with something else – and traditionally Sundanese food is eaten with the hand and Bogor is located in the Sundanese region. But if you eat chillies using your hands you have to watch out extremely where you put them afterwards, otherwise your eyes will burn like hell! Maybe some vegetarian recommendations here: Gado-Gado is absolutely delicious, Vroni had it almost every day in canteen. It is made out of mixed vegetables, “tahu” and “tempeh” (Indonesian tofu) and mostly lontong, which is an Indonesian rice cake. Everything is mixed together with a peanut-sauce and served with rice-chips (usually called “kerupuk”). It can be extremely spicy depends on how you order it, so keep it in mind!

Near Bogor, there are plenty of waterfalls with plenty of Indonesians wanting to take a selfie with western people. It’s so funny to see how they all refresh themselves in the cold water but remain completely dressed in jeans, shirts and jackets. Besides this, if you drive up a mountain outside the city, you can visit nice tea plantations and have a walk in some fresh air almost everywhere! For marine biologists though, the most fascinating thing is Indonesians underwater-world! Tropical coral reefs with cute sea turtles waving hello in combination with fresh coconuts (Kelapa muda) is like heaven. Refreshing after sampling in the sun: Es kelapa muda. Tea plantation around Bogor: Jalan-jalan on the weekend. Rice fields near Bogor. A woman singing to cast away birds. Teamwork on the funny side.

After all, we learned a lot about scientific work, cultural exchange and ourselves. And we will the latest meet again on our weddings, that’s for sure!