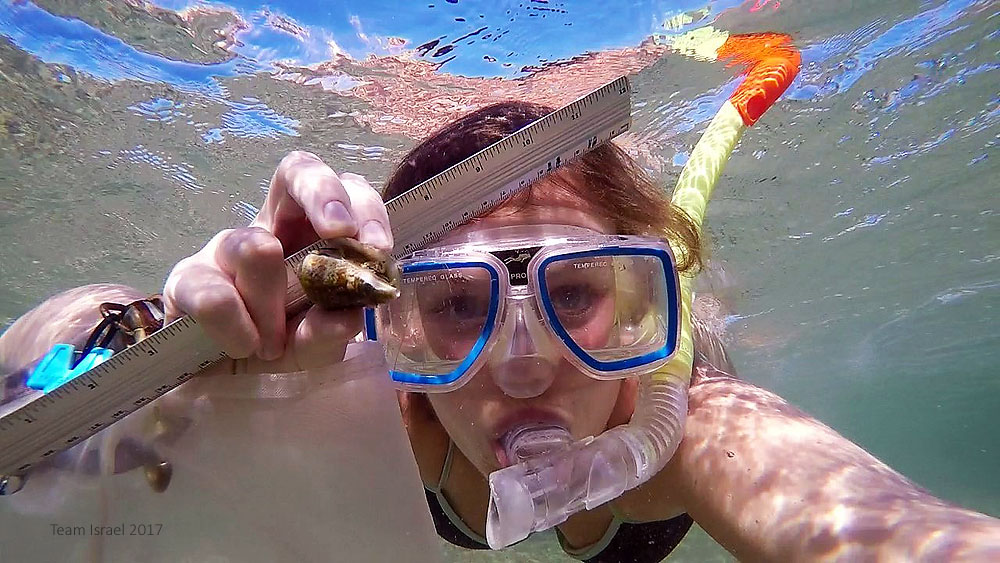 Shalom, we are Luisa and Erez – Team Israel 2017! Luisa is a master student from Goethe-University Frankfurt am Main and Erez is a PhD Student from Haifa University. Our working place for the six months in Israel was the Marine Community Ecology Lab which is part of the “Israel Oceanographic and Limnological Research”. The IOLR is based in an interesting building from the sixties of the last century that is situated directly at the beautiful Shikmona Beach in Haifa. With all its puzzling stairways and hidden places it might seem a little bit confusing and chaotic in the beginning, but it offers great facilities for climate change research and houses amazing people to work with! Collecting potential grazer species for our experiments in the lagoon near the institute. The lagoon is formed by abrasion platforms – a unique biogenic rock formation in the Mediterranean. The Rilov Lab group on a fun trip in April.

Same as the other GAME teams all around the world, we investigated the effects of ocean warming on marine grazers by measuring their consumption rates, faeces production, respiration and activity in different thermal environments. This allows us to generate performance curves for each species. The global focus of our research is on “grazing in a warmer world” and each team used delicious ulva pellets for running feeding trials that allows to assess grazer consumption rates. Here in the IORL, we have a small algae farm where we grow and harvest local Ulva spp. to dry and grind it. The resulting fine algae powder was the main ingredient of our food pellets. Ulva pellets after a feeding trial – our fish seem to like the them.

Israel is a very good place to be a marine biologist, because of the access to both the subtropical Mediterranean and the tropical Red Sea. Many interesting phenomena occur here at the moment, such as the tropicalization of the local communities in the Eastern Mediterranean by the enormous number of invaders that enter the system from the Red Sea via the Suez Canal. In addition, the Eastern Mediterranean is extremely affected by global climate change – the average  sea surface temperature increased by more than 3°C in the last 30 years.

Since Erez’s PhD project is about the impacts of climate change on herbivorous fish, we already knew one of the two species we wanted to work with right from the start. It was quite adventurous to collect a share of the needed Siganus rivulatus specimens by night snorkelling just next to the institute. These medium sized, schooling fish are common in shallow rocky reefs and during the night they rest on the seafloor in large numbers. To catch them, it requires three things – flash lights, nets and good gloves since the fish have a row of painful spikes on their back. In the ideal case, the light confuses the fish so much that it tries to hide itself by pressing flat to the ground without moving. If this happens you must be quick in covering it with the net and transfer it to the collection cage without letting it escape. In most nights we caught around 50-60 specimens in a 2-hours-snorkelling session.

Our fish grazing experiment took place in the mesocosm facilities, which are in the outside area of the institute. It is a computer controlled system consisting of 16 large water tanks which are equipped with heaters and chillers that can precisely hold a targeted temperature. Siganus rivulatus can change between three different skin patterns – overall marbled like in this photo, silver with a black middle line or silver with narrow yellow lines. A normal morning for Erez in the mesocosm facilities.

Also, our second grazer species was quickly identified – after some feeding pilots with different snail species such as Columbella rustica and Cerithium sp. we decided to work with the gastropod Conomurex persicus. This is a quite large marine snail that is one of the most prominent animals of the rocky shores near Haifa and as soon as you can tell the difference between them and an overgrown stone you can spot them everywhere. Conomurex persicus as well as the fish S. rivulatus are invasive species that now occur in large numbers along Israel’s Mediterranean coast line.

For our first grazer experiment, we worked in a facility called ‘The Microcosm’ which is basically a smaller version of the mesocosm system with 11 instead of 16 controlled water tanks. Unfortunately, after the first experiment this experimental system was not available for us for further trials and because of this Luisa restored an old acidification system in the basement of the institute and modified it to become a temperature controlled system. It had the big advantage – in contrast to the microcosm- to be a flow through system, which saved us 3 hours of water replacement time every day and allowed us to have a larger number of replicates. Our second grazer and probably the cutest snail ever with their long proboscis and big eyes – Conomurex persicus. They also have a quite strong foot which they use to jump over the sea floor or to escape from your hand. Our first system, ‘The Microcosms’, in which we exposed our snails to 11 different temperature levels ranging from 15 to 35 °C. We exchanged the water in the jars every day to ensure a good water quality. A flow through system makes life much easier and snails happy 😊 Here we could apply 5 different temperatures simultaneously. In the first experiment in this system, we pushed our grazers to their thermal limit and in the second we narrowed in the point of maximum consumption.

The summer here seems endless. Basically all the time from May to September it’s hot and sunny,  what also means that Israeli people are quite spoiled when it comes to their comfort temperature to enter the water 😉 Erez’s personal rule is never go without a 5 mm suit when the water has less than 25°C. In the summer peak months July and August, the ocean is more like a bathtub with a constant temperature of 31 °C. Here you also never need to worry about rain or what kind of cloth to put on, because we can assure you – the only thing you need are shorts, t-shirt and sandals or beachwear.

Haifa is Israel’s third largest city and situated on the slopes of Mount Carmel in the north of the country. The city is very multicultural and famous for the beautiful Bah’ai Gardens. From our neighbourhood “Bat Galim” it’s only a short 5 min car ride or a beautiful 20 min walk along the sea to reach the institute. It worked well to find a flat share for Luisa for her time here and Bat Galim is a lovely place to live – directly at the beach with a nice promenade and good connection to public transportations. The nearby shore is popular for water sport activities such as wave surfing, kayaking and snorkelling. Sting rays and sea turtles are common visitors here and there is even a ship wreck in the shallow water. Luisa felt welcome here from the first day on since the atmosphere in the neighbourhood is very friendly and communal, many of the students and workers of the institute live here so there is a busy social life with frequent gathering in the local bar as well as a weekly poker night. Our lovely Bat Galim – “daughter of the waves”.

Israel is a unique mixture of east and west as well as old and new which creates a colourful combination of multiple cultures and beliefs. It is also a great place for travelling with its wide variety of landscapes from the green mountains of the north along the sandy beaches of the west to the desert in the south. In addition to this there is a large number of historical and religious sights. Since it is quite a small country you can travel to a lot of places during day or weekend trips. Luisa joined a local hiking group and used her last week to roadtrip with a friend and a tent through the country. In summertime it is common to do a “zoola” with your family and friends – so you bring a large sunshade, tents and comfy sofas, chairs and tables to build yourself a holiday residence on the beach. People here love camping and – of course – good food! It is all about special dishes, every holiday but also every day in the lab and the food here is delicious – hummus, falafel, kubah, sabich, shawarma, shakshuka, baklava and burekas …. It’s paradise! By now our amazing time in Israel is already over and together with the other teams from Chile, Japan, Wales, Indonesia and Madeira we are now back in Kiel to analyse our collected datasets and enjoy the golden autumn in Germany 😊