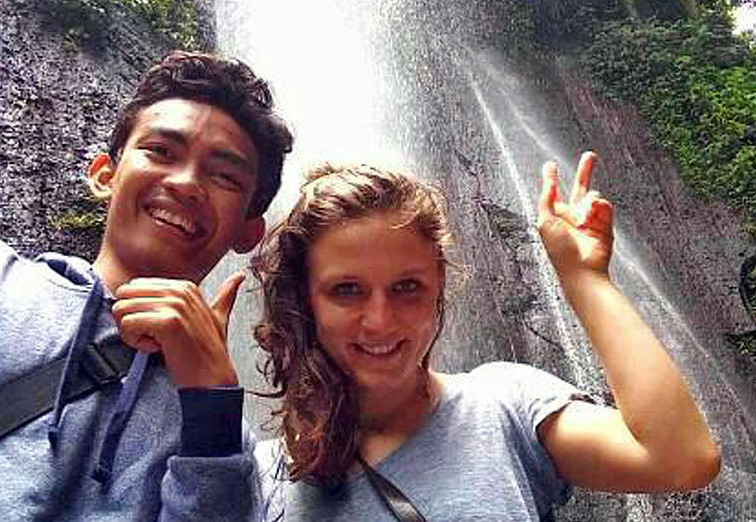 This year Team Indonesia consists of Miko from Indonesia and Leonie from Germany and we will conduct our GAME research work at the Marine Habitat Lab at IPB Bogor, Indonesia. The GAME project 2017 is about the possible change in consumption rates of marine invertebrate herbivores at elevated water temperatures – so we want to investigate the impact of heat waves on the performance of marine grazers.

After a four week preparation course at GEOMAR in Kiel, Germany, which took place in March, we two met each other again in Bogor in April. Bogor is located on Java, which is the most inhabited island of Indonesia. The Department of Marine Science and Technology itself is located in Dramaga, which is a district of Bogor.

Probably, the most remarkable thing about Bogor is the traffic or more precisely the traffic jam – called macet in Bahasa Indonesia. The main reason for the macet is that Bogor and all its suburbs, which have up to 5 million inhabitants, have no metro system. The common transportation is called Ankot, which is a tiny bus, into which you can fit 6 or more people. Ankots are everywhere and you often see more than 10 in a row. They do not have any schedule and stop where ever you want them to stop – what could mean in the middle of the street or every 50 meters. Furthermore, it’s possible that, if the driver thinks he has not enough passengers, he just stops in the middle of the road and blocks the whole traffic. So, distances in Bogor are quite relative and to cover 10 km can easily take up to 2 hours by car.

Beside the traffic, the rain is really special in Bogor. Since the city is located between mountains that catch the clouds, we have heavy rainfalls almost every day. So, one of the first things you need to learn here is that you never ever should leave your house without an umbrella and/or your rain poncho. Also wearing kinds of shoes, which are NOT made of plastic, can be a bad idea.

After arriving in Bogor, we spent our first weekend with taking a look at the lab and with going on a trip to one of Bogor’s numerous waterfalls. We went together with Dea, last year’s Indonesian GAME participant, and with friends of Dea and Miko. We enjoyed the cool and refreshing water and, of course, we took 1289649 pictures and selfies. In Indonesia, it is quite important to take pictures and selfies everywhere and at every moment, so one of the first steps of Leonies’ integration to the Indonesian society was to get an Instagram account.

After hiking the waterfalls, we got pretty hungry, but luckily there is a lot of food available in Indonesia – always and everywhere! You can eat at simple street restaurants called Warungs or you visit a kind of restaurants called Rumah Makan. Probably the most popular food is Indo Mie, this is some kind of instant noodles with fried chicken. In case you like it spicy, the Indonesian kitchen offers an astonishing variety of sambals (chili paste). For dessert you can enjoy Pisang Goreng (fried Banana) or some of the many exotic fruits Indonesia has to offer, for example Salak ( Snakefruit), Buah Naga ( Dragonfruit), Manggis (Mangostan), Durian (a really smelly fruit, with let’s say “special taste”) and many others. Having a Sundanese style lunch together.

But, so far so good, we also want to tell you something about our project.

First of all, unfortunately, Bogor is not located at the sea, but 60 km inland. This is a problem for us, because we need marine animals as test organisms for our research work. But it is not only that the sea is far. More than this, Indonesia has a really high biodiversity, but as a consequence the abundance of each single species is low. Another problem is that many species are poisonous, and we do not want to have them in the lab for our own safety. To find some suitable organisms we travelled to the Thousand Islands, an Archipelago located north of Jakarta Bay. We had to spend many hours in a bus and on a boat to get there. When we arrived there, we were so happy about finally being at the ocean, that we put our snorkel equipment on to check out the area and search for possible study organisms. But since Leonie has a crush on island doctors, she stepped on a sting ray and had to meet the local medic. Luckily, we got help from some friends during our trip, so we were able to collect some snails for the experiment. Collecting snails in the shallow subtidal.

As the long transport from the Thousand Islands to Bogor is really stressful for the animals (and for the Gamies as well), we decided to buy more animals at a local supplier in Jakarta, who normally exports ornamental fish and other animals for aquaria. This supplier has quite a nice offer (all kind of colourful fish, corals, anemones, sea cucumbers….) and we chose two species of snails which were collected in the south of Indonesia and on Bali by local fisherman. One of our test organisms.

As we are very far from the sea, we also had to order the algae powder, which will be the main ingredient for the algal cookies we will feed to the animals during the experiment. The best offer we could find in the internet was from China. Four weeks, 134 phone calls and endless discussions with Fed Ex later, we finally were the really proud owners of 25 kg of wonderful smelling freeze-dried algae powder! Unfortunately, the algae powder got stuck in Jakarta for a while, probably because the customs officers didn’t trust our research ambitions and wanted to double check that greenish powder ;-).

Being far away from the sea also means that you need to buy sea water from somewhere to equip your lab and you need to store it in big tanks. After not being in use for almost 7 month, the tanks, which are installed in the marine habitat lab at IPB, definitely needed a real make over. More than this, storing 3000 l of sweater in tanks can be quite tricky. It can, for instance, cause some serious lab flooding from time to time. This can, for instance, happen if the water from Jakarta Bay is super dirty and overburdens your filter system so that the filter gets clogged by all the dirt. Miko installing the filter system (already dressed up for his graduation ceremony). Leonie cleaning one of the water storage tanks.

After having installed a successfully running water-filter-pump system, it was time to build the set up for the experiment. Luckily, there were many buckets, hoses, airstones and other stuff, which were left behind by former GAME teams. However, while building the set up was an easy job, finding a microwave, which is needed to prepare the algae pellets, turned out to be quite difficult. That’s why we had to go to the Asrama International Dormitory and employ some friends’ kitchen as a lab to prepare the algae pellets for the animals. The good thing is, we didn’t need a permission letter for that. There is something that needs to be mentioned: If you think bureaucracy in Germany is crazy – go to IPB University and you will know better. You want to borrow something or go to another lab? You will need to get a letter to get a letter to get another letter that finally brings you the permission to go somewhere or to use something.

We finally could start our experiments two weeks ago and now we are curios to take a look at the first data that we will collect in 10 days. Fingers crossed that all our test animals didn’t mind the long transportation, the power breakdowns etc. and will eat a lot of algae and provide us some nice and interesting data. A little bit of data collection: The snails are ready for the oven so we can determine their dry weight. PS: Yes, Miko is wearing a pullover on the last photo, and no it’s not cold, and, yes, Leonie will never understand why Indonesian people wear pullover and jeans when it’s 30 degree or more.