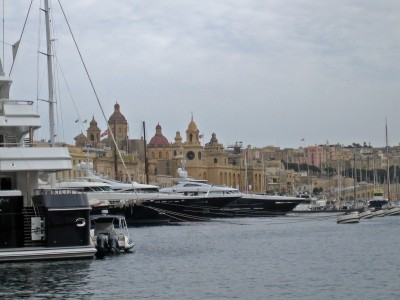 The scope of the Future Ocean’s massive open online course (MOOC) that is in production in Kiel is expanding to include perspectives from other parts of the world! How do people perceive the ocean in other countries? What state of the ocean do we want to achieve? What is the potential on the one hand and what are the challenges on the other hand to reach this status?

Luckily, the International Ocean Institute (IOI) decided to support this adventure. The IOI organises courses in ocean governance for people that are engaged with the ocean. IOI’s honorary president Awni Behnam is the driving force between the course in Malta. So what better place to ask the questions above than to students in Malta?

Students from Algeria, Egypt, Turkey, Kazakhstan and China gave us wonderful insights into how people in their countries view the ocean. The largest share of the Algerian population lives on the coast. In Turkey, people are very much aware of the territorial conflicts with Greece. Kazakhstan has only some Caspian coast. In China, a children’s song refers to the ocean as a mother. All these characteristics cause humans to have different perceive the ocean. Furthermore, these different perspectives also create different incentives to improve ocean government. The students emphasised the importance of awareness among the general population in this regard. Challenges exist concerning the combat of pollution, climate change, sea-level rise, ocean acidification etc.

Dr. Behnam had a decades-long career at the United Nations Conference on Trade and Development and devoted much of his time to the ocean. Being part of the Iraqi navy before attaining a PhD degree in the field of shipping provided a good basis. It was fascinating to talk with him about his experience. Above all, it was comforting to hear that Dr. Behnam is positive about the future of the ocean. Sure, there is still much to be done but the humans and the ocean are inseparable. The ocean will survive without humans. So, improving the status of the ocean is about human survival not that of the ocean.