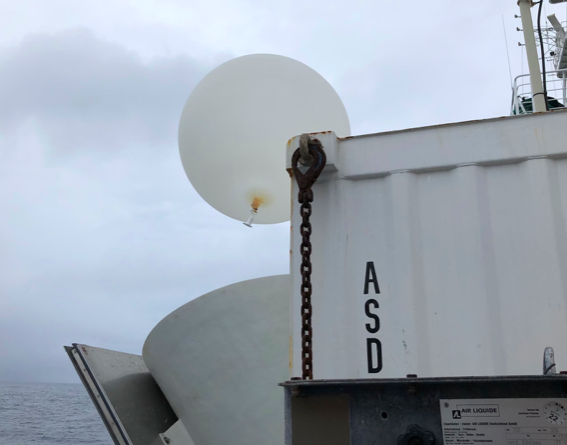 Every day the meteorological station publishes a weather report for the ship covering the upcoming days of the expedition. In addition to that, the meteorological station offers consultation to the scientists and the crew on the weather of the coming days to facilitate the planning of the expedition. This is important, as the weather influences which activities are possible to perform. High seas and strong winds might make it impossible to work on deck safely. It is thus difficult to deploy instruments.

These quantities are measured automatically once a second (except wind, which is measured four times per second) and are recorded using the METCO (meteorological computer) alongside calculated values like dew point and true wind. The METCO adds information on the location of the ship and the time, which it gets from the ship via DSHIP. In reverse, a number of measurements from the sensors are displayed in DSHIP (e.g. temperatures, wind, radiation). To ensure a high quality of the data, the instrument is inspected during the expedition by the technician. If there are issues with the data, a flag and comment is added. The data itself is not changed. Every hour the data is transferred to the DWD-Headquarters in Offenbach from where parts of the data are uploaded to the GTS (Global Telecommunication System) according to the standards of the WMO (World Meteorological Organisation) and used for meteorological models and forecasts.

Another job of the technician is the maintenance of the equipment and to make visual observations of the weather. This takes place every three hours and covers e.g general weather conditions, cloud coverage, types and height of clouds, observations on waves and ice.

In addition to the ship mounted sensors, on regular intervals balloons with radio transmitters are released. These balloons are filled with helium and carry sensors for temperature, humidity, air pressure and GPS for the position (which is used to derive the wind direction and speed). Their purpose is to create a vertical profile of the atmosphere. At the top a ballon reaches between 20 and 25 km height. The balloons are part of the program ASAP (Automated Shipboard Aerological Program) and are released from a special container on the ship.

Another German research vessel with a meteorological station on board is the R/V Polarstern where the weather station currently supports the scientist during the MOSAiC project.