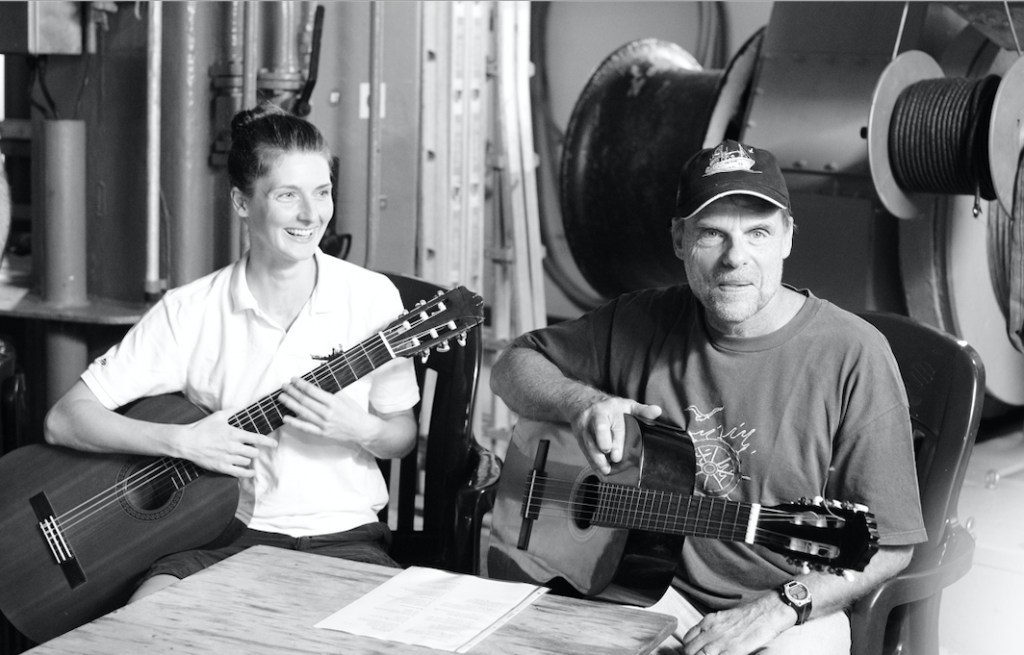 I like making photographs of mountains. Mostly because of the sheer beauty of them, but also because the process to do so is particularly simple and yet it generally makes for splendid pictures: first one has to climb another neighbouring mountain, then one has to point the camera in the general direction of the first mountain, and lastly one has to shoot the picture. The rest just happens on its own: your subject is too big to miss and it will never move around and ruin your frame. Light from every direction tends to bring out different geological features, all of them interesting. Clear skies resound with the snow covered peaks, clouds give the scene a more dramatic feel, and at night you can take beautiful shots with the stars in the background. Really, it’s very hard to go wrong. This is the complete opposite of my experience with photography aboard a research vessel.

My daily work as a data scientist at GEOMAR involves dealing with great amounts of data outputs of instruments I’m mostly unfamiliar with, and that are deployed far far away from the comforts of my desktop. Joining a scientific expedition is a big opportunity for me to experience the front lines of data acquisition and this enriches my work immensely. As an amateur photographer, this is a seldom opportunity I can not let go either. Still this is only my second scientific cruise and I am somewhat of a beginner at sea. Getting used to life on a ship takes time and the same goes for discovering all the new motives awaiting to be captured with the camera. It all begins with exploration, realising the function of the instruments above and below me and deciphering the shapes of the vessel. I am told everything on deck is packed with utmost efficiency and placed strategically for its deployment, however to my eyes and to the lens of my camera it just looks crammed. The first photographs slowly appear, but without the light, they are flat and boring, plain documents, inventories of objects. Back to square one, now I am hunting for light and shadows. The fact that my CTD watch and the time for dinner (which is religiously obeyed) both conflict with the best illumination at sunrise and sunset doesn’t make this task any easier.

After a week I start understanding the drill and now I know the places on deck where I can avoid the hustle of the heavy machinery and the scientist running up and down to take probes and retrieve sensors. There I wait patiently for the right illumination to enchant an object and for working hands of people to turn it alive… the continuous rocking of the boat messes up with my frame, but I will correct it, and then wait until the subject is clear again. It works!

After all of this, it seems almost paradoxical that most of my favourite shots so far would be of people. Between the curves of inanimate matter and the human condition, is not the later the  most difficult motif to capture? I am sure this is the case, and yet this persons fill the space with their constant displays of emotion; fleeting as these might be, if you miss the first one, the next one will come shortly after.

The best explanation I can produce is simple enough: whenever people ask me how to get better pictures of themselves I tell them to get busy doing stuff they love. Well, M159 sure is full of scientist that occupy most of the time with work they are very passionate about, it is only a matter of time until the next one does so where the light is nice and then… snap!