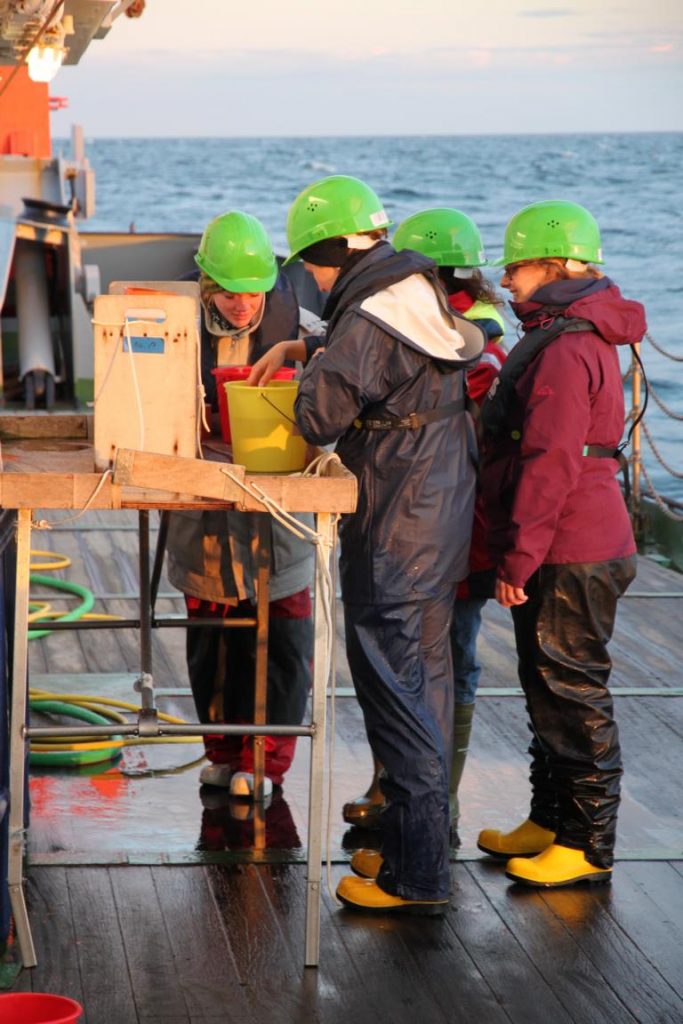 After the bongo net has been brought back to the surface, students filtered and sorted the plankton samples on deck. Photo by Christian Pansch

Doing science at sea is more difficult as on land because it is not easily accessible. Therefore we needed some special devices to get an insight into the marine fauna.

To measure different properties of the water body we used the CTD as he first device at every station. CTD stands for conductivity (salinity), temperature and depth. But it also measures the oxygen concentration and chlorophyll. After arriving at a station, the CTD was lowered to a few meters above ground in order to get a profile of the abiotic factors. We were also able to take water samples at specific depth for later analysis, as there are bottles attached to the device. The CTD is released into the water by a crew member of the RV Poseidon to take measurements of water column properties. Photo by Nora-Charlotte Pauli

We mainly focused on the planktonic and benthic communities. Plankton are all organisms drifting in the water column, whereas benthic species are organisms associated to the sea floor or solid substrata.

To sample the planktonic communities we used a bongo net. This net is made out of two nets with the mesh sizes of 300 and 500 µm respectively. Those are pulled through the water column at a specific depth and at a specific speed, so that it is possible to calculate the water volume filtered. The species were divided into micro- (<  2mm) and makrozooplankton (> 2mm). The microzooplankton mainly consisted out of small crustaceans like copepods and cladocerans. The makrozooplankton was dominated by comb-jellies and medusae. The Bongo net consists of two plankton nets with different mesh sizes (300 and 500 µm). The samples are collected in the buckets at the end of each net. Photo by Nora-Charlotte Pauli

To sample the benthic communities we used a Van-Veen Grab and a dredge. The dredge is actually a kind of trawl, which is a net that is pulled behind the ship over the sea floor in order to catch all species living there. The grab, which is a kind of shovel, is lowered to the sea floor and brings up a  sample of the seafloor.  This samples are then washed and sieved to collect all organisms. The benthic samples were dominated by polychaets, bivalves and gastropods. But also animals like sea urchins, sea stars, bristle stars and different crustaceans were found. The Van-Veen grab (borrowed from RV Alkor) filled with sediment from the sea floor. Photo by Christian Pansch

All in all these sampling techniques are based on simple ideas, but are very effective as we found 125 species.