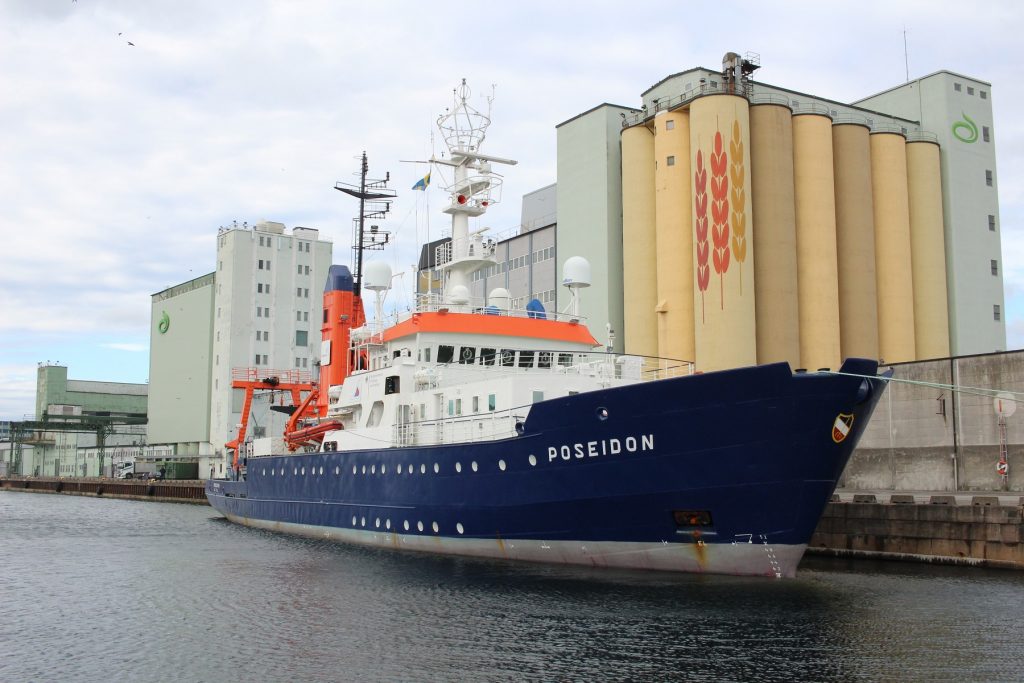 RV Poseidon in the harbour of Malmö, Sweden (Photo by Nora Pauli)

Now that Leila and Julia have already described life on board of the research vessel Poseidon, it’s time to talk about the ship itself.

With its 40 years of travelling the seas, Poseidon is the Old Lady of the German research fleet. It is 60.8 m long, 11.4 m wide and has a draught of 4.5 m. 15 crew members are needed to operate the ship. The operation radius is 4000 nautical miles and the main operational areas are the Northern Atlantic and the Mediterranean Sea.

When Poseidon was built, the engineers equipped it with state-of-the-art technology to enable up to 11 scientists to collect samples and perform their experiments at sea. Ever since then, its equipment has constantly been refurbished and supplemented. Its diesel-electric engines are specially isolated to reduce noise disturbance. Data about depth is collected by a highly sensitive multi beam sonar. Sensors measure salinity, sea surface temperature and wind speed in real time and this and many more data are shown on monitors in all labs. Oceanographers, biologists and geologists can make use of two cranes, 6 winches, a cantilever and a stern A-Frame lifting up to 5 t weight to bring their scientific devices from the working deck into the water down to 5500 m depth. Sample processing and experiments can be performed in one of the four laboratories.

Since the rolling and pitching of a ship in the waves might cause unpleasant feelings in the scientists’ stomachs during microscopy, as we learnt during the night shifts at 7 bft wind, Poseidon is fitted out with sophisticated fin stabilisers to at least minimize the rolling.

Even though Poseidon might not be the youngest research vessel, it is an excellent research platform and offers good opportunities for marine scientists to conduct their experiments, collect samples and or oceanographic data.