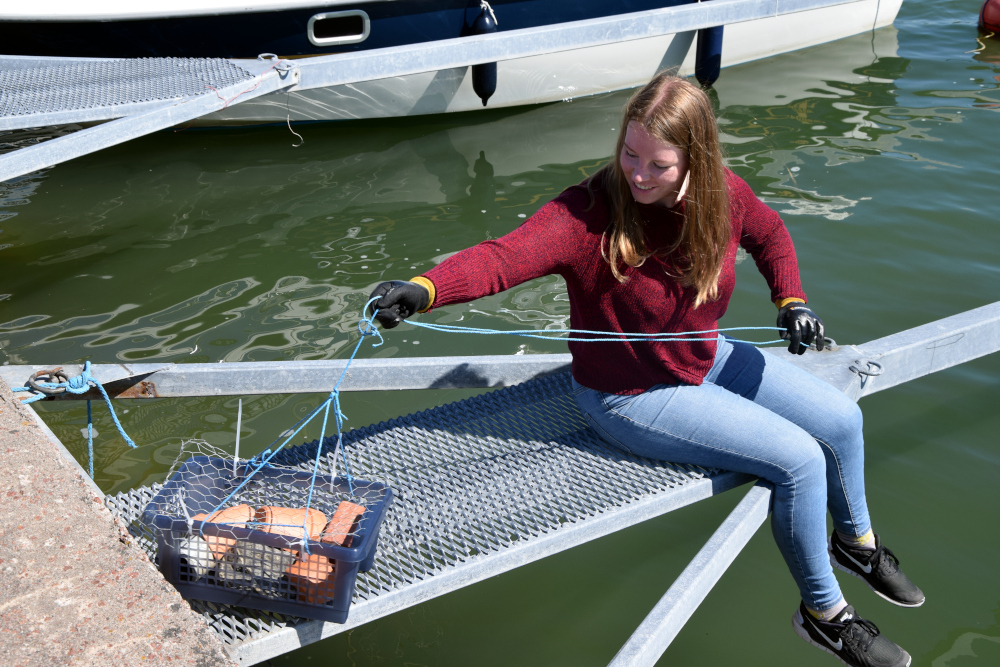 This year, after a long time, Finland has again become one of the European GAME destinations. While the Finnish teams of previous projects were hosted by the the Zoological Station in Tvaerminne, GAME has now moved a bit more to the north and found a new home in the Åland archipelago. However, Team Finland 2021 actually consists of two German students. Sarah van Dahl had originally planned to conduct her experiments in Japan, but it would not have been possible for her to enter the country, due to the entry restrictions for residents from places with high levels of Covid 19 infections (such as Germany) that prevailed in April and May. Hence, a backup plan was needed. Helen Lichtenstein also needed such an alternative, as she could also not travel to Cabo Verde to start her experiments in April/May. The reason in her case was the fact that the number of Covid 19 infections was increasing at that time. Therefore, the two decided to form “Team Finland”, since they were invited by Christian Pansch-Hattich, a former GAME participant who is now a scientist at the Åbo Akademi in Turku. However, getting to Finland proved to be somewhat complicated, as an official invitation from the dean of the Åbo Akademi was required, flights were limited, and a 3-day quarantine was necessary. Nevertheless, they made it to their working place in the outer parts of the Åland Islands at the Husö Biological Station, which belongs to the Åbo Akademi.

Under the supervision of Christian Pansch-Hattich, they are currently preparing their experiments with great motivation. However, this is not an easy task for them, since the amount of equipment in the laboratory that is suitable for light exposure experiments was limited. But Helen and Sarah brought some of the needed materials like LED lamps and a camera with them and now the laboratory is well equipped.

After some minor setbacks and adjustments of the set-up, “Team Finland” is now ready to start their first experiments in which they will investigate the influence of artificial lighting at night (ALAN) on the food consumption and activity patterns of the mud crab Rhithropanopeus harrisii and the freshwater great pond snail Lymnaea stagnalis. Fortunately, Sarah and Helen’s work in the laboratory is not greatly affected by the pandemic. Of course there are regulations regarding the number of people who are allowed to work at the station at the same time, but generally the situation is relaxed, since cases in Finland are declining and vaccinations are progressing.

Initially, Sarah and Helen still had to get used to the idea of not being able to travel to their original destinations in Japan and Cabo Verde. But it did not take long for them to get amazed by the scenery Finland has to offer and they were overwhelmed by the friendly and open-minded people.

Living directly at the Baltic Sea gives them the opportunity to pursue many waterfront activities. In their free time, they enjoy all the possibilities the station provides, such as boats, snorkeling equipment, kayaks, a sauna, and a volleyball court. And soon they may even get a third team member, Carla Soares from Cabo Verde, who is the initial team partner of Helen. As soon as the entry requirements will allow this, Carla will travel to Finland and conduct her experiments on ALAN with the shrimp species Palaemon adspersus or Palaemon elegans. We will keep you updated about the progress of “Team Finland”.  For further information, you can also follow GAME 2021 on Facebook (https://www.facebook.com/GAME.GEOMAR) and Instagram  (https://www.instagram.com/game_geomar/).