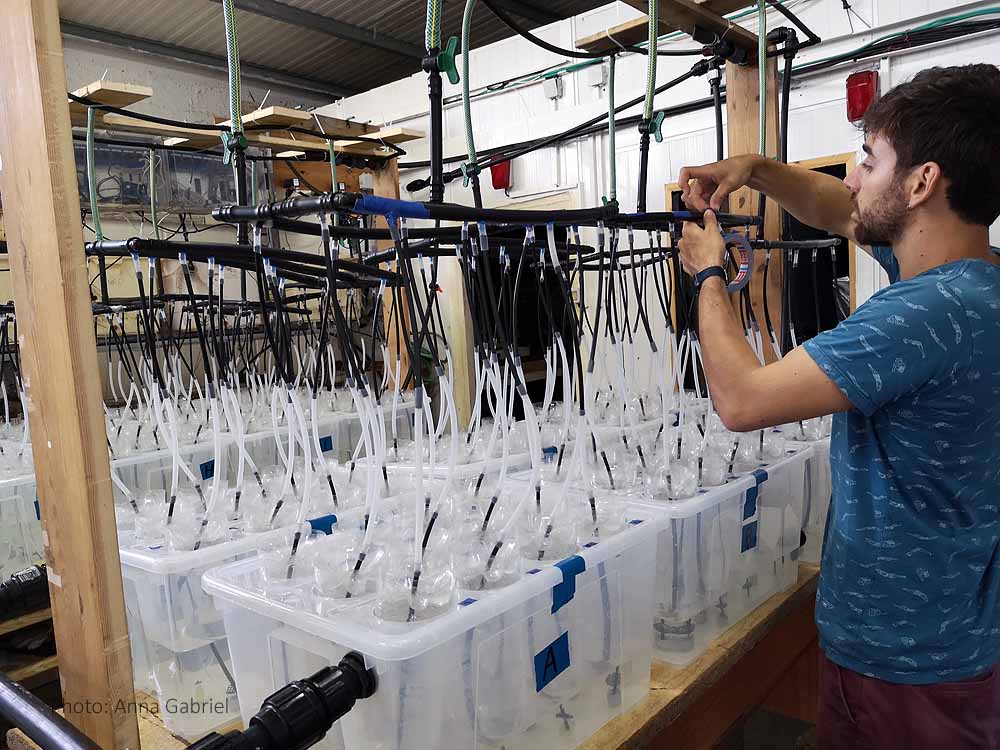 Good Morning and ma nishma everyone! We are Team Israel and would like to introduce ourselves to you on this issue of the monthly blog about our experiences in the GAME project. We are Anna and Lukas and unlike the other teams, ours consist of two German students. But even though both of us are enrolled in the Marine Environmental Sciences master program at the University of Oldenburg, we didn’t know each other and first met in Kiel during the preparation time for our experiment. After the time in Kiel, both of us arrived in Israel by the beginning of April.

Here, we are stationed in Haifa, Israel’s 3rd biggest city after Jerusalem and Tel Aviv. Since it is based at the north coast of Israel, Haifa has a moderate climate and in contrast to Israel’s south, it is fertile and green. Especially now that it’s springtime. Although, here, too, the housing market is overcrowded, the two of us found accommodation quite easily. Lukas lives in Bat Galim (which means daughter of the waves), only a few blocks from the city beach, while Anna lives with four Israeli housemates and a cat in Wadi Nisnas. This is the Arabic quarter of Haifa and about 15 minutes from the institute by bus.

Our host institute here in Haifa, the ‘Israel Oceanographic and Limnological Research (ILOR), was established in 1967. Although, the building was built over 50 years ago – at the seaside and at the end of the promenade – and shows visual signs of age and erosion, the institute is up to date and offers all the necessities and equipment for the experiments we are planning. Nevertheless, we are pretty proud of the system we build in the last weeks. Our supervisor Prof. Dr. Gil Rilov and the team of the so-called Rilov-lab sincerely welcomed us on arrival. Gil promptly invited his new GAMEies to his house for a Shabbat dinner, a social event to celebrate the beginning of Shabbat on every Friday evening.

Right after we had a tour through the institute, we got the chance to introduce ourselves and our project, in which we will compare the impact of microplastics and natural seston on marine benthic filter feeders. Soon we decided on the location for the experimental setup: we chose the tempered basement laboratory rather than the outside microcosm, as we expect very high temperatures during the summer. Suddenly, we were in the middle of a long and demanding but also very funny process of building our system, which took us about six weeks. Alongside lots of ups and downs, alternatives and creativeness, we were accompanied and supported by Dar Golomb and Maura Schonwald, the technicians of the Rilov-Lab.

To find suitable containers for our experiment, we visited the local supermarket and decided on bottles of a known soda-supplier due to its shape and smooth surface. To get enough of them without ending up drinking 168 bottles of tonic water, we were diving through Haifa’s trashcans. In the end, we constructed a perfectly working system consisting of the upcycled bottles, used wood and some new tubes and hoses. Aside of the construction works, a major part of the experiment involves the preparation and maintenance of a healthy microalgae culture, to feed our test animals sufficiently. Although, proposed to be very time consuming, we got a hang of it quite quickly and soon produced more algae than we could use. We are currently running our pilot study and try to adapt the time schedule for the main experiments to be as efficient as possible. We are optimistic to be able to start our experiments in the middle of June and gain more trust in our methods each day.

Our supervisor also offered us the opportunity to participate in a three days intensive course about macroalgae bleaching, which is a current issue for the Mediterranean Sea, especially at the coast of Israel. Not only during the intensive course but also on biodiversity surveys, in which we supported the research group, we learned a lot about the biodiversity and the ecology of the Israeli Mediterranean. This work also helped us to decide for a sampling site and our experimental organism Brachidontes pharaonis, an invasive mussel species, which originally comes from the Red Sea. Unfortunately, a high level of pollution with both, macro- and microplastics, was observed by us at all of the sampling sites. This emphasizes the importance of this year’s GAME project.

Although, among Israelis Haifa is known as the hard working city, there was still some free time in between the tough labour in the lab and field. Luckily, plenty of national holidays took place shortly after our arrival. We decided to follow the advice of our local colleagues and travelled around while we had the time and as long as the weather was not yet too hot.

Our first trip led us to En Gedi, a breath-taking oasis right next to the legendary Dead Sea, where we have been guided by two of our friends we met here. We hiked the national parks, enjoyed the thermal springs and took a little break in the holy city of Jerusalem on the way back to Haifa. On another occasion we visited the Sea of Galilee, which is located next to the Golan Heights and offers astonishing nature.

Of course, we couldn’t miss out on the opportunity to visit this year’s Eurovision Song Contest village in Tel Aviv. It was a great chance to experience Israeli hospitality and Tel Avivian nightlife at its fullest.

In conclusion, we enjoyed Israel despite the tight schedule of our program and are looking forward to the exiting time remaining here at the other end of the Mediterranean Sea.

Lehitra’ot and stay tuned for the next GAME update!