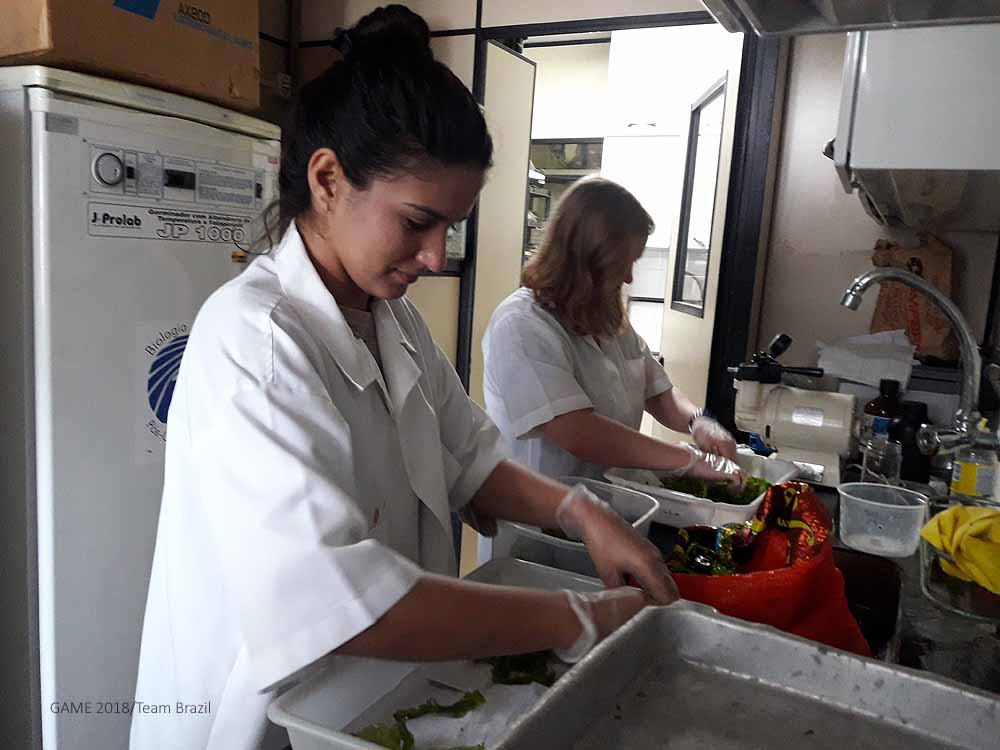 After 3 months since they started their work, Team Brazil has finished the pilot studies of this year´s project, which is about the effects of ocean warming on diet composition in marine invertebrate grazers. But who is Team Brazil? Konstanze, from Germany, is a Marine Biology Master’s student from the University of Rostock and Paula, from Brazil, is a student of the Universidade Federal Fluminense, who is currently doing her Master in Marine Ecology. We arrived in Rio by the beginning of April and started with arranging the experimental set up for this study right away.

This is the first GAME project in Brazil in which the experiments are carried out in the Marine Aquarium of Rio de Janeiro (AquaRio), which is the largest public aquarium in South America. The operators of the aquarium provide most of the materials and supplies for our experimental set-up and now we have 16 experimental tanks with 100 liters capacity each. We need them to keep the sea urchins, which we use as test animals, at different temperatures. But why are we using sea urchins? We decided to work with the species Lytechinus variegatus (the green sea urchin), even though the targeted test organisms for this GAME project were gastropods. This is because the marine snails that live in the Bay of Guanabara, from which we collect the organisms for our experiments, are usually very small and do not show per capita consumption rates that are high enough to reveal changes in food preferences – unless we use the snails in very large numbers. Sea urchins, which are much bigger than the snails, are very abundant here and they are very easy to keep in the lab. First time we collected individuals of the urchin Lytechinus variegatus at Itaipu Beach in Guanabara Bay. You better wear gloves!

For our first pilot study, we went to the beach of Itaipu and collected 114 sea urchin individuals there. The aim of this pilot study was to assess the general consumption behaviour of the animals along a temperature gradient. Furthermore, we want to find out if starvation prior to the feeding assays has any influence on the consumption rates during the assays. After keeping the animals in a tank to acclimate them to the lab conditions for five days, we evenly distributed 100 of the 114 individuals to 5 different temperature levels (i.e. 24°C, 26°C, 28°C, 30°C, and 32°C). Now the sea urchins were kept singly in small, numbered boxes to individualize them and to ensure that each sea urchin would just eat its own algal pellet. Furthermore, we tried to make these boxes “sea urchin proofed” through putting some rubber bands around them, to prevent the animals from escaping – what is something that they do frequently by crawling and pushing up the lids. We also placed stones on the lids of the boxes, because bigger urchins had enough power to get out of the box even with the rubber bands around it. They just crawled up to the lid and opened it. An urchin that escaped from its box is helping another one to do the same.

For each temperature level, we use a system of 3 tanks, which are connected to each other and which have a volume of 100 liter each. Furthermore, we used electric heaters to warm the water inside the tanks to the targeted temperatures and that is where our problems began. With our first set-up, the water inside the tanks never reached the desired temperature, because sometimes the heaters just turned off over night or the heaters were too weak. Even two heaters in one tank had for some reason not enough power to reach temperatures of 30 °C or 32 °C. However, after trying heating systems from different producers we could solve this problem and started the feeding assay a few days later than planned. Itaipu Beach is located at the mouth of the Guanabara Bay (Rio de Janeiro, Brazil) and has an extension of 4.5 kilometers. Our Brazilian advisor Bernardo da Gama and Konstanze are collecting sea urchins at Itaipu Beach for our first pilot study. Paula is transferring the sea urchins from the collection buckets to a 5000 L tank to begin their acclimation to laboratory conditions. First day for the sea urchins in the laboratory.

The sea urchins were acclimated to the different target temperatures at a temperature increase rate of 1°C per day. During the whole acclimation period, the sea urchins were kept in the lab and we fed them with pellets made from Ulva sp. powder and agar agar. For producing the food pellets, we tried a lot of different recipes in the beginning and needed quite some time to find a good way to generate stable, cube-shaped pellets, which do not fell apart after a short time. We started with making flat pellets that had a piece of a fine-meshed plastic net inside them for stabilization, but the sea urchins did not like them and even started to eat the net, so we switched to cube-shaped pellets and they were a success! To make them we used the same proportions of agar, algal powder and water and just increased the total amount of the components. We filled this algal-agar mix in silicone ice cube trays and let them dry until they became hard pellets. To get the big amount of dried Ulva material we needed to make enough of the pellets to feed all the 114 sea urchins, we had to collect insane amounts of fresh algae – what is not an easy task. That`s why we made trips to Saquarema, a city that is 70 km away from Rio, where a lagoon is in which large amounts of Ulva grow. The work-flow from collecting the Ulva material to having the algae-powder in hands included a lot of steps, like air-drying the algae fronds for 48 hours, then drying them in the oven for a couple minutes at the lowest possible temperature, crushing them in a blender and passing them throw a sieve with 34µm pores. So, it took us always a few days to do it, but the urchins seem to like the pellets a lot. Organizing the logistics that are needed to feed 114 sea urchins every second day was a big challenge for us, because of the large amount of time we spent with collecting the algae, drying them, making pellets, cleaning the urchin boxes, exchanging the water and feeding the sea urchins one by one, but we could finally manage it. Vila Beach is located near the city of Saquarema (Rio de Janeiro State).

Saquarema Lagoon, where we were able to get big amounts of Ulva sp. to make the food pellets. A sea urchin in its individual box is feeding on an Ulva pellet.

An Ulva pellet with big bite marks after a 24 hour feeding assay with a single sea urchin.

In the feeding assay of our first pilot study, we offered one pellet of about 12 g weight to each sea urchin individual, while half of the animals were starved for two days prior to the assay. We measured their consumption after 24 hours by weighting the amount of pellet that was left in each individual box. To eliminate the weight increase in the pellets by water absorption during the assay, we left some control pellets in boxes without sea urchins and also weighted them before and after the 24 hours assay. We also assessed the wet weight of each single sea urchin.  With these data we calculated consumption rates per unit sea urchin biomass for each of the different temperature levels as well as for the different feeding protocols: starved and not starved. To keep the animals in a good shape, we manually exchanged the water in the experimental units every day and checked the water quality daily by measuring nutrient and oxygen concentrations. We are happy to say that all individuals survived the whole experiment and that they even grew a lot! We are now finishing the second pilot study, in which we tested the palatability of different algal species at the ambient sea surface temperature of Guanabara Bay to see if our sea urchins actually feed on the different species that we have here. We are hoping that it will all go well and smoother than the first time.

We wish the other GAME teams all the best for the next months!!