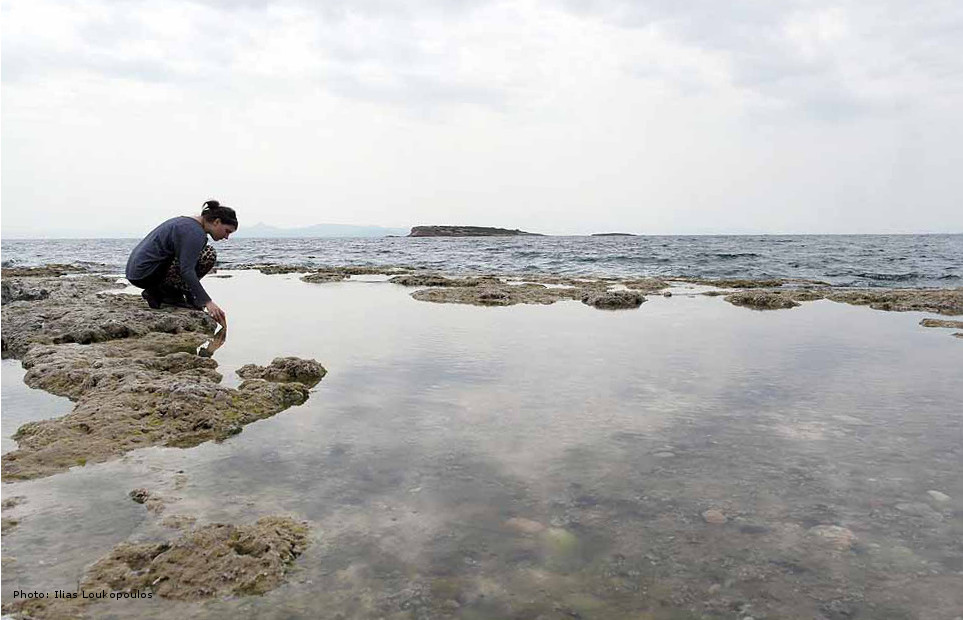 Me looking for anemones in a rock pool.

Through a series of coincidences beyond beliefs (and it would take much more time and space to tell the full story) I finally landed in Israel. I was all by myself, with two bags, a phone number and an address. By the way, I am Marie, a German student from Marburg and I am doing my master`s degree in Nature Conservation and Biodiversity. There I was – a little further south from Greece, where I originally was meant to be – ready to start my GAME experiment in Haifa.

The first time the GAME project was ever mentioned to me, I was diving in Italy and I had never expected to exit a plane in Israel only one year later to conduct my master`s thesis in marine ecology. I had no time to do research about the country, the people and the political situation. For me, Israel was this mysterious place. On the one hand, it was the war zone as it is presented in the media and on the other hand, I had heard people rave about landscape, cities and the breath of history that surrounds it all. Haifa is a very diverse city. This is the Arabic fruit and vegetable market.

My first impression was a light rain shower and it was supposed to be the last one for the next months. Especially in August, after the third heatwave since May hit Haifa, when I had to work outside, I longed for a bit of bad weather. But this would have been something very unlikely for Israel at this time of the year. While my anemones stayed surprisingly cool in their + 4°C and + 6°C treatments, I melted in the + 20°C over my central European average summer temperature and left behind my German work ethic, to do, once in a while, some quick catnaps in the nearest shade or in the safe air-conditioned insight of the lab.

My second Israel impression was after five minutes on the train to Haifa when I met a wrinkled old man, who started to talk immediately about the German-Israeli relationship through history. Seconds later, he called some friends to help me find an appartment. By this, I gained a valuable insight about Israel and its people, who are more straightforward, direct and, moreover, incredibly helpful than I had ever imagined. In front of the Dome of the Rocks in Jerusalem.

In Haifa, I lived in a small room by the sea and had the advantage of a beautiful beach walk or biking along the coastal road to work every morning. The Israel Oceanographic and Limnological Research (IOLR) Institute where I worked this summer, was built to resemble a stranded ship and is therefore located in the shallow water of Haifa Bay. After climbing up a bunch of confusing stairways you reach the rooftop of the institute from where you have a beautiful view over the bay and also the far away border to Lebanon. Despite the chaotic starting situation, I met amazing people, who welcomed me into their homes and helped me along with my scientific work. From the beginning, it was my project and everybody tried to stay out of it as much as possible. This gave me a feeling of scientific freedom and responsibility, I would have never experienced in Germany. In my opinion, this is because the Israeli education system differs a lot from the one we have. Due to the military service, Israeli master students are older and therefore more self-contained. Initially, when I worked on my pilot study, this was a bit challenging, but in the end everybody in the lab was willing to step in for a lesson in statistical evaluation, for ordering equipment for my experiment or for cheering me up. So I realized that in Israel, even though you work the whole day all by yourself, you are still part of a team. This came to light especially in the evenings, when the lab team went out to the local bar, met for the weekly poker night or turned one of the experimental pools in a whirlpool for a spontaneous party to celebrate someone`s paper. Mapping shore Biodiversity with my colleagues Ohad and Erez.

My luxuriously equipped lab was at the outside grounds of the institute, providing me with 10 temperature chambers, which were ready to be used (after some heavy cleaning) and a table with running sea water. In the beginning, I had some troubles finding anemones in the wild. At the end of the day, anemones of the species Aiptasia diaphane were kindly provided by the Israeli Sea Turtle Rescue Center, where they are feared as a pest species which occupies nearly all tanks. As a reward for their help, I spent some hours there and helped for example to clean the sea horse nursery and enjoyed one of the most beautiful beaches along the Israeli shores. Working in Israel is most often following the slogan: “You scratch my back and I” … give you some anemones/facilities/time/advice in return. A second species of anemones, Bolocceroides sp., was brought to me from the Red Sea by some research divers. Me working in the lab.

The most exhausting part of all was then the main study, during which I, due to the lack of my team partner Ilias from Greece, had to be in the lab every day for exchanging the water in my anemones’ jars by hand and marking the new lacerations, daily. (Through asexual reproduction, which is called laceration, the anemones split of little dots of tissue)

Despite my work, I also had a little time to explore the country. With new and old friends I travelled from the north to the south. I floated in the Dead Sea, in the Red Sea and in the Sea of Galilee. I climbed up to the mysterious fortress Massada at 5 am and I slept on couches in a kibbutz, in an oasis or in Bedouin tents in the desert, while witnessing the worst sandstorm in 100 years. We hiked to waterfalls, shopped and danced in Florentine, Tel Aviv until sunrise, and in Jerusalem we searched for traces of all Abrahamic religions. And then we found a waterfall while hiking in the desert. At the edge of the biggest crater in the world.