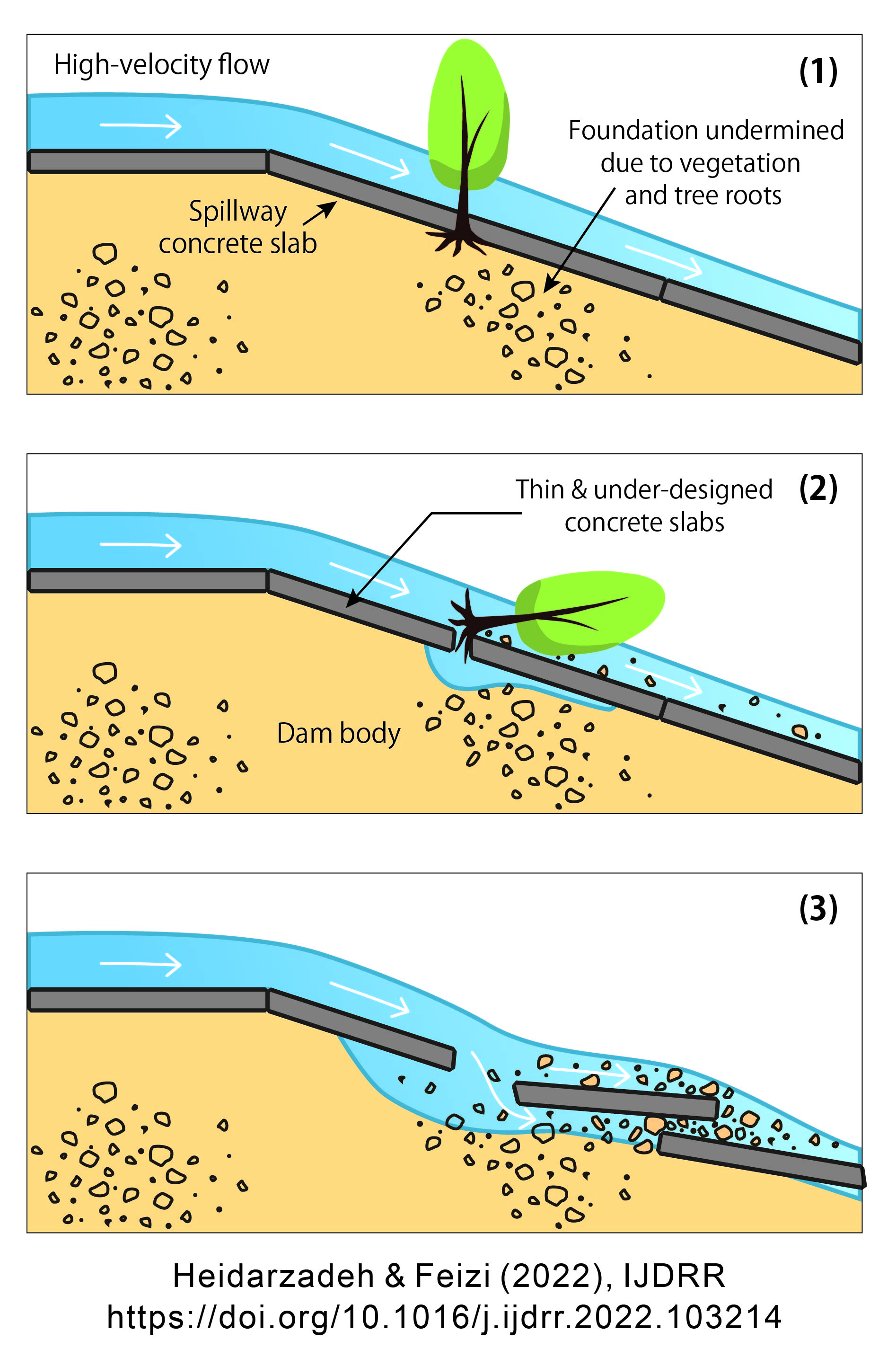 Senior Lecturer of Civil Engineering at the University of Bath (mhk58@bath.ac.uk)

A new study shows that the 2019 Toddbrook dam incident (Figure 1), where the dam was on the brink of collapse, was the outcome of (1) poor maintenance, (2) inadequate design, and (3) torrential rainfall leading to flooding.

During the incident, the concrete slabs of the spillway were washed away due to water injection below the slabs (Figure 2), putting the dam body underneath the slabs in direct contact with dangerous high-speed flow. It is no secret that soil is vulnerable to water flow. As a result, the soil embankment of the dam body was washed away locally creating a large hole. Given the high water pressure due to a full reservoir, the dam was on the verge of a global collapse, which could cause large death toll and significant property loss. Thousands of people, living at the downstream side of the dam, were evacuated during the incident. Previous dam break incidents worldwide have shown that they are associated with significant negative social, economic, and environmental impacts. For instance, 421 people were killed due to the collapse of the Malpasset Dam in France in 1959.

Multiple high-power pumps were hired to pump out reservoir water and bring down water level during the incident. At the same time, a RAF helicopter dropped off hundreds of aggregate bags (Figure 1) on the dam body hole to temporarily stop the erosion of the dam body. These joint efforts helped to control the situation over a few days and empty the reservoir; thus avoiding a potential dam break.

While different opinions emerged in the aftermath of the Toddbrook dam incident regarding the culprit, the new study shows that it was the outcome of a complicated interactions of various factors, which cascaded from three primary factors to secondary causes and finally resulted in the failure (Figure 3). The three primary risk factors were: (1) poor maintenance, (2) inadequate design, and (3) torrential rainfall leading to flooding (see Figure 3). While the structure was not adequately maintained, it suffered from poor design. For instance, the concrete slabs were too thin, unreinforced, and there was no stilling basin at the end of the spillway. Therefore, it is hard to say that the incident could be prevented had the structure benefited from good maintenance because it was underdesigned as well. On top of all these causes, we should remember that the severe flooding in the area was the reason that the two earlier shortcomings (poor maintenance and poor design) came to light.

The study also revealed that several landslides were generated during the incident. These landslides are most likely the result of rapid drawdown of the reservoir water level. In fact, the process of emptying reservoir water should be done in a controlled way and with a slow pace. According to Heidarzadeh and Feizi (2022), the reservoir water level was decreased rapidly, which caused the landslides. The most hazardous landslide was generated on the upstream slope of the dam, which could endanger the safety of the entire dam and presently requires significant work to repair it.