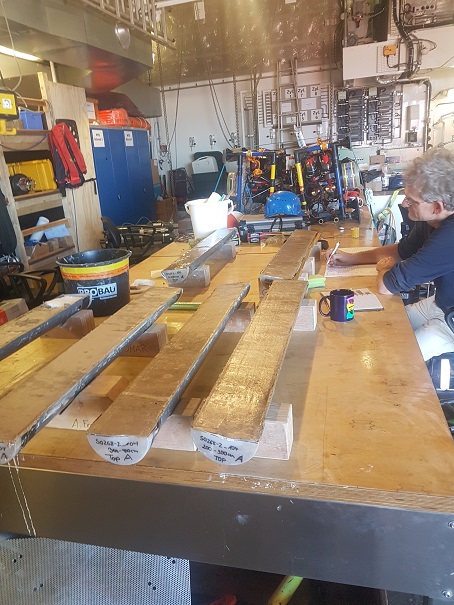 Until somebody came up with the idea of mining polymetallic nodules from the abyssal depths of the Pacific Ocean, this place was one of the remotest and quietest on our planet. Far away from the brute natural forces of storms, floods, landslides, tsunamis and the like which are affecting shallower seas and the continent, far away from dredging, trawling and trenching activities disturbing the seabed of the continental margins, and largely detached from the restless surface ocean with its whirling and meandering currents, this deep ocean interior is the ideal place for organic and mineral particles suspended in the ocean waters to settle and come to a permanent rest on the seabed.

The deposited particles accumulate steadily, year after year, millennium after millennium, into a layered package of sediment which is gradually covering the basaltic rock of the ocean crust underneath. Previous radiometric datings have indicated that sediments accumulate here at an exceptionally slow rate of 2 mm per thousand years, or 1 meter in half a million years!

With our heavy gravity corer we punch out 5-m long cores from the upper part of this sediment package, hoping that the succession of sediment layers contained in the cores will tell us more about past and present conditions that resulted in the formation of polymetallic nodules. Over the roughly 2.5 million years represented by these sediment cores, climatic fluctuations had their impact on the supply of wind- or water-borne silt and clay particles from distant continental landmasses, and on the phyto- and zooplankton and larger biota in the surface ocean layer, of which organic, carbonate and siliceous remains are steadily raining down to the seabed. The accumulated sediments thus hold an archive of climate-driven variations in continental erosion and biological production in the ocean.

Expectations that these variations in particle input might be traced back year by year are in vain, however. The material settling down on the seabed falls in an irregular cobblestone pavement of small and large nodules, preventing the formation of any form of regular fine-scale lamination. Moreover, the seacucumbers shoveling their meandering ways through the freshly deposited sediment in search for food are mixing up thousands of years of deposited sediment, and burrowing shrimps digging their tunnels into deeper layers may even mix up sediments of hundreds of thousands of years old. And then there are the diagenetic processes which slowly transform the chemical makeup of the sediment. Essentially driven by the degradation of organic material buried in the sediment, iron and manganese held in mineral grains may be released at greater depth in the sediment, diffuse upward in dissolved form and precipitate in newly formed minerals at shallower depth, including in the nodules that lie half embedded in the surficial sediment.

The result of millions of years of sedimentation, bioturbation and chemical transformation is revealed to the eye when gravity cores retrieved from the deep sea are extracted from the coring device by joint forces of the AWI-GEOMAR-BGR-JUB gravity coring team, cut into sections and split open lengthwise. Whilst the geochemists take the working halves of the cores into the cold room for sampling of solid sediment and pore waters, I as old-school geologist dedicate my attention to examining the archive halves of the cores, and writing my observations in a core description. Surprisingly, or maybe not, every new gravity core that came to deck so far appeared different from all previous cores, displaying different alternations of lighter and darker shades of yellowish and grayish browns, monotonous or patterned in speckles, mottles, patches, streaks, clouds, with diffuse boundaries or sharply outlined, and punctuated by the occasional pitch black of a polymetallic nodule defying the common knowledge that nodules are only found at the surface. Where the palette of different browns in these cores makes me think of caramel, nougat and chocolate, or the furs of different species of mammals, the Münsell colour chart is a great help to discipline me to refer to internationally accepted colour standards (such as 10YR6/4 light yellowish brown and 10YR3/4 dark brown). And then we should not forget to taste the sediment! For lack of a laser diffraction particle sizer on board the mouth is next best to distinguish the fine texture of the sediment. The squidgy feeling of diatomaceous ooze to the teeth is distinctly different from the soft crunchy sensation produced by foraminiferan shells, or the unpleasant grate of quartz sand well known to anyone whoever spent a day out on the beach. Although I do realize that this deep-sea sediment here has passed innumerable times through the guts of who knows what mud-eating deep-sea fauna, I find this geologist’s reflex hard to suppress.

The detailed descriptions which I make do not help much to answer why sediment successions are so different between different coring locations. We speculate that these may be related to the irregular topography of the basaltic basement over which the sediment deposits are draped, dissected by north-south trending faults delimiting uplifted and subsided basement blocks. The valleys located above subsided blocks may receive a higher input of sediment and organic matter compared to the adjacent higher grounds, whilst the thinner sediment drape on the uplifted blocks may be affected more by fluids diffusing from the underlying basaltic basement. On a larger scale, the gradient in surface ocean biological productivity, decreasing from east to west and from south to north, may explain some of the differences between cores from the German and the Belgian contract areas. Further answers to those questions may be provided by the geochemical analyses that are still to be done back home.