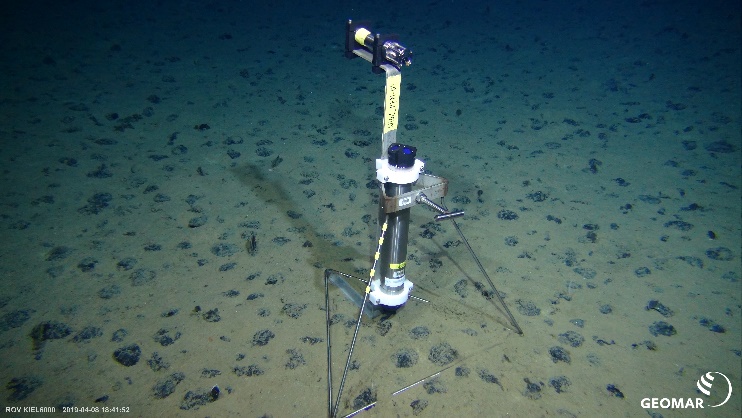 Sensor platform with a optical backscatter sensor an an ADCP.

The first half of the cruise has passed and we’ve finished the baseline studies in the Belgian license area. Doing my PhD research in marine geology at the Royal Netherlands Institute for Sea Research (NIOZ), my main interest is the particle dynamics in the bottom boundary layer (i.e. the layer close to the seafloor). Within the MiningImpact project we are interested in the extent of man-made sediment plumes, as these could smother any fauna living on the seafloor. To study this we have deployed an extensive sensor array (commonly known on the ship as BOBO and the dwarfs) in the German license area at the start of the cruise to record the concentration of particles suspended in the water as well as the current speed and current direction. We created a plume ourselves by dragging a heavy dredge over the seabed. Although the sediment plume you create by doing this is small compared to the one which would arise from industrial mining equipment, it does tell us something about the dispersion of the sediment plume. Moreover, an eddy, a large scale vortex in the water column, is on its way to the German license area. Even at the seabed at 4 km depth, the passage of such eddies can be noted by increased current speeds. It has been suggested that these enhanced currents may be sufficient to resuspend the drape of freshly deposited and still very watery sediment settled out of a mining plume (or the plume created by our dredge experiment), and spread sediment over a much larger area. Thus, eddies could have major implications on the size of the area that eventually will be impacted by man-made disturbances.

But how do we actually sense the deep-sea? The platforms we have deployed all contain multiple sensors which use different methods for measuring either turbidity (the particle concentration) and part of the sensors is also used for measurements of current speed and direction. For example, the BOBO (BOttom BOundary) lander, a 4 m high yellow tripod, is equipped with 2 optical backscatter sensors and 2 ADCP’s. The optical backscatter sensors record turbidity based on the amount of emitted light that is scattered back from particles suspended in the water column. The ADCP’s use a similar method for measuring turbidity except that they use an acoustic instead of a light source. For measuring the current speed and direction these ADCP’s make use of the Doppler effect. This effect is the apparent change of frequency of a sound (or light) wave when the wave source moves relative to an observer. In our everyday lives we experience this Doppler effect when a police car, ambulance or firetruck is passing by with high speed and we hear the sound of the sirens changing. The ADCP emits three of four acoustic beams in different directions and receives the signal that is backscattered from particles moving along with the flow of water. From differences in frequency received from different directions the sensors calculate the velocity of the particles relative to the sensor, and hence velocity of the flow of water. Another characteristic of the ADCP’s is that they can profile the water column, allowing us to take measurements over several meters distance. The 14 dwarfs, 1 m high tripod frames, which we have distributed over the seabed by means of the ROV, are all equipped with one or two of the optical or acoustic sensors and were distributed over the area by the ROV to extend our sensor grid.

All to do now is wait until the end of the cruise when we will pick up the sensors, and after 6 weeks of anticipation read out their recorded data and learn more about this subject.