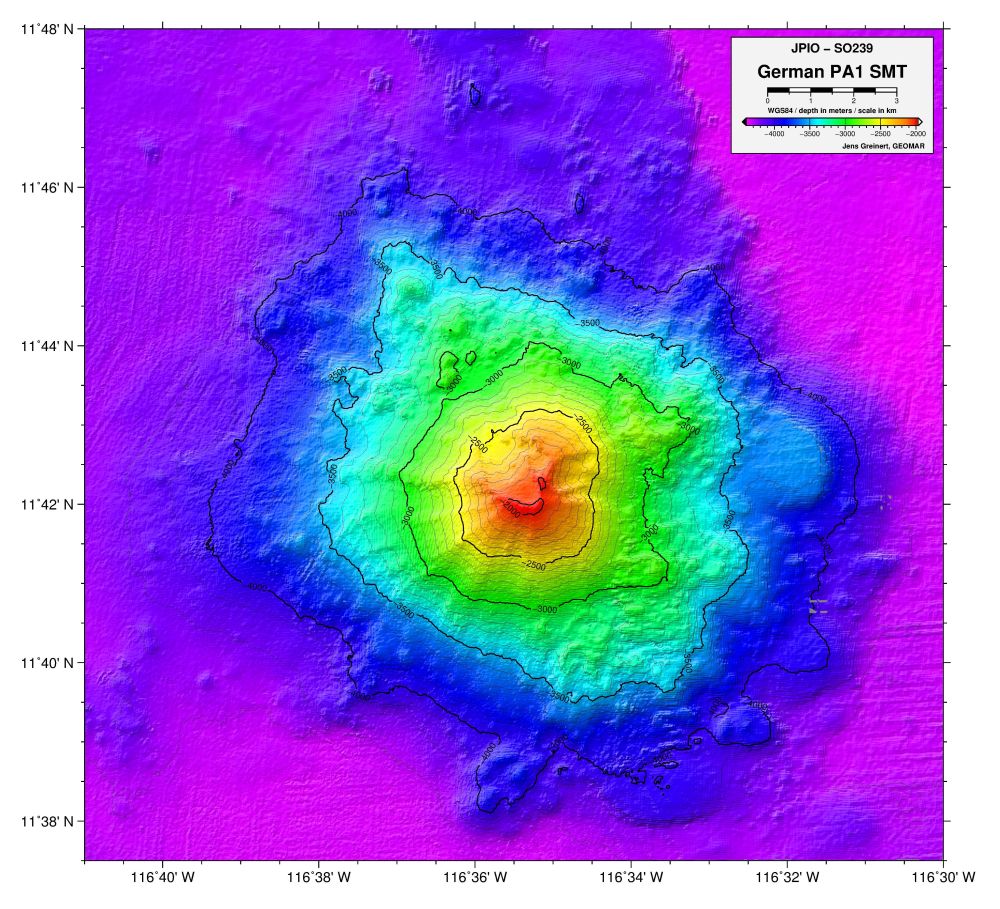 “Time flies when you have fun”, this might be even truer when you have fun while working with the most modern research vessel of Europe (the world?) equipped with the best hydroacoustic systems available at the moment. I am a marine geologist and for my work I need to know the morphology of the sea floor, the bathymetry. Bathymetric maps are created using echosounder systems that send out an acoustic wave (a ping) and measure the time the echo needs to return to a hydrophone array. Knowing the sound velocity in water and its changes with increasing water depth, the exact depth of a certain position at the seafloor can be determined. This is commonly done by simpler ‘singlebeam’ echosounders on almost all vessels. On the new SONNE, we have a deep-water multibeam system with the highest resolution commercially available, the only one of its kind so far on research vessels. Multibeam systems send out ‘multiple’ beams along a line forming a swath of up to a 130-degree swath angle. Depending on the water depth, we map a line of soundings that is several kilometers long (17km when the water is 4000m deep). The resolution, or the area that each of the 432 beams ‘Sees’ on the seafloor, is 70m by 35m (having a beam angle of 1 degree across and 0.5 degrees along the track). This might sound quite large (a third of a Football field), but nevertheless you get an incredibly detailed map of the sea floor in 4000m depth.

We use the multibeam system to map the areas we are working in because we need to have a very good knowledge of the water depth and the look of each site where we deploy our sampling tools; even more importantly, we need this for safe deployments and dives of the AUV and the ROV. The AUV (autonomous underwater vehicle), runs autonomously; planning the survey lines according to the bathymetry before deploying the AUV helps prevent that the AUV needs to change the altitude over the seafloor too often; if it does, you cannot get good images. During ROV dives we use the bathymetric maps to guide our observation and sampling track, we know at any time in which direction e.g. the caldera of a submarine volcano lies that we want to look at or where steep flanks are for sampling sponges and corals. If you have no bathymetry, you are ‘fishing’ in the dark.

I love planning the track lines, thinking about sailing speed and swath width to get the maximum out of the system. I also love making the maps after the survey is done. Yesterday evening I talked to one of the people from the scientific and technical service (WTD) of SONNE and we chatted about the excitement when you look at a new data file, plot it the first time, merge it with other lines and all of a sudden see the seafloor how it really looks like. Possibly, 90% of the times we do this we are the first people on earth who ever saw this particular stretch of seafloor. Mostly, we do this in front of our computers in the hydroacoustic lab, eager to see what’s new. Almost 100% of the time we are old fashioned explorers, charting the seafloor the very first time in detail and make new findings every few 100 meters.
Apart from being an explorer and making scientifically correct maps, it’s great to have a creative aspect as well.

You can make ‘boring’ looking contour maps that are correct or you can make more appealing looking maps by adding illumination (=light shading that adds a 3D effect), or you can make nice maps coding the different depths in color making the topographic features of the seafloor look real (e.g. submarine volcanoes, steep rises or depressions). Making good maps leaves much room for creativity and often results in many hours in front of the computer. Some ‘quick’ results are shown here. In the German license area, we visited one large seamount to observe and sample the fauna and to see how different the species are when compared to the Mn-nodule area in the deep-sea plain. An overview map is given as the first image (01), with a second one zooming into the central crater area (02). In image 03, the illumination from 330° was increased and the relief becomes more prominent. In comparison, image 04 shows exactly the same area using the same color palette but was illuminated from a 150° angle: all of the sudden the seamount looks like a depression. This impression can be enhanced if the color palette is changed and the shallow parts become purple and the deep parts red. Visually, there is no seamount anymore but only a deep pit; all with the same data, it is just how you present them.

The last three images show a swarm of little seamounts on the way from Balboa to the CCZ. The deep sea is scattered with them, they have no names and will most likely never be observed visually, but now we know they are there.

One thought on “SO239: Old fashioned explorers”