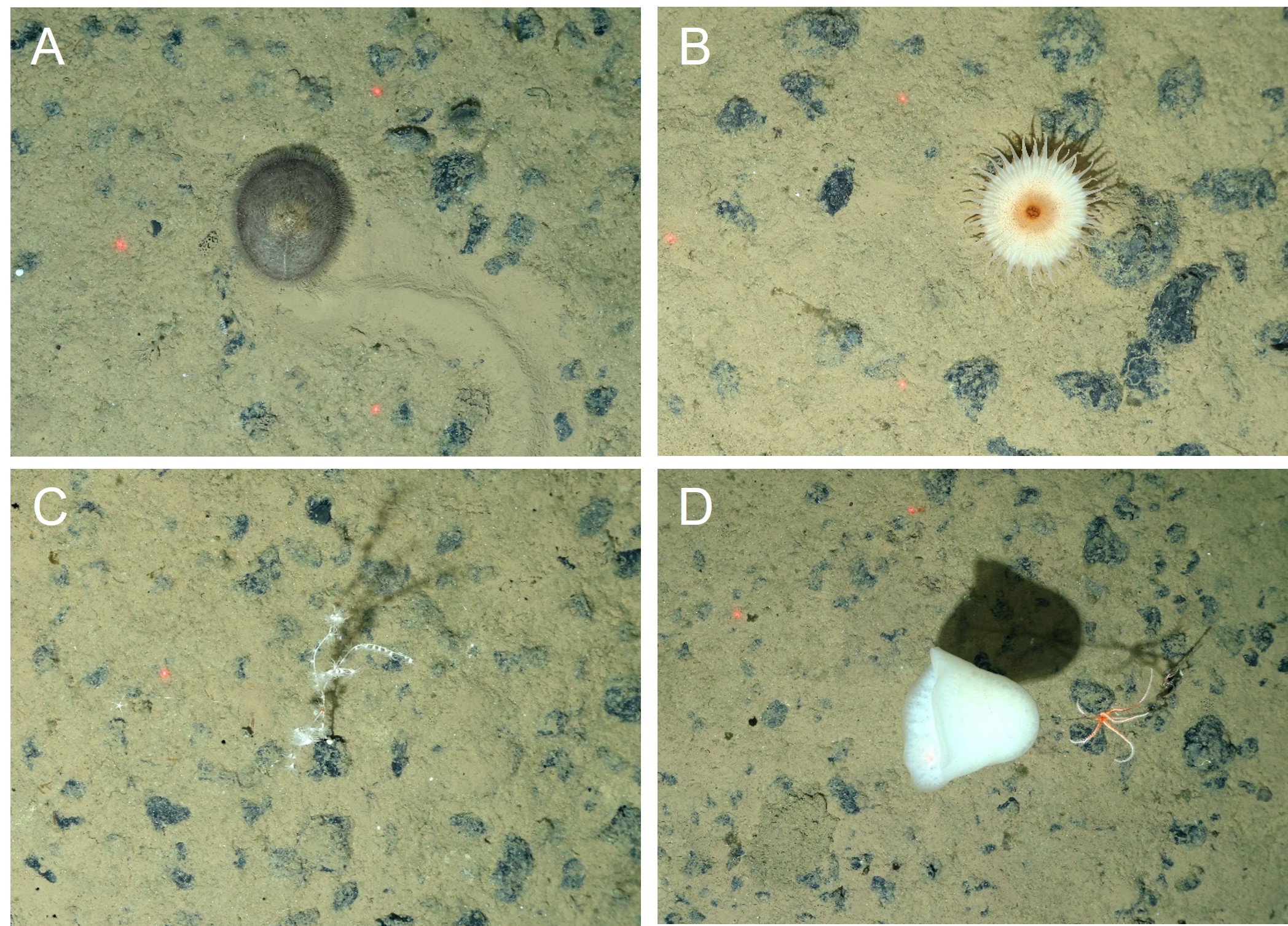 Creatures living on the seafloor in the Clarion-Clipperton Zone in the tropical North Pacific at 4100 m depth: (A) sea urchin, (B) sea anemone, (C) deep-sea cold-water coral, (D) glass sponge with starfish on its stalk. Photos: OFOS Team SO295

The deep sea is generally considered that part of the ocean where little to no light penetrates the water column, approximately below 200 m depth. The average water temperature in the deep sea is about 4°C and continuously dropping with depth. An entirely unhabitable place for us humans.

The creatures living below that depth, however, are very well adapted to their dark and cold surroundings. Here in the middle of the Pacific Ocean we work at 4100-4500 m depth, where it is pitch black, 1-2°C cold and things generally happen veeeery slowly. At the seafloor, food sources are scarce and most of the animals rely on particles that trickle down from the sunlit surface ocean. At or near the seafloor settling particles are quickly taken up by specialized creatures. For example, feather stars or sea anemones catch food floating by with long and hairy arms or tentacles. Or glass sponges, which filter seawater through their pores to trap particles. And then there are mobile creatures such as sea cucumbers, sea urchins or brittle stars freely crawling around in this dark place, always on the lookout for tasty food particles that have fallen on the ocean floor.

Now of course, like in every ecosystem, there are also predators in the deep sea, which take advantage of all other peaceful, detritus-munching creatures. There is a variety of beautiful but deadly looking starfish roaming the seafloor constantly on the hunt for small helpless creatures they can devour. And, have you ever heard of carnivorous sponges? No? Well, they exist. In the deep sea. Looking nothing short of stunning.

Obviously, there are many other crazy cool creatures inhabiting the seafloor at a depth of several kilometers, but listing them all here would maybe turn out a little long and boring. Therefore, I’ve decided to just write about my favorite deep-sea creature from here on: The sea cucumber. (Please don’t stop reading! I promise they are really cool!)

Before writing this blog post, I have browsed the web for other articles about deep-sea creatures and I got the impression that they are usually biased towards fish. I even came across a website stating: “You cannot possibly design a less-interesting animal than a sea cucumber.”

But before we dive into the greatness of sea cucumbers, I want to tell you a little about my work on board the research vessel SONNE. After all, this is a research cruise blog and you are probably already wondering where those amazing images above come from and how they were taken.

Aboard the research vessel SONNE is a device called OFOS, short for Ocean Floor Observation System. It basically consists of a steel frame with a still camera and a video camera mounted on. Additionally, there are four different light sources in the corner of the frame and a bright flash for capturing still images. The light sources are desperately needed because, as I mentioned before, the deep sea is a very dark place and in order for us to see who is living down there we have to illuminate the seafloor quite a bit.

The OFOS is typically lowered over the side of the ship, down to about 1.5 m above the seafloor, and then towed behind SONNE at a leisurely 0.5 knots (that’s less than 1 km/h). The data it records are transmitted to the ship via a glass fiber cable in real time. This means, while the OFOS is dangling around at more than 4000 m depth I sit inside the warm, dry ship and watch the live feed from the seafloor. While the entire dive is taped on a video recorder, the still camera takes a photo every 20 seconds. Three red lasers on the OFOS point to the seafloor at a distance of 40 cm to each other and give a sense of the size of the animals that appear on the screen. The video and still image data will later be used to make inferences about community composition, abundance and densities of creatures living at the seafloor. Combined with information on the seafloor topography, their preferred habitats can be described. This is especially important for our working area during this cruise, where we are investigating the impact of a manganese-nodule-collector test in 2021 on the benthic fauna.

Now, back to the sea cucumbers.

You may have seen images of sea cucumbers inhabiting shallow waters such as coral reefs. Usually, they are black elongate blobs, which I honestly do not find very attractive compared to other, more colorful forms of marine life. But at the seafloor in the deep sea it is an entirely different story. Because – despite the deep sea generally being devoid of the bright colors of a coral reef – sea cucumbers come in astonishing hues, from orange to pink to deep purple.

For you to understand my excitement about sea cucumbers, let me take you on a little journey:

Imagine you are sitting with me in the OFOS control room. It’s a small room with a lot of screens. The lights are dimmed so that we can fully embrace what shows up on the screens in front of us. At first, we stare at the seemingly endless blue of the ocean illuminated by the powerful light sources of the OFOS. As we get closer to the seafloor, round shapes start to be set apart from the background. At about 5 m above the seafloor they start to evolve into what looks like blackish stones. These are the metal-rich polymetallic nodules. Between the nodules we can see the much lighter muddy seafloor. Now we can already see the three laser points dancing on the seafloor. At 1.5 m distance from the seafloor, we stop the descent of the OFOS.

We can now clearly recognize the nodules and here and there fragile cold-water corals are attached to them. From another nodule grows a long stalk which terminates into a round white shape. It’s a sponge! Below the sponge a brittle star (a relative of starfish) is trying to find shelter from its predators, but its long arms cannot quite fit behind the slender stalk. Then slowly the OFOS starts to move over the seafloor as the ship is towing it along. We see parts of the seafloor appearing on the left side of the screen and vanishing on the right side.

Suddenly a trace of life comes into view: small depressions in the sediment twirling around the nodules. They look like tiny footprints. And then, slowly, at the end of the trace, a creature moves onto the computer screen. At first it is dark and fuzzy on the screen. It slowly evolves into a beautiful, pinkish animal, which is partially translucent so that its intestines are shimmering through. We can see that a sort of sail extents from one end of the creature into the water column, looking like it proudly parades its crown around. We know immediately, that we have found it. The most magical creature ever known to exist on the seafloor: a sea cucumber.

And on this OFOS dive we are super lucky! As a second elongate shape appears on the left-hand side of the screen. This time it’s bright purple and lying rather flat on the seafloor. As the creature moves into the center of the camera where the image is crisper than at the periphery, we can see its textured surface. It barely fits between the laser points, deeming its size to be about 35 cm long. The colors range from a very dark purple on the sides to blue metallic in the middle part of the animal. At the back end of the animal a little pointy skin structure protrudes like a hat out of the creature’s body. Another majestic sea cucumber in vibrant colors – very different from the dark blobs found in coral reefs!

Before we know it, both sea cucumbers move out of the screen and we are left with a sort of empty feeling. The OFOS had granted us two fun-filled seconds and now we wonder, is there going to be another sea cucumber? Will we be able to appreciate these wonderful creatures one more time? Well, the answer is yes. There are many sea cucumbers, one prettier than the other, silently crawling around in the shadow. To this date, hidden from human eyes.

But hopefully someday someone just like me will be sitting in front of the computer screen hoping to be blessed with maybe just a glimpse of these breathtaking deep-sea creatures, and now their wish will become true.

So, are you ready to finally see with your own eyes and embrace the full glory and beauty of deep-sea sea cucumbers?

(As a side note, in case you were wondering about the use of such pretty colors in deep-sea animals, the coloration helps them to hide from predators. As there is no natural sun light some animals produce their own light via bioluminescence. Then the reddish or translucent coloration of the sea cucumbers helps them fade into the background, hiding them from potential predators.)