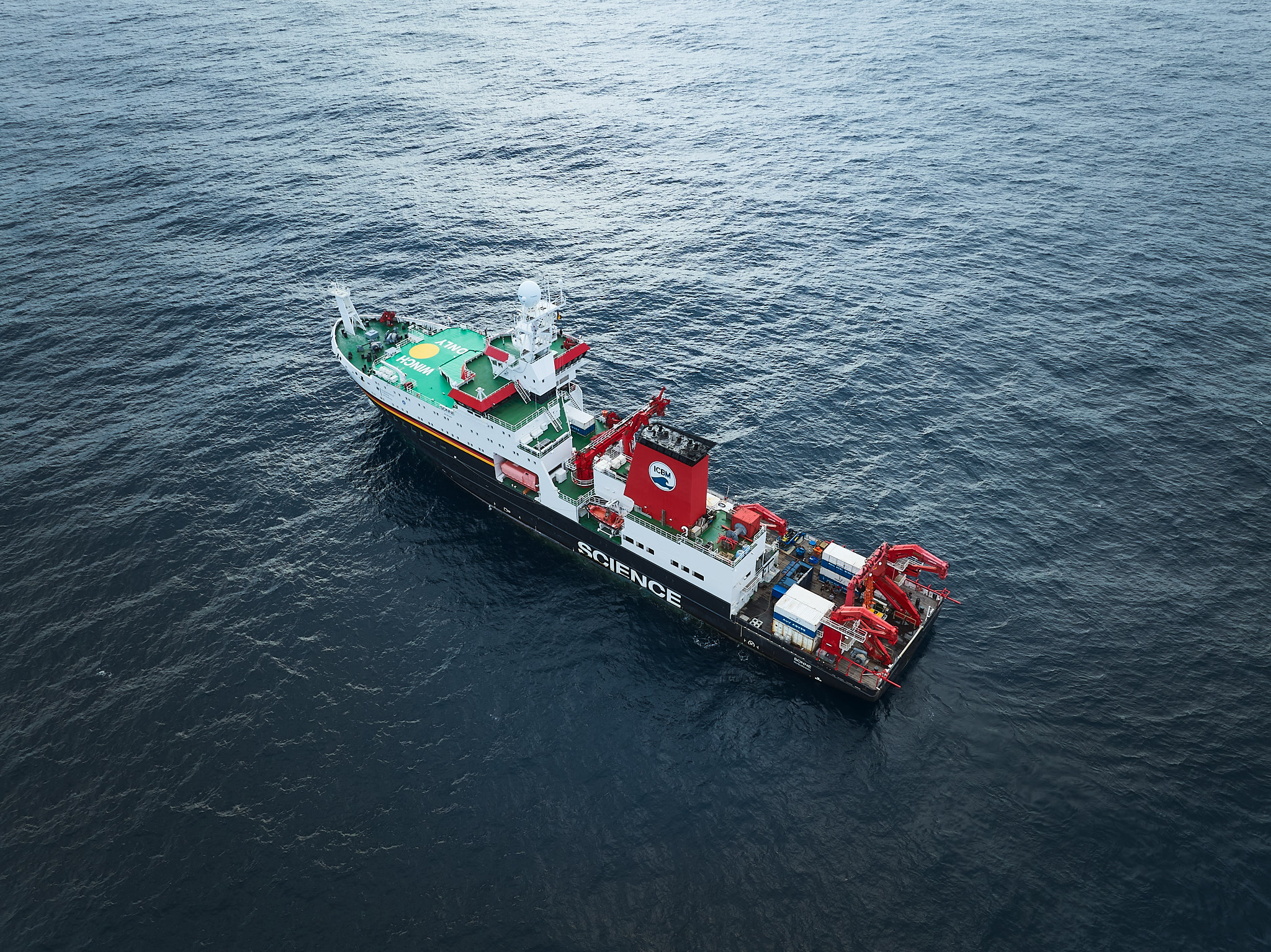 It’s been 17 months since our little team for oxygen measurements in deep-sea sediments from the HGF-MPG bridge group for Deep Sea Ecology and Technology has been at this very same spot, right in the middle of the tropical North Pacific. We are part of a group of 39 scientists, trying to assess the environmental impacts of polymetallic nodule mining in the deep sea.

Given that we’ve already been here on previous cruises, one could assume that we would recognize where we are. This, of course, appears impossible, we are surrounded by water, water and more water. Even if some things seem surprisingly familiar. The water, even when it’s dark and grey outside, is warm. The wind carries a warm humidity, we feel acquainted with. The sun burns when the sky is blue and the waves cradle us continuously. This time they allowed for a smooth transition since we left shore two weeks ago.

Now we barely feel the larger waves from the last few days, except for when we roll around in bed trying to sleep, when a coffee mug comes sliding across the table, or when during exercising the movement of the vessel pushes and pulls the body into and out of stretches at the rhythm of the sea. And when all the colleagues while discussing the work program in the conference room during daily team-meetings move from left to right to left to right like pendulums in perfect harmony. It looks funny and some classic music would go along well with it (or for those who know the carnival in Cologne – after all we are on board on 11 November at 11:11 am – a nice song to “schunkeln”).

Also many of the faces that made SONNE their home for eight weeks look familiar. And so do a large number of scientific instruments and laboratory set-ups. However, really recognizing where we are, is only possible once we dive into the deep blue – the most remarkable feature of recognition can only be found in more than four kilometers depth. To us, it is only visible through the eyes of the cameras that are installed on high-tech robots like the ROV (remotely operated vehicle).

The ROV can be sent to the ocean floor through a cable connection that allows for control of its thrusters, two robotic arms and many more features that can be used to deploy equipment and take samples. What becomes visible to us through this robot with its bright yellow hat, is the seafloor. It is covered by uncountable polymetallic nodules, lying half-buried like black potatoes on the seabed. And in the German exploration contract area, where we currently are, we now see a field that is void of nodules and marked with caterpillar tracks. These tracks were made by ‘Patania II‘, an underwater vehicle of the Belgian company GSR that carried out the first industrial polymetallic nodule collector prototype test last year. And it left remarkable footprints. The cleared area, which is the size of three soccer fields, looks like a construction site where the collected polymetallic nodules are piled up every several meters in 1.5m high heaps that resemble gravel or charcoal piles along the road.

But before I drift off in the deep sea, let’s talk science! After all, this is why we are here! So let’s come back up to the surface and sit in our lab for a while. Our three-headed team is here to study oxygen. More precisely, how much oxygen is consumed in the sediments by anything that respires oxygen: microbes and small animals that populate the seafloor. We look at undisturbed areas, areas that got ploughed by Patania II, and areas that are covered with a layer of sediment that got suspended into the water during Patania II’s work and settled back down.

We do this by poking probes into the seafloor that can measure oxygen concentrations. These probes are mounted on instruments which we call profilers and which are placed on the seafloor by the ROV. We have two different types of profilers: one is equipped with optical fibers that have tips measuring only 1/3 of a millimeter. They are coated with an oxygen sensitive dye and driven vertically 30cm into the sediments, measuring oxygen several times per millimeter.

The other profiler uses electrochemical sensors that look like really fine glass needles with tips of only 1/30 of a millimeter! They measure in a much greater resolution and into a depth of 15cm.

Number three in our collection of deep-sea toys are the BFCs (benthic flux chambers). These chambers are placed on the seabed by the ROV and stay there for several days, sealing off a small patch of seafloor. The organisms in the sediments respire the oxygen in this confined space and we can measure how much that is by means of a sensor monitoring oxygen in the water trapped within the chamber. The BFCs are equipped with syringes that automatically take water samples from within the chamber at different time points for subsequent laboratory analyses.

In addition to these in-situ experiments, we also want to know how much the polymetallic nodules respire. This is not the polymetallic nodules itself, but all the microbes and small organisms living in and on the nodules. This experiment is set up in the lab. We put individual nodules into glass vessels, which are filled with water and void of any air bubbles, and measure how the oxygen decreases in the water over time. This is done in the cold (at 1.5°C) and in the dark (pitch dark), so that the nodules feel just like at home!

In the cold room and in these water-filled and airtight vessels we measure respiration rates of individual polymetallic nodules. Left: Nodule in incubation vessel. Right: Experimental set-up. Photos: D.Sevilgen

And why do we do all these measurements? Well, microbes represent the smallest organisms in deep-sea sediments but typically have the largest biomass at these depths. They dominate biochemical processes and element cycling. We hope to use their overall activity (which we measure by oxygen fluxes) as an indicator to assess the sedimentary ecosystem status and how this changes when it is disturbed.

When not at the seafloor, our profilers stand either parked in the hangar or in our lab when we work on them – a lab that usually looks very colorful and technical. There’s boxes, fridges and freezers, helmets, rubber boots, sensors of all kinds, cable ties of various sizes, batteries, tools, profilers, tape in different colors, laptops and much more, standing and lying around on the tables, the ground and in the cupboards. We assemble, disassemble, calibrate, grease, cut, fix, glue, test, program and control all the instruments going down and coming up, or the instruments in the lab, improvising along the way to optimize our set-ups. It’s like lego technic for grown-ups!

After a (few) day(s) of preparation we spend some hours with the ROV team in their control container, guiding them to where they can place our instruments, pick them up or take samples – if all goes according to plan. If not, if things break or bug, it’s time to trouble shoot. Music helps with that! If you walked past our lab, you would often hear country, bluegrass, 80ies classics and, depending on the mood and booster needed, classical piano music, the ROCKY IV soundtrack, or ACDC. This cheers us up during the long days as they are typical for research cruises. Work is carried out 24/7 and the vessel is full of busy and motivated scientists and crew members who somehow always are in motion. A full night’s sleep is a rare good for many onboard!

We usually work on different tasks at the same time, helping each other out where we can. And we laugh a lot in our little workshop, have scientific discussions, design dive plans, and add some German lessons for our American colleague (for which our white board comes in very handy).

Given that our tool boxes are well equipped and sorted, our colleagues often peak their heads into our lab to borrow something – a welcome moment to exchange deck-news and update each other on things we can’t see on our lab-monitor. The lab-monitor (there’s one in almost every room) allows to follow the different activities on board. In our lab it usually shows either the footage of the current ROV dive, the details of the ship (where are we, is any tool in the water, if so, how deep, what is the time and the important meteorological data), or the menu of the day. Three times a day, the kitchen staff keeps our engines running with nicely prepared dishes. They keep us happy and help us keep track of what time of the day it is – something that is easily forgotten on board. This being said, it’s already time for dinner – so, good bye and until next time, with more news from SO295.

[The author of this post was interrupted during the writing process by dinner, going on deck to watch the lightning, a group meeting, a few minutes in the hangar to help out a colleague, downloading and plotting data as well as a couple of nice chats with colleagues who entered the lab.]