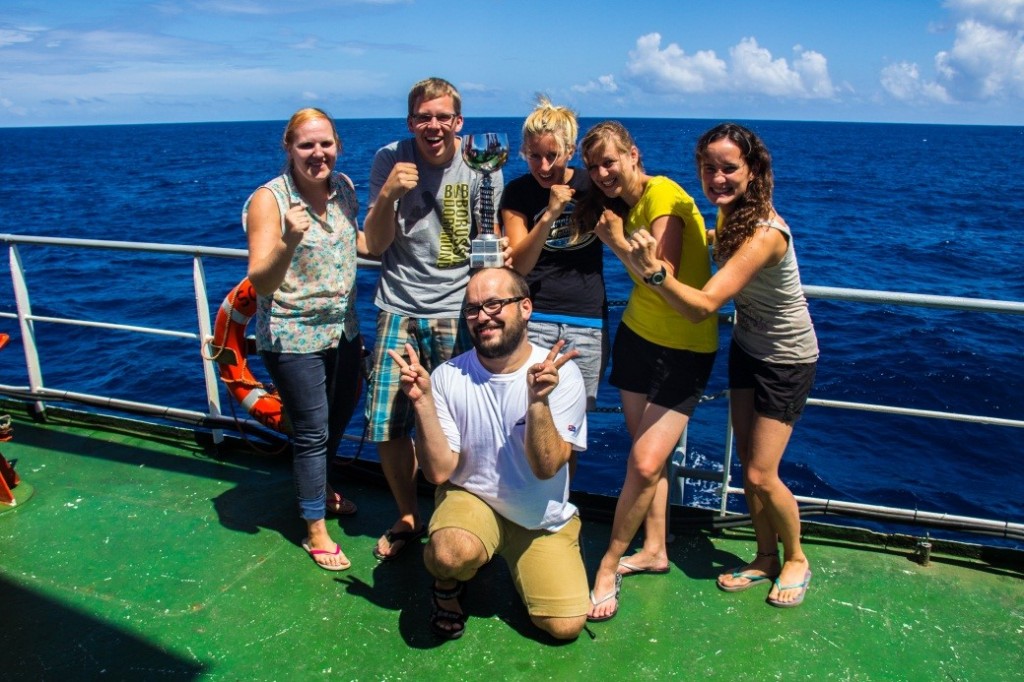 03:50 AM: Mr. Probz’s song “Waves” is breaking me from my dreams. But it is not the waves which are disturbing my sleep, it is the three hourly underway, also known as underwater, sample. And as the ocean does not sleep at night there is also a sample to take at 4:00 AM. Alright jumping from the upper bed trying not to wake up my roommate, getting some clothes and splashing cold water on my face to be pseudo-fresh, my shift can start with sampling the underway line.

But attention, you can’t simply take a sample. The most important thing while taking a sample, your vial, bottle, canister or whatever, has to have a Bedford number. Bedford number? Yes, and this has nothing to do with sleeping in a car or something like this. That Bedford number, containing 6 digits, makes your sample kind of unique. Behind this number the coordinates and depth where the sample is taken is deposited. Also the timing and information about the cruise are stored in the database after taking the sample. This system makes sure that everyone else can search one number and gets all the information he wants, because this number is used only one time. You can never buy this number again.

Safe system, but also kind of difficult when our CTD guy (Jessi) labels the 24 Niskin bottles from the rosette before operating the CTD and opening the bottles at different depths while running a profile. The scientists have to look at a piece of paper in order to get the right Bedford numbers connected to the depth and bottle they want to sample. Sometimes there is a bit of confusion due to some last minute changes of depth but till now it worked quiet well. For our working group, measuring trace gases (dimethylsulfide & isoprene) in the ocean, taking discrete samples, we labeled about 500 of our vials since we started 4 weeks ago in Durban. In the first days and weeks it was only a number consisting of 6 digits, but after labeling and labeling some of us just saw more than an ascending number. Some numbers sound good while pronouncing them out loud, other digits triggered good feelings while seeing one digit next to another, so everyone in the end had a kind of favorite Bedford number. Even with some numbers it was possible to mix the 6 digits in order to see the date of birth.

But today, the Bedford numbers did not influence our daily work. It was proposed that we would pass the equator, also known as THE WALL, from south to north at about 11 AM. Half an hour before some of us woke up the other scientists who had worked in the night to “celebrate” this moment. Many questions were asked: Is there a red rope on the ocean-atmosphere-interface we have to pass? Will we kind of jump on a wave from the southern to the northern hemisphere? Or will there be a big „baaang“? You could really feel the tension.

At 05:57:45 UTC (and not local time) we hit THE WALL at 0°S, 72°24E and it happened…….quite nothing…….except a flashing light from a camera. Due to winning the “Chemiker Cup” in Kiel, some scientists put the trophy into their luggage in order to have some pictures with the trophy all around the globe, and also to send greeting Germany, the world championship winner 2014! After this magnificent moment recognizing the change of the Coriolis force, we went back to work. Tonight we will sample the last CTD of this cruise.

But one question will still remain till tonight. Will the moon now be switched back again to our well known sickle after passing the equator? 😉 Oh and btw happy 30th birthday Helene Fischer!!