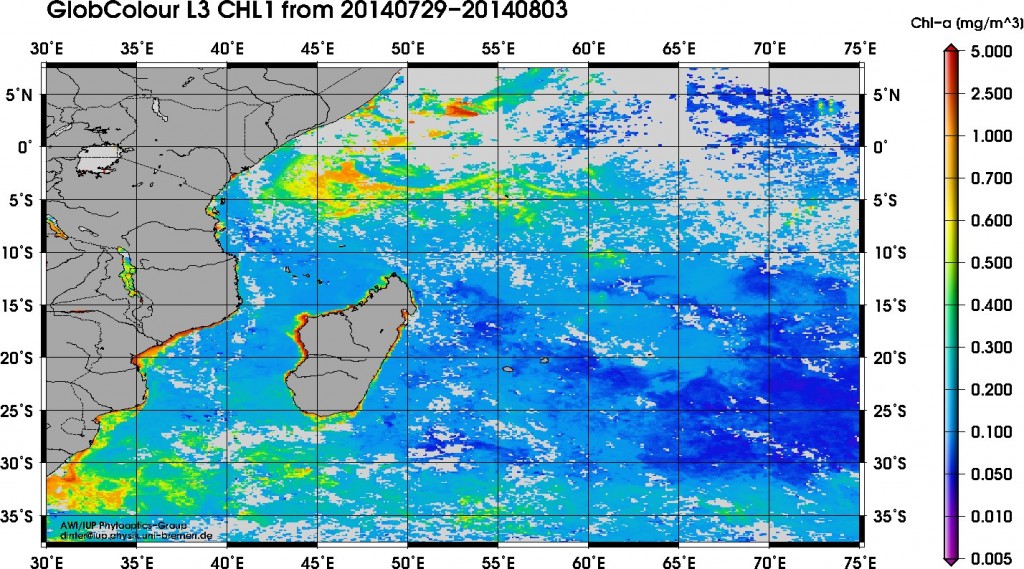 28.07.-03.08.2014 from Port Louis/ Mauritius to Malé/ Maldives
Here is the follow-up of our OASIS (“Organic very short-lived substances and their air-water exchange from the Indian Ocean to the stratosphere”) – SONNE SO235 cruise. The research cruise and the project are funded within the framework of the German national BMBF (Federal Ministry of Education and Research) program (project number 03G0235A). The aim of this research project is to investigate the air-sea gas exchange and transport of oceanic trace gases from the Indian Ocean to the stratosphere during the southwest monsoon. In the second week of SO235 from 28.07. to 03.08.2014, in tropical latitudes, the mean wind speed decreased from 12 m/s (6 Bft) to only 6 m/s (4 Bft) with a continuous south-easterly flow (Figure 1). Temperature and sea level pressure varied between 23° to 26°C and 1010 to 1014 hPa, respectively. We successfully launched 24 radiosondes every 6 hours to derive high resolution meridional cross sections of wind, temperature and humidity of the tropical Indian Ocean. Additionally, we launched two ozonesondes on 26.08. and 28.08.2014 to obtain vertically resolved ozone profiles.

Figure 2: Data from the drifter deployment at 6° S and 64° E. All data were measured in approximately 15 m depth (Graphs by Tobias Steinhoff).

On the evening of 28.07.2014 we started our first drifter deployment of SO235. The drifter consists of three parts: a floating buoy (looking like an oversized spear used for fishing); a 6 m long rope connecting the buoy to a 5 m long sack; and, at its end, an instrument cage. The instrument cage was outfitted with sensors for temperature, salinity, oxygen, CO2 partial pressure (pCO2), chlorophyll-a, and nitrate. The whole drifter drifts with the near surface current at about 15 m depth and we were able to conduct our water surface measurements in one water mass for 24 hours. Figure 2 shows preliminary data from the drifter for water temperature, dissolved oxygen, pCO2 and chlorophyll-a. The small diurnal variations can be explained by biological production. A second drifter deployment is planned for 04.08.2014 close to the Equator on the southern side. Further data analyses will be carried out at the GEOMAR in Kiel. Elevated concentrations of short-lived halogen and sulphur compounds often coincide with biologically active regions. The aim of our cruise was to sample regions with high biological production, as well as to derive longitudinal and meridional cross sections within the Indian Ocean, including high wind speed regimes. According to MERIS (Medium Resolution Imaging Spectrometer) satellite maps and continuous in-situ measurements of chlorophyll-a from our OASIS partner Astrid Bracher (AWI/ IUP) and her PHYTOOPTICS group we were able to adapt the cruise track accordingly (Figures 3 and 4).

We carried out a multitude of halocarbon measurements with two gas chromatograph-mass spectrometer and one gas chromatograph-electron capture detector. Halocarbon levels of our target compounds bromoform and dibromomethane were highly variable in the ocean and atmosphere above the Indian Ocean during the cruise. While bromoform was often elevated during SO234-2 in the sub-tropical Indian Ocean and especially in waters near Madagascar, the concentrations in the blue waters of the tropical Indian Ocean appeared a magnitude lower. During SO235, high wind speeds obviously coincided with low oceanic concentrations. Nevertheless, distinct variations of the two bromo- and several iodocarbons, including CH2ClI and CH2I2, were measured within the water column and will give new insights into the sources of these compounds. Additionally, incubation experiments were conducted to see whether a fast production may lead to increased emissions. Diurnal variations of the concentrations appeared in surface waters.

This evening the second long drifter and diurnal station will take place, which will last for 26 hours at 2° S, 72° E. So far, this is the update of OASIS-SONNE; we will be back again after Thursday 07.08.2014.