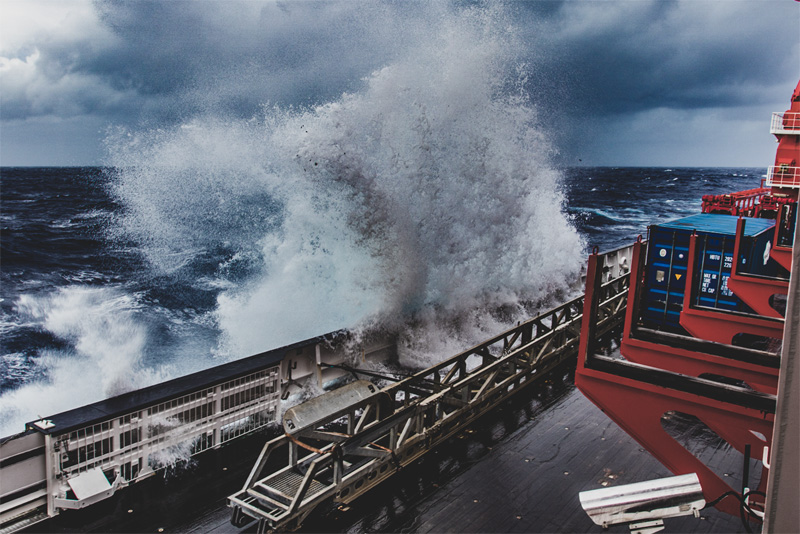 Two months at sea. Fiji to Japan. No land, possibly a few far-off ships passing by, and 38 scientists, many of whom are known only to each other through their publications. This was the setting for the beginning of RV SONNE cruise SO264. The anonymity was quickly remedied as we boarded the vessel on June 29th and spent the first night in the Port of Suva getting to know each other and our various backgrounds. Our science party is definitely international, with people representing 11 different nations. We officially embarked on our research cruise at 9:30am on June 30th, but the calm waters of the port quickly changed to 4-5m waves with intermittent rain for the first two days at sea. This was a quick and harsh introduction to seasickness for many, keeping us confined to our rooms (or bathrooms) for much of the time. The weather also delayed preparations for lab setup and equipment because of the closure of the main deck by the captain. This was not to be a problem, however, as we still had ~12 days until the start of sediment coring.

Time for science. The water sampling groups, having most of their supplies and equipment ready to go, began work on July 2nd, sending out the Multinet (sampling biology) and CTD (collecting water samples and measuring water properties). This team continues to sample the water column frequently, with a station approximately every second day. After the poor weather conditions subsided, the sediment group, technicians, and crew began to unpack storage containers and assemble coring equipment. This preparation work will continue up until the start of sediment sampling. Along with sediment and water groups, there are also scientists aboard that are responsible for bathymetry and sediment echosounding, which started once we passed into international waters. Stepping away from science, other interesting events have occurred this first week. One of the first tasks upon leaving port was to go through an introduction of the safety protocols for the RV SONNE. There was also an “abandon ship” drill the following day. We crossed the equator (specifically 0 degrees and 180 degrees) on July 4th at ~23:15 (UTC +12), a first for many of us on board. A certificate was given to mark the occasion, along with a water sample from the equator.

As for daily life, the RV SONNE has so far been an incredible addition to the research cruise experience. The chefs are great, as the food has been delicious for every meal. There is also a sauna and gym, allowing for extra energy to be burned off during down time. Speaking of time off, there has been a decent amount of it, especially for the sediment team, due to the long transit time (~12 days) to the first coring station. However, along with the amenities mentioned above, the RV SONNE provides a library with a vast collection books and a large TV where people can gather to watch movies brought from home.

As week 1 aboard the SONNE comes to a close, we continue to look forward to our arrival at the main coring site, located at ~33 degrees North. In the meantime, unpacking and lab/equipment setup will continue along with water and biological sampling, and science meetings will be held every other day. Excitement is high for the next 7 weeks spent on the RV SONNE collecting microorganisms, water, and mud from the North Pacific Ocean!

3 thoughts on “Week 1 aboard the RV SONNE (English)”