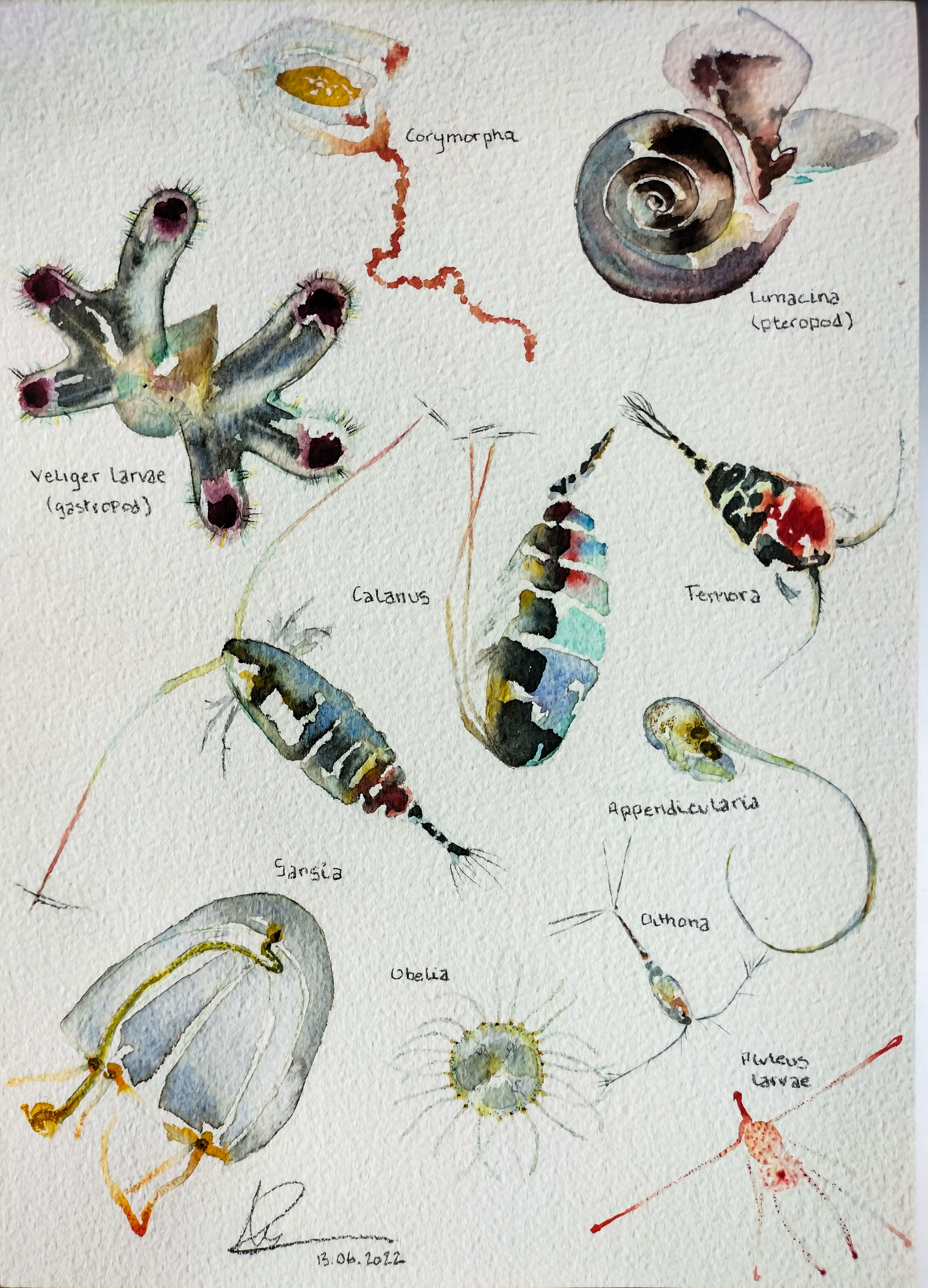 I sometimes still catch myself looking out to sea thinking how vast and empty it seems. Then I laugh to myself, intuition in this case could not be further from reality. Going out on the boats to sample at the mesocosms, I gaze in, only catching a glimpse of the first 3 or 4 meters of green water. There is so much more than meets the naked eye – A whole world of diverse forms, behaviors and life strategies lives in sizes smaller than a few millimeters. With the help of a scope, I stand stunned at the sheer numbers of animals, and how strikingly different they are. These, we call zooplankton.

Kind of crazy, really, that within such small sizes animals have evolved to carry out such a wide array of functions in the ecosystem. Copepods, a somewhat distant cousin of shrimp and crab, are very abundant. They are busily swimming around and filtering the water with their many arms, sorting out microalgae and small animals for a quick snack.

Appendicularia come off as alien-like. Apparently not much more than a head and a tail, they are extremely delicate (some might say emotional), and as soon as they are disturbed, they discard what makes them so interesting: their house. Let me explain. Their house is basically a structure of sticky, jelly-like nets within which these animals live. When they whip their tails, they create currents that run water, and food, through the nets. With this sophisticated feeding system, they manage to catch and eat prey way smaller than themselves, even bacteria!

Another cool animal, which unfortunately graces us with their presence less often than we´d like, are pteropods. After seeing them flap their wings to move around, I get why they are nicknamed sea butterflies. These marine snails have also developed their own special way of catching prey, by making jelly nets that they suspend above themselves to trap food as they float around. Kind of a lazy strategy if you ask me, but an intelligent one if you need to save your energy for other things, like building a shell.

And last but not least, I cannot not mention jellyfish! In the last weeks we have caught at least 6 different types, some flat as a disk, others shaped like a vase. Some have only one tentacle, others have four, and others have more than I can count. They can also be quiet colorful, orange or reddish, sometimes with a full belly of black or green food – copepods, microalgae, a mix? We will have to find out.

These are just a few of the animals that inhabit our mesocosms, and whose response to ocean alkalinity enhancement we are investigating. Could the increase in pH, and in availability of building materials, help pteropods calcify better? Or maybe OAE affects zooplankton indirectly, via changes in the amount and composition of their food? After all, ocean alkalinization cause changes in the availability of carbon, which is a nutrient for the photosynthetic microalgae that fuel the food web. Let´s even go one step further (but closer to us), and ask ourselves how fisheries could be impacted by changes in the zooplankton, as these are the food that sustain them.

Big exciting questions that have kept us busy for the last month, and that will keep us in the lab for the coming one!