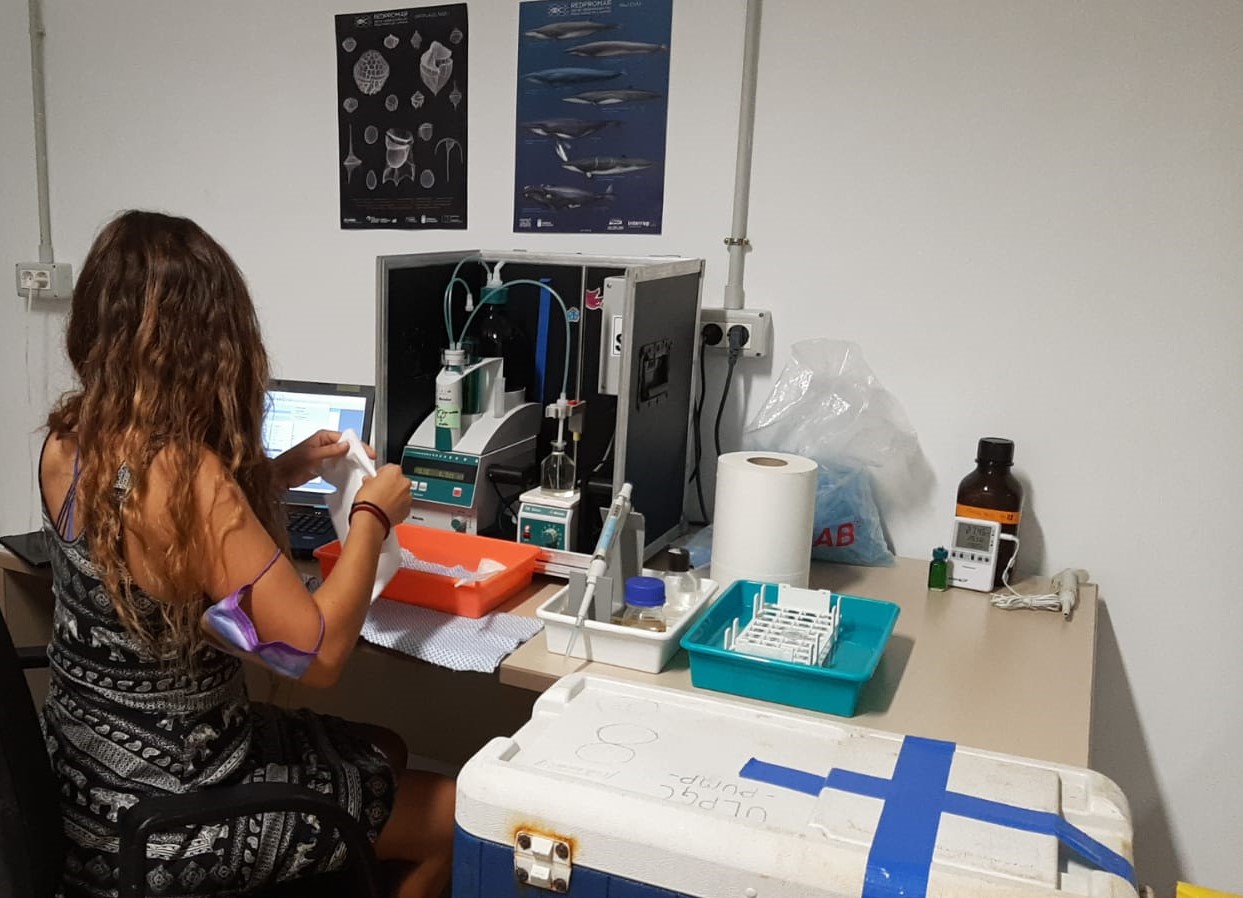 Making oxygen (O2) magic just looks cool, but it is also fascinating and highly relevant. This analysis looks into the amount of oxygen that exists in a water sample. As we all know, oxygen is essential for most living organisms. All of them breath it in, and some of them actually release it back and produce further O2 through a process called photosynthesis. These are called autotrophs or primary producers. In the ocean, one of the key groups contributing about 50% of the global primary production is composed by single celled organisms called phytoplankton, which are part of the microbial community together with heterotrophic bacteria. Since all of them breath, the idea is to look at the metabolic balance between the respiration and the primary production rates to see how the whole ecosystem behaves (producing vs consuming oxygen).

What we are trying to figure out is therefore whether alkalinity enhancement, at different levels, impacts this metabolic balance. How can this be achieved? Well, through incubations in the dark and in the daylight. Out of a sample taken directly from a mesocosm, small bottles are filled without headspace to avoid any O2 exchange with the atmosphere. Four of them are fixed in that moment (“initials”) so that the amount of dissolved O2 present then can be measured. Four of them are put in opaque bags, and inside a black box (“dark ones”), and four of them in a transparent incubator (“light ones”) covered with a blue filter that mimics the ocean surface (see picture above). All of these are then set in a fountain that has a constant flow of seawater and thus, presents somewhat stable conditions (which are also monitored).

After a whole day incubating, the dark and light ones are fixed, and all the 108 samples are analysed (fun!!). Then, and in the meantime, it is just magic potion making, bottle after bottle (see video below). The beautiful cloud forming inside the bottle is actually tri-iodide ion and the amount that’s created due to the addition of sulfuric acid is proportional to the amount of O2 in that sample. What does the Dissolved Oxygen Analyser (DOA) do to quantify the O2 concentration? It determines an endpoint, based on the amount of UV light adsorbed by the tri-iodide ion, at which the ion will run out. Then, it adds a reagent, called sodium thiosulfate, that reacts with the tri-iodide ion. Based on the volume of the bottle and the volume of thiosulfate added before all the ions disappear (the sample is back to being transparent), the DOA calculates the O2 concentration.

Once you know the O2 concentration in all the bottles, you can calculate whether the community is producing enough to balance out for the O2 that is consumed through respiration. If, for instance, the bottles that were incubated in the light have less O2 than the initials, then you know that the community is producing less oxygen than it is consuming, so there is no net primary production.