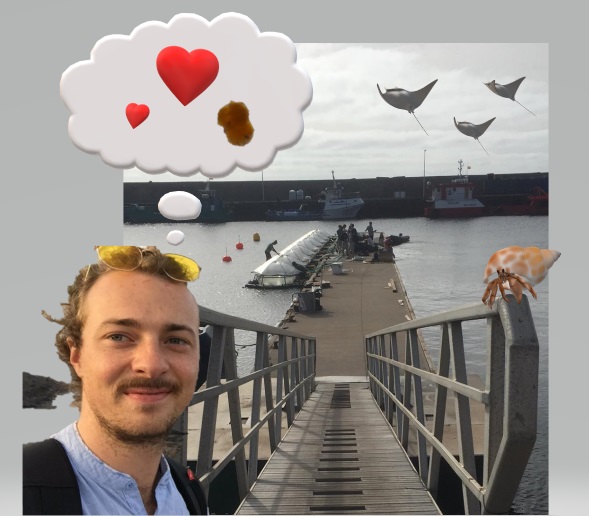 I study MSc. Biological Oceanography approaching my 3rd semester and I‘m very happy to take part in this year’s OCEAN-NETs mesocosm-experiment on the island of Gran Canaria. Since Covid-19 made a cut to most encounters with physically present scientists, I am only now reflecting upon the impressions I get from working together with real flesh-and-blood-researchers rather than pixel accumulates. Part of my observation results in the following: A scientist‘s daily grind is ruled by non-reliable time schedules, frequently asking questions and rarely attaining uncompromising answers, doing sports and drinking beer after (un)finished work. In that sense, one could call science an exciting but somehow unfulfilling profession – a one sided, never ending game of catch. But on a closer look, working based on assumptions reflects a key feature of human nature: A child learns how to speak by trying to imitate their parents – until it can communicate like them and become a referable addition to society; Society is a term for complex interplay of individuals, resulting in an entity much bigger than the sum of its parts – held together by rules based on a moral codex; The concept of morality is founded on philosophical assumptions that have their roots in the basic principles of ancient cultures – existing due to random socioecological and evolutionary events in history… one could continue that list forever. At last, „Fake it ‘til you make it“ might be much more than a casual idiom. However, the chance of contemplating the above mentioned was given to me mainly by being involved in the group that handles mesozooplankton within the mesocosm study. I didn‘t know too much about what my exact tasks there would be. I knew, however, that the main idea of the project is fighting human induced climate change through enhancing natural ocean alkalization, and that I felt morally obliged to support as part of a society which is part of the problem. That was what got me involved apart from traveling to Gran Canaria. So I was ready, willing and kind of able as I got assigned to the „Team Calicifiers“ with the task to support Isabella in data collection and interpretation for her thesis. Since enhancing a (naturally occurring) chemical process in seawater also means changing the environmental conditions for its inhabitants, it is important to investigate what might be the possible effects on them, or in our case, the effects caused by them. Calcifiers are small organisms that produce calcium-carbonate shells and release CO2 in the process. This counteracts the alkalization effect, in which CO2 gets sequestered from the atmosphere into the sea. Alkalization also induces a shift to more bicarbonate in the water, which calcifiers in turn use for building their shells. The main research question is thus, to which extent calcification processes are favoured by alkalization and how much they can reduce the CO2-binding capacity of seawater.

One important calcifying group we are looking at are foraminifers – very small, unicellular protozoa with a four-chambered shell that consume even smaller organisms. „Looking at“, that is, we keep scanning seawater probes through a scope over and over to find even the smallest foraminifer. I never considered myself a precise person and if anything, I am famous for having shaky hands. So, learning how to handle those small protists under the scope didn‘t prove that easy at first. I kept confusing other organisms with foraminifers and often times lost them again once found. But I got better with time, until now I reached a point where I believe I can pretty accurately distinguish a foraminifer from any other organism or piece of dirt that might float through the water sample. Sometimes, I keep searching forever, just to find things that look slightly like foraminifers and I sit there for a very long time contemplating on whether I found one or not. But when seeing an actual foraminifer, I almost always know it‘s one by heart. I get that sensation of confidence that you suddenly have, kind of like when you meet someone and instantly know you‘re in love with them. It’s mostly intuition and therefore also a form of assumption, but with a fairly good feeling to it.

And this is where it all comes together: My personal fight against climate change lies in finding these very small organisms based on assumptions I am making about their appearance. But I am quite confident that my contribution to the project is meaningful because I know: Behind any great achievement lies an ambitious scheme. Behind every scientific aspiration glows the spark that´s inherent to human nature.