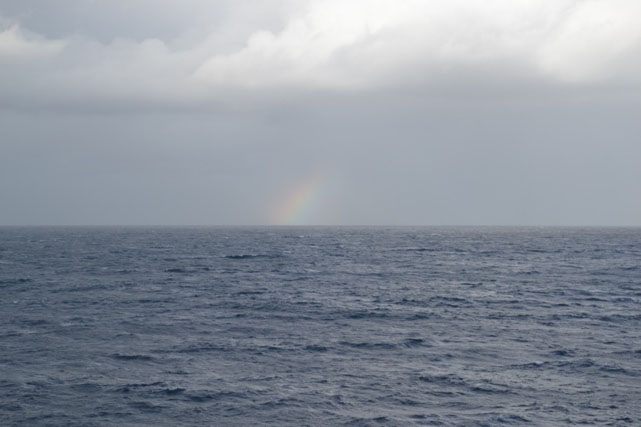 A rainbow on the vast Atlantic Ocean after sailing out of Las Palmas de Gran Canaria. Photo: A. Beniest/ UMPC

Bottlenecks – part II (read part I here)
In our final blog we will re-capture our journey through the Mediterranean as it is not very often that one gets to travel from one end almost to the other. The Mediterranean is unique because of its numerous passages and straits. These maritime bottlenecks also characterized our journey, but luckily proved to be the only bottlenecks we had to break! So come along with us and take our tour again through Mare Nostrum, our sea, and learn about its rich cultural and geological inheritance while we are heading towards the port of Heraklion on our last transit, enjoying every glimpse of the sea that we get while packing our equipment, cleaning the labs and getting hooked on the data that we collected over the last weeks – just like scientists do!
See you all back home in a little while,

In the steps of ancient traders
The Maria S Merian, bound for Heraklion, on the isle of Crete, needs three weeks to get there, including the deployment and recovery of some 50 OBS (Ocean Bottom Seismometers) and OBH (Ocean Bottom Hydrophone) systems. Like there are many ways that lead to Rome, there are many sea routes that lead from Gran Canaria to Crete. From the broad Atlantic waters (photo 1) to the narrow passages in the Mediterranean Sea (photo 2- 5), on this journey, we encounter all. Most of the small straits we sail through have been explored and used to the advantage of lost cultivations. How did ancient seafarers use the straits? Who were the people that did all the exploration for us so we can now safely use these passages to cross the Mediterranean from west to east?

Strait of Gibraltar
The Canary Islands are located in the middle of the Atlantic Ocean. Before the Maria S Merian reaches the western gateway of the Mediterranean Sea, the Strait of Gibraltar, the Atlantic Ocean has to be crossed. At its narrowest point, the strait measures only 14.3 km. This very short distance has been used by several cultivations through history. According to Wikipedia, Carthagians, Romans, Moors and Berbers all used the strait, mainly used for campaigning and travelling. It has not always been a cross-way though. By the end of the 15th century the Strait of Gibraltar functioned as a barrier, when the last Muslim governors were driven out by the Spanish. Ever since this event, both sides of the strait developed distinct cultures, languages and religions. Sunrise over the Strait of Gibraltar as seen from
the Monkey Island of the Maria S Merian.
Photo: A. Beniest/UMPC

Strait of Bonifacio
After the recovery of the broadband stations that were deployed in the Ligurian Sea 8 months ago and the OBSs along the profiles, the Maria S Merian is headed for Heraklion. The Strait of Bonifacio is the second seaway we will sail through with the island of Sardinia the southern shores and Corsica to the north. Long before us, the Romans used this strait to ship western European goods, e.g. Spanish wines and olive oils to Italy. The route is known though as treacherous due to heavy currents, rocky parts and winds. One of the most famous shipwrecks in the area is the one of the Sélimante, a French ship that left Toulon with over 650 people on board and a load of gunpowder for the Crimea war. In February 1855 it was surprised by a heavy storm and the ship exploded on the islands along the southern shores of Corsica, leaving no survivors. In the 90’s a tanker disaster occurred in the strait and ever since ships with dangerous goods are highly discouraged to take this seaway. Passage through the Strait of Bonifacio. La Maddalena Archipelago (Italy) is on the left, L’île Ratino (France) is to the right Photo: A. Beniest/UMPC

Strait of Messina
The narrowest waterway on this journey is the Strait of Messina between the island of Sicily and mainland Italy. The passage measures only 3.1 km at its narrowest point. The currents in the strait are rough and alternate between south to north and north to south every 6-8 hours, thereby dropping the water level with 15-20 cm. The rocky coast and the heavy currents made it a seaway feared by sailors in the antiquity. The two settlements on Sicily (Melae in the north, Messene in the east) were founded as early as 750 BC to protect the passageway for unwelcome visitors. The cities were also used by merchants sailing goods, who were in need of a safe harbour when the strait could not be sailed in bad weather conditions. Tight throughway at the Strait of Messina Photo: A. Beniest/UMPC

Strait of Kythira – Antikythera
To reach the final harbour of this scientific mission, the Maria S Merian will sail through the Strait of Kythira-Antikythera, which connects the Mediterranean Sea with the Aegean Sea. Compared to the other straits, the Strait of Kythira – Antikythera is rather wide with a width of roughly 100 km. But don’t take this as an easy crossable strait as many ships sank as a result of strong winds. Like the Strait of Messina, this passage was considered dangerous by the Greeks themselves, as many ships wrecked on the southern coast of the Peloponnese peninsula. Still, traders from northern Greece, Istanbul and the Black Sea harbours used it to get their goods to the occidental civilisations.