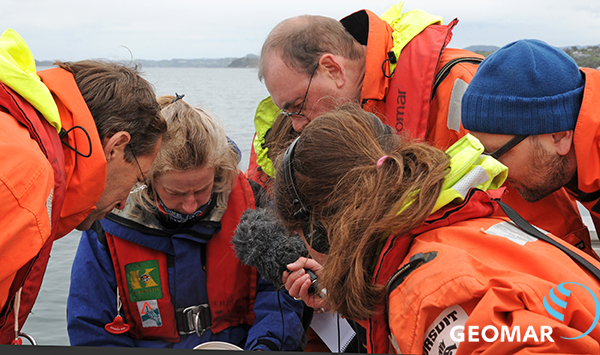 In KOSMOS science meetings, information about the different levels of the food web are normally presented in succession from the smallest to the largest individuals. Last time, after we had talked about the pico-eucaryotes, phytoplankton, zooplankton, apendicularians and fish larvae, I was asked about the journalists. And I like thinking of them as top predators of our work. At least so far.

And so they came: Malte Henk from the German weekly paper “Die Zeit” payed his visit already last week because his article is due on June 4. This week, Christine Westerhaus from “Deutschlandfunk”, Barbara Lich from the childen’s magazine “GEOlino”, Michael Billig who works for “Bild der Wissenschaft” and “Natur” as well as Rüdiger Braun, freelance journalist for WDR radio and “Stern” joined the scientists – a sympathetic little group of very interested and well-prepared reporters. Where are we? What are we doing at the moment? And why? Ulf talks about the experiment while we head out for the mesocosms. Photo: Maike Nicolai, GEOMAR

Christine and Rüdiger made us aware of the sounds of science. The squeaking of the flow cytometer’s wheel, the happy buzz of our working boat Wassermann’s engine and the splash of a water sampler made them especially happy. Too bad the tiny organisms that are investigated in this study do not make any sounds.

But at least they are cute! Ask Barbara who enjoyed hours watching sea butterflies and all the other astonishingly-formed plankton species with Silke, Dana, Pete and Carsten, absorbing expert knowledge and true enthusiasm. We all kind of like the snails that have decided to fly through the ocean. But Silke and Dana adore them – and are more than able to tell you why.

Michael went out sampling with Kai and got a first-hand impression of mesocosm work in Bergen weather. And after he had dried himself and his camera, he was the last in a row of interviewers who popped into Kai’s office to find out more about the fate of Emiliania huxleyi in the future ocean.

It’s great that media interest is that large – and it’s great to have a team of scientists that can deal with it. Now let’s see what the top predators leave over…