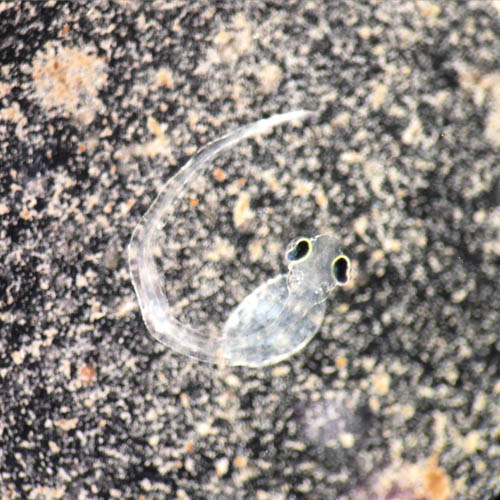 Newly hatched larvae; Photo by Henrike Wunderow
Looking in the egg-incubators since the day we put them into the mesocosms, you could see pairs of eyes staring back at you. Then suddenly it got less and less, fortunately not unexpected, since they were hatching just as calculated by the temperature they experienced over time.
Signs for first hatching could already be seen on Tuesday but to be sure we were waiting till Sunday to give also the last the chance to hatch, releasing as many fish as possible into the mesocosms.
The first signs to notice why they must be hatching was quite sad, some were dying and sinking to the sediment trap; but thats nothing unnatural, in the ocean only 2 larvae of one female need to survive till maturity to have a stable population and fortunately the fish dames have thousands of eggs. Herring eggs in the incubators; Photo by Michael Sswat

So from counting the amount of eggs in each mesocosm before and after hatching, you can easily calculate how many hatched and it seems like a lot: between 1500 and 2500 herring larvae decided to live in the mesocosms and some of them even under probable future ocean conditions.
Like we said some dead we found in the sediment trap, but we do not only need the dead larvae, we also want the living ones to compare them between the two treatments and the mesocosms.
So why do we need to sample them anyway? The problem is nobody really knows yet how fish larvae are doing in the future. Looking at the first net tows; Photo by Maike Nicolai

One way would be guessing but we prefer more solid researching. The hypothesis is that the CO2-changed food indirectly affects the fish larvae in their growth and condition; together with the already better studied direct effect of CO2 on fish larvae.
In the mesocosm experiment in Sweden 2013 we had fish larvae under future ocean direct and indirect CO2 conditions but could unfortunately only compare the survivors in the end. Here in Bergen we want to get a better understanding of how they are doing in between and if there is for example critical periods of development or food limitations.
Until now these systems are the only ones giving this big amount of parameters which is needed to explain the possible interactions.
So we now focus on trying to catch them in the mesocosms while they are developing, which is not as easy thinking of approximately 1 larvae per 30 liters…
But we did not come unprepared, for this task we will use a variety of instruments:
A plankton net which is pulled from the bottom till the top and has a relatively large mesh; just the size for fish larvae to be caught. In addition we will also try light traps, because herring larvae, same like moth, are attracted by the light at least when they are young (or maybe they are only afraid of the dark; personal comment of the author).
To check wether they are swimming around at all, we used a small camera with lamps at night making it look like „Starship Enterprise“. Apart from a lot of small crustaceans, jellyfish and algae cells, we also saw small herring swimming around. If happily we cannot say, but at least agile or clever enough to avoid our plankton net the day after.
So the next step is to see if they are still afraid of the dark and swimming into our traps or if they are come off-age already.