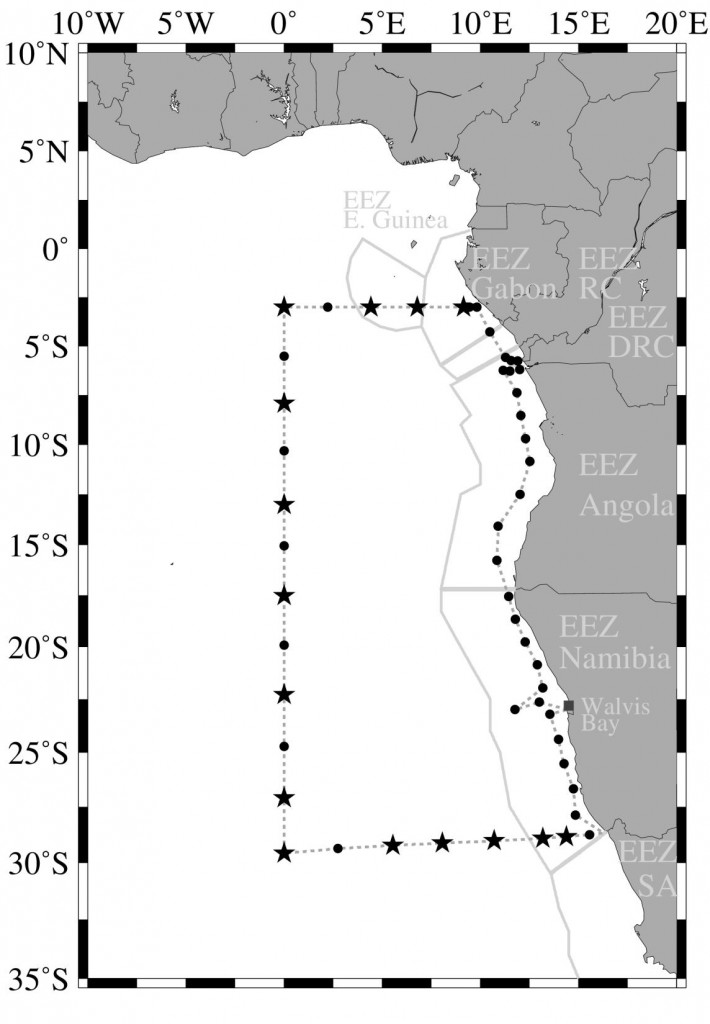 Cruise map for M121. To be sailed in anti-clockwise direction

I am the oxygen lady on board the METEOR M121 GEOTRACES cruise. At least, I got that title after just a few days onboard. Why did I get this title? Of course, because I am measuring oxygen. To be precise, I am measuring the concentration of dissolved oxygen at specific depths at each sampling station.

I am using the so-called Winkler method for these measurements. A nice and colorful, chemical titration method that has been used since 1888. Those of you that are interested in marine science and have seen underwater robotics and the satellite steered glider will maybe ask themselves, are there not more advanced, automated, fancy ways to do these measurements? Yes, there are. As Ed has already mentioned in a previous blog, CTD devices (conductivity-temperature-density) collect most of our water samples. Each of these devices is set up with a collection of highly sensitive sensors to measure chlorophyll and oxygen as well as the parameters named above. However, these sensors have to be calibrated at the beginning and have to be corrected once in a while to minimize detection errors. Especially for the new, uncalibrated trace metal free CTD these measurements are quite important.

The principal chemical reaction behind this method is the oxidation of iodide to iodine. By adding some chemicals, the oxygen in the seawater first precipitates, then it is dissolved again, combined with zinc iodide starch and finally measured with a titration solution. During this process, the seawater turns from yellow to brownish, purple and finally to clear and colorless. With the volume of the titration solution used and a simple calculation, you know the actual dissolved oxygen concentration of your seawater. But why is oxygen an important parameter for marine scientists? You all know and experience in every second of your life that oxygen has a crucial importance for life on earth. Oxygen keeps us alive, it surrounds us wherever we go and with 21%, it is the second most abundant gas that forms our planet’s atmosphere. The largest reservoir, nevertheless, is hidden in the earth crust and mantle in form of minerals.

Oxygen is involved in a cascade of chemical reactions that beneath others lead to energy production in our cells. Oxygen is needed to light a fire. It breaks down rocks and even metals; just think about a rusty car. The fundamental mechanism behind this processes are redox reactions again. Oxygen is a very reactive element and a perfect electron acceptor. You will barely find single oxygen species on the planet, because they tend to react with other chemical species to be energetically balanced. Oxygen reacts with trace metals in seawater, the ones we are investigating, as well.  In fact, the trace metal species found in the water column for example Fe (II) or Fe (III) also depend on the oxygen concentration of the water.

Oxygen looks back on a two billion year old success story that even started in the ocean, where microscopic scaled cyanobacteria and marine plant species, phytoplankton, transfer light energy, carbon dioxide and water molecules in oxygen and carbon hydrates. The photosynthesis they do is also based on a redox reaction. Because oxygen is so important, scientists created the oxygen cycle to visualize the different reservoirs in which oxygen can be found.

One thought on “Post from the oxygen lady (by Angela Stippkugel)”