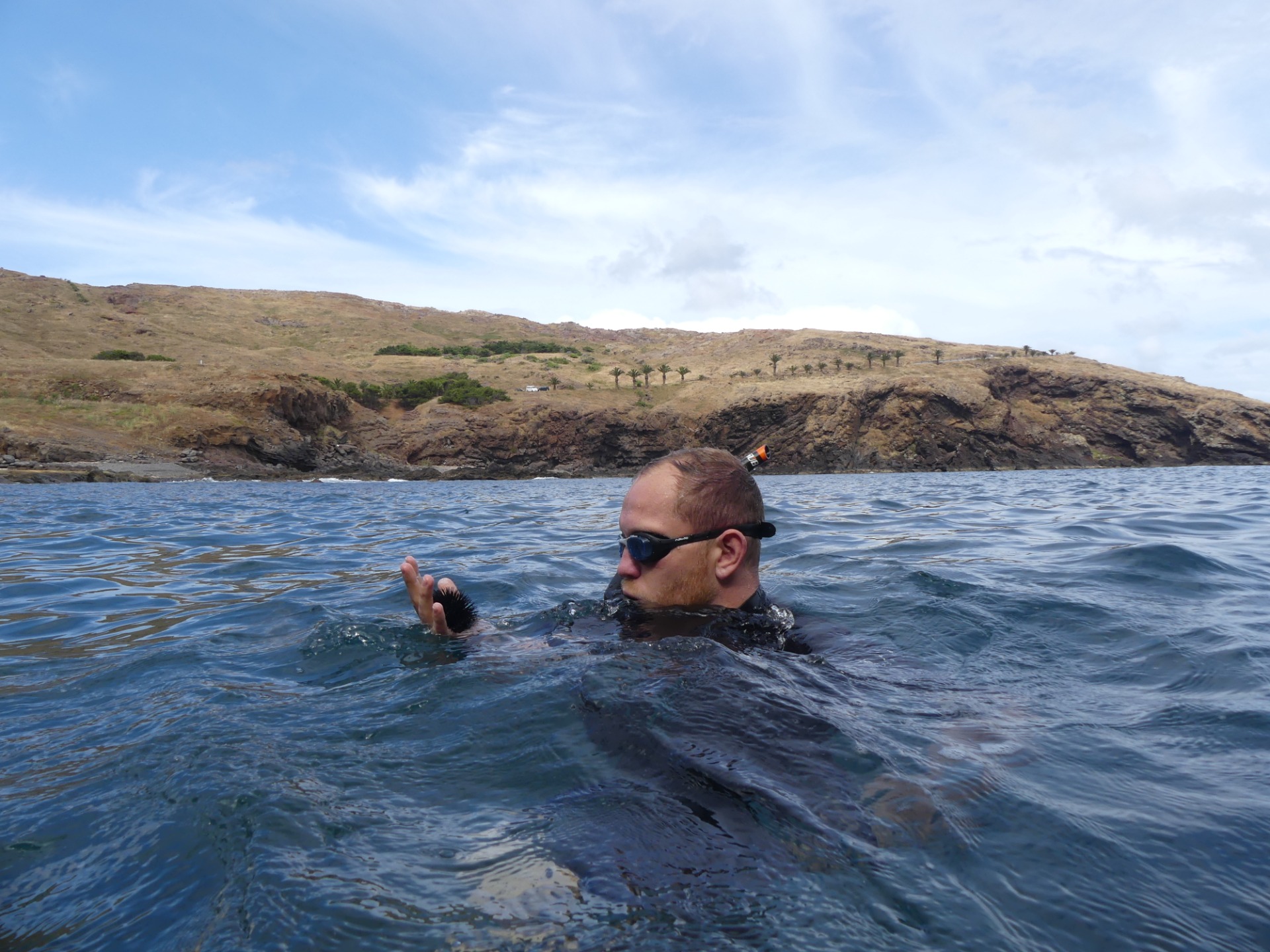 Hello, greetings from Portugal. We are Bruna and Marian, a Portuguese-German joint venture. We are based on Madeira Island in the Macaronesia region, which comprises a group of four volcanic archipelagos in the North-Atlantic Ocean (Acores, Canary Islands, Cabo Verde and Madeira). Due to its location about almost 1000 kilometers south-west of Lisbon, the climate of Madeira is subtropical and very balanced due to the strong maritime influence of the Atlantic. The annual temperature range is narrow: Air temperature reaches 26°C in summer and does not drop below 19° during winter – at least at sea level –, while the sea surface temperature ranges from 17°C in March to 23 °C in September. Because of the mild and balanced climate, most of the houses here do not have a heating system. However, as Madeira is of volcanic origin and therefore mountainous (highest peak 1862 m) the island comprises several climate zones. Its coastline is rugged and, at many sites, drops very steeply into the sea, what creates beautiful and dramatic sceneries.

Our journey within the GAME 2021 project started with an online course in March. At this time, due to the pandemic, we even did not know if Marian will be able to make it to the island and could help Bruna with conducting the experiments. In March, we were trained in experimental design and statistics and the initial plan was to start with the experiments right after the course by the beginning of April. However, after we had finished the preparation course, we had to wait for almost two months until we finally could meet each other on Madeira on the 20th of May. From that day on, we were finally able to implement what we designed, planned, and learned in March. Marian arrived on the island with a smile in his face (behind the mask) and a lot of luggage. A LOT!

After organizing all the luggage, changing long pants for bathing shorts, finding an accommodation and even buying a car, we were ready to go.

Our lab is located on the eastern end of the island, in a beautiful place that is called Quinta do Lorde

The car ride from the island’s capital Funchal, where both of us live during the time of the project, to Quinta do Lorde takes around 45 minutes, but is rewarded with amazing views on the ocean. Fortunately, the modern highway (Via Rapida 1) perfectly connects both locations by passing through several valleys that are linked by tunnels. Without these tunnels, the car ride would take us much, much longer due to the mountainous nature of the island. The motorway even passes under the artificially extended runway of Cristiano Ronaldo International Airport, Madeira.

The laboratory in Quinta do Lorde has a MOSS system (marine organisms stress simulator), which is a facility that allows researchers to simulate ocean warming or, like in the case of our project, different light regimes. Both our supervisors – João Canning-Clode and Patrício Ramalhosa – were GAME students themselves and they designed and built the lab specifically for these kinds of marine experiments.

Since we are studying the effects of Artificial Lighting at Night (ALAN), its isolated location makes the lab in Quinta do Lorde the perfect place for our experiments. This is because we need to collect our test animals from a pristine environment that does not experience artificial light during night hours and this is perfectly possible even in close vicinity to our facilities. It will make sure that our test individuals are not already used to artificial light and that they will be exposed to this anthropogenic influence in the laboratory for the first time.

First, we collected individuals of the species Arbacia lixula and Paracentrotus lividus. However, we soon realized that we could not provide adequate living conditions for Arbacia in the laboratory, since the individuals were too big in size for the tanks that we planned to use for the experiment. We therefore decided to focus on Paracentrotus only, what gives us the chance to enhance our test power by increasing the number of replicates for the experiment. Paracentrotus lividus is one of the most abundant benthic grazer species around Madeira and it is easy to collect if you have a fork and keep an eye on the tide calendar. Sea urchins of this species prefer to sit and hide in tide pools in the rocky intertidal, which get flooded with every hide tide and then receive fresh seawater and nutrients for algal growth. They even use their mouth, which is equipped with robust teeth (called Aristotle’s Lantern), to pull themselves deeper into small stone caves. This makes them hard and time consuming to collect – good fork skills required!

For our experimental set-up in the laboratory, we use shelves, of which each one carries experimental units that belong to one of three light treatments: no exposure to ALAN (normal light/dark rhythm), short exposure to ALAN (artificial light for 2 h before sunrise and for 2h after sunset) and long exposure to ALAN (artificial light from sunset to sunrise). To prevent mutual interferences between the treatment levels, we covered everything with black plastic. Furthermore, in order to maintain a good water quality inside the experimental units, we have a flow-through system that supplies a big tank with fresh seawater from the ocean outside the lab. From the tank, the water is then directed to the single containers inside the laboratory. To ensure that the temperature of the incoming water is the same each day and for each experimental unit, we have a cooler/heater device that allows us to adjust the water temperature.

Besides the intensive work in the lab, we manage to go surfing, mountain biking or, most of the time, hiking along the beautiful levadas. Levadas are artificial irrigation channels, built to transport rainwater from Madeira’s humid north coast to the dry south coast. Most of the channels can be followed by hiking alongside and, therefore, it is possible to enjoy the islands beauty in an amazing but physically demanding way. Hiking along levadas means long distance walks with loads of hills!

We are grateful for this experience and thankful for the support from everyone who works in the lab and is always willing to help even if it’s just giving some expert advice. We also plan to keep working hard and enjoying the island and the nice weather. Specially, because it won’t be long until we will need to trade the sunny days for the cold weather in Kiel. The analysis course for our project will start at GEOMAR in October.