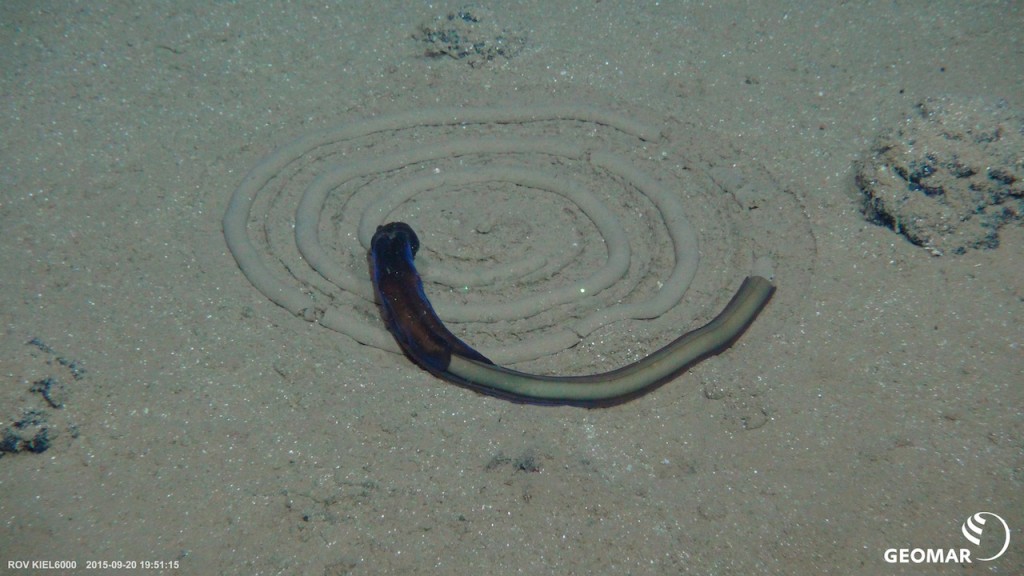 During this 4-week expedition we have been very busy with studying traces of human activity at depth on scales of centimeters to kilometers. There was so much to be learned from this study site at 4150 m water depth. But it is important to remember that the ploughing of the deep-sea floor here is a tiny, local scientific experiment compared to the spatial scales of any commercially relevant deep-sea mining. Still, the “DISCOL” experiment is the only one of its kind, with many scientists from various nations are interested in the findings of the SO242 cruises to gain knowledge on the consequences of deep-sea disturbances, as well as for gauging the chances of deep-sea fauna recolonizing the disturbed areas.

By now we have thousands of high-resolution photographs collected with our ocean floor observation system, called OFOS (see the ‘Tracking the Impact on Deep Sea Life’ blog post). Besides the human traces of ploughing and a bit of littering, there are a lot of other traces of the deep-sea fauna itself, which are worthwhile investigating. In fact, it is also a lot of fun guessing which animal is producing which traces. The animals living on the seafloor are called “benthos”, that is greek for “depth”; meaning animals that live at the bottom of the sea. Such animals use the seafloor mud for various purposes: they rest on it, they walk or crawl across it, they lick the surface sediments or eat the whole mud, they hide in the seafloor by making deep burrows or by piling up sediments into mounds. Some of the mud-dwellers produce very prominent traces by their poop (the polite scientific word is “feces”, or “fecal matter”), which mostly consists of deep-sea mud. Large feces are produced by holothurians (Fig 1 & 2), and we know that for sure as some holothurians are so transparent that you can see through their body how the mud feces are being formed. There are many different worms in the deep-sea which make fascinating traces, such as enteropneusts (Fig 3), famous for their perfect spiral feces, and echiuroids, (spoon worms) with their meter-long tongues licking the seafloor (Fig 4). Fig 4. The proboscis of an undetermined echiuroid (or spoon) worm. This long extendable scoop skims more than 1 m from the burrow in which the worm lives, collecting sediment and returning it to its mouth for consumption. IMAGE: OFOS AWI

The technical term for all these signs of benthic activity, including borrows, trails, mounds, and poop/feces is “Lebensspuren”, which is originally a German word, but also used in English. It is a very beautiful word, for what is basically mud dwelling and animal traces of any kind.

In the following we show some images of such traces. Try guessing which animals make them, and then click here for the solution.. With best greetings from the SONNE, especially for Siska, Karl, Vincent, Leto, Loki and Tesla.