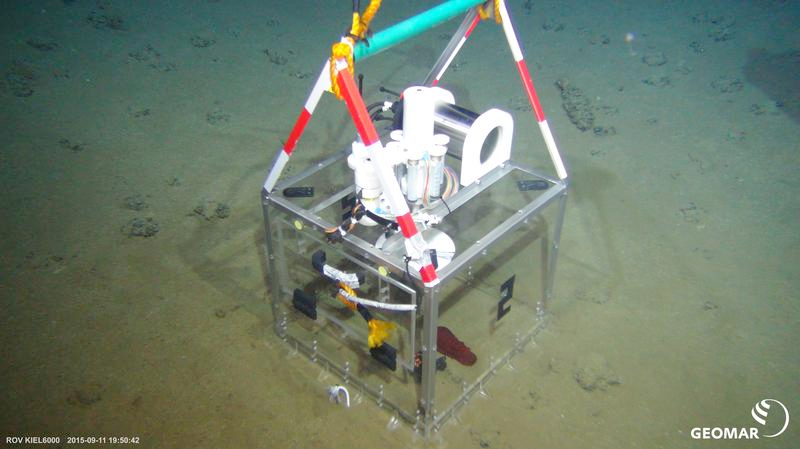 A mini-house (now you understand why we call them CUBEs) at the seafloor with a red sea cucumber inside. The sediment under these mini-houses contain all the important organisms of the food web that we are studying (photo: ROV Kiel 6000; GEOMAR).

It may not always be easy to see, but the deep seafloor is teeming with life! Microbes and worms live inside the sediment and large sea cucumbers crawl over the sediment. This is one of the large holothurian we see at the seafloor. (Photo: ROV Kiel 6000)

This life will probably be heavily disturbed if the industry gets permission to collect manganese nodules and remove or plough through the top layer of the sediment. Our goal on the research cruise is to find out if life in the sediment can recover after a major disruption of the sediment. How do we study this? Well, we look at a very elementary aspect of life: feeding interactions (Fig. 1). Organisms in the deep sea feed mostly on dead algae that have ‘rained’ down slowly from the surface of the ocean. At a water depth of 4,000m however, this ‘rain’ is actually just a very fine drizzle: a square meter of seafloor in the deep sea receives less than a sugar cube per year! You can imagine that all these organisms are heavily competing to get access to the scarce food. Fig. 1. Who eats whom? This cartoon shows the web of interactions between organisms living in and on the seafloor. In our experiments we are studying exactly these interactions after injection of our spe-cially grown algae. (Dick van Oeveeln)

In our experiments, we make use of this competition for food and measure how much the different organisms are feeding from dead algae. That is why we have developed ‘mini-houses’, we call them CUBEs, that can be placed on the seafloor. Within each CUBE we encage all the interactions as shown in the cartoon. After the CUBEs have been placed, an injector releases a large amount of dead algae (Fig.2 and Fig.3) into the CUBE that settle on the seafloor and the ‘feast’ begins. All organisms will likely try to eat as much as possible from the dead algae in the next couple of days. At the end of the experiment we take samples from the sediment and the organisms up to the ship, because the algae that we used are quite special: they leave a trace in the tissue of the organism.

Fig.2 Tanja spent 0.5 a year to culture many more of these flasks to get enough ‘special algae’ for our exper-iments in the mini-houses. Fig 3 A test of the algae injector. (Photo: Kristin Hamann)

So by analyzing their tissue in the laboratory we can determine who eat from the algae and how much is eaten. We setup the mini-houses on parts of the seafloor that are still pristine and untouched and on parts that have been heavily disturbed previously during a large-scale experiment 26 years ago. By comparing the feeding activity (i.e. appetite) of the organisms on the seafloor between these two locations we can determine whether the food web has recovered or not. This is important information to have before to inform decision makers that have to decide whether mining in the deep sea can be allowed.