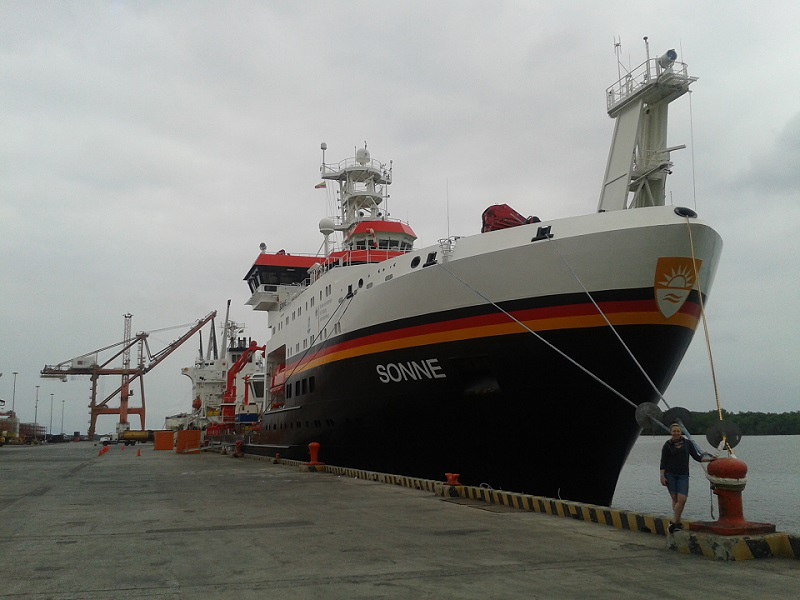 Me in front of the “SONNE” in the harbour of Guayaquil

With the second expedition the scientific crew on board changed, because the scientific focus is different to the first leg. This brought me on board of the “SONNE”. Here I will work as a lab assistant and I will try my best to report about the expedition in my free time.

Right in the middle of lunchtime we reached the first station of the cruise SO242-2. Everybody is off their feet to rush downstairs. Nobody wants to miss the first deployment of the first gears (CTD and the maper) as we have waited 46 hours to get back to the DISCOL area. The posts of the previous cruise SO 242-1 have already explained why we are in the Peru Basin outside of Ecuador’s Exclusive Economic Zone and what the project is about, but let it me sum it up for you again. The main purpose of the SO242 expedition is to assess potential impacts of the mining of manganese nodules on the deep-sea ecosystem. We can tackle this question because we are revisiting an in situ experiment carried out in 1989 (project DISCOL) where about a square kilometer of deep-sea floor was disturbed by ploughing.
The current project is called JPIJPIOceansOceans Pilot Action “Ecological Aspects of Deep Sea Mining” and we are on the brand new German research vessel “SONNE” with a whole lot of deep sea technology to study the impact of seafloor disturbance on deep-sea life and their functions.

The previous posts on this blog explained already why the disturbance experiments were conducted at the seafloor in 1989 (http://www.oceanblogs.org/eadsm/2015/08/06/the-veterans-tales/), including one of Gerd Schriever who lead the original DISCOL project. The cruise leg before us has provided us with excellent maps of the plough tracks which are still visible after 26 years.

In 1989, the ship had only twice a day connections to a satellite to determine its position. Now, we know with an error of less than 1 meter where the plough was moved on the seafloor. On the basis of these new maps of old tracks, the scientists lead by chief scientist Antje Boetius can now conduct precise and detailed measurements and experiments at the seafloor in a depth of 4200 meter. They can compare communities of benthic communities of different size classes (which are mainly mega-, meio-, and micofauna) in heavily disturbed, less disturbed and in reference areas (which have not been disturbed by the plough harrow), and also with the original fauna composition recorded in 1989. We will also use various in situ tools and high resolution sampling, for detailed studies of biogeochemical processes. Most of the work will be conducted with the help of the ROV Kiel 6000, which is the deep-sea robot of the GEOMAR. One of the next blogs will report about the ROV studies and experiments. There is also lots of other technical equipment on board, which I will introduce in my next posts of life and science on board.

If you are closely following the developments and scientific research around the topic of mining the deep seafloor you might know that our project contributes to the MIDAS project. Felix Janssen (AWI) wrote a comprehensive contribution about the current research cruise for the MIDAS newsletter. You can find the newsletter here.

If you are further interested in a more scientific summary of the first leg you can read the following paragraph. Matthias Haeckel, our project coordinator, made this summary for the Canadian Broad Casting Radio, which will be aired in September. He also provides some first findings and in the end he gives his opinion about mining and its ecological aspects:

“On this first Leg of the SO242 cruise we acquired detailed maps of the bathymetry and acoustic backscatter of the entire disturbed area. Now we know precisely (error <1 meter) where the plough tracks from 1989 are (back then satellite connection for determining the ship’s position was only possible 1-2 times per day and no information on the position of the gear in 4200 m depth). From these images we are able to differentiate deeper from shallower plough marks and strongly disturbed from less disturbed areas.
This allowed us to select and collect sediment samples with TV-guided equipment inside and next to plough marks as well as sites where the generated sediment plume has settled.
We also shot videos and photos from parts of the seafloor that we can stitch together to a mosaic, which gives us a photo of a larger area of seafloor (e.g. 100 x 100 m2) with a pixel resolution of 1×1 cm2. The photos and videos need to be analysed by the biologists to count and identify the fauna – they have started this work already on the cruise, but it needs to be continued at home as well. This enables us to correlate the discrete sampling of fauna by coring equipment (partly without video control) to larger areas – many animals are sessile, ie. do not move around at the seafloor.

As a first impression, we can state that the plough marks have not changed much since the last investigations more than 19 years ago. This was also to be expected since sedimentation rates and also bottom currents are very slow in the deep sea.
From the sediment cores we can also see that bioturbation, i.e. reworking of the surface sediments in the plough marks by animals is still very low in the disturbed area. One explanation could be the much stiffer/harder sediment that is exposed at the surface due to the ploughing. The normal top 10-15 cm are much softer (almost semi-liquid in consistency) and thus easier for the animals to burrow into. (This is known from areas impacted by seafloor trawling by the fishing industry.)

Our geochemical analyses done onboard indicate that even bacterial activity has decreased (almost ceased) in the disturbed sediments. This preliminary statement is based on the measured change of oxygen content in the top 20 cm of the sediment. This I had not expected – I had thought that the microbes would be able to adapt to the changing conditions within 26 years.
On the next Leg our microbiologists will directly measure bacterial activity and abundances in the sediment using in situ probing deployed by an ROV (a robot that dives down and is operated from the ship via cable and video control). Such work was not possible 20 years ago. We will see if their much more sensitive techniques point in the same direction as my rougher oxygen measurements.

From our 10-m gravity cores we also see that the environmental conditions in this part of the deep sea are much more heterogeneous than previously thought. They actually change quite a bit over less than 1 km distance. This is corroborated by the bathymetry, which is anything else but flat – there are several small seamounts next to the disturbed area and a 350-m ‘giant’ close by as well. This may explain the patchiness of occurrence of manganese nodules in the area, changing on such scales from high densities at the seafloor to sparse distribution to nodule-free seafloor. So, in the end mining may not happen on large continuous areas of e.g. 17 x 17 km2 (this is the area needed to be mined by 1 company per year to be economic), but on smaller patches that are not connected to each other. This would likely be beneficial for the deep-sea ecosystem.”