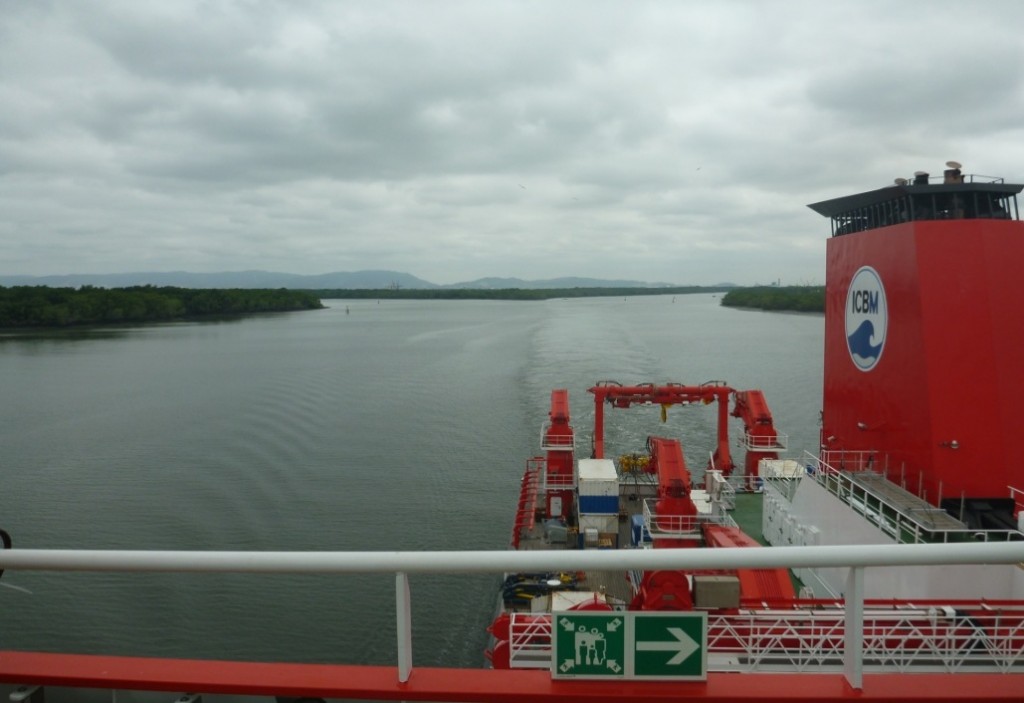 On the way to the river mouth of the Rio Guayas. Photo: Evangelos Alevizos

Extremely excited about my first ever experience on a research vessel. It’s been a few days now since we arrived in the tropical Ecuador. We were lucky to have a day to acclimate before heading off to the ship.
Monday morning we were driven through Guayaquil passing lots of colorful houses and finally reached the harbor, where SONNE was already waiting for us. We feel really lucky to be on the new “Sonne” no less. It’s absolutely huge and we keep getting lost! There are about 40 scientists on board and it’s been a mammoth task to try to remember everyone’s names and what they do! The first thing which went through my mind when arriving at the ship was that you’ll get lost for the first three days. Everything is really big and so is the group of scientists, a professional camera man and technicians, not to forget the crew of the ship. Some people we know already but there are still a large amount of new names to try to remember. Everybody is working on this. It is a definitely international and Interdisciplinary cruise, scientists, with background of biology, geology and geochemistry and so on, who have come together to evaluate the environmental changes by deep sea mining. We had a meeting where all the participants introduced themselves and the work they’re going to do on the cruise. They revealed the individual goals of the different groups. We are already looking forward to get an insight in all the different disciplines and the possibility to learn from each other. It’s a privilege to be a part of such an amazing team and to be around so much expertise. We are especially excited to see the EpiBenthic Sledge, the Gravity Corer, Autonomous Underwater Vehicle in reality, none of which we have seen working before. The ship has a lot to offer and is really modern and comfortable and the meals are delicious so far, they are a combination of western and eastern styles.
After leaving the harbor, yesterday morning we followed the River Guayas for about 5 hours with its wide spread net of arms, passing a lot of rice fields before leaving the mouth of the river to the open ocean. After most of the participants met at the upper deck to watch the start of the sailing  people got back to their business, because soon we will arrive in the working area and everybody wants to be set up until then. Meanwhile, we got the opportunity to see the sea birds such as blue heron, frigate bird, cormorants and pelicans.

Additionally there were some appointments to join in the afternoon, such as meeting the captain, the first science meeting and our first safety drill. So we are pretty busy already and starting off to a hopefully successful and exiting cruise.