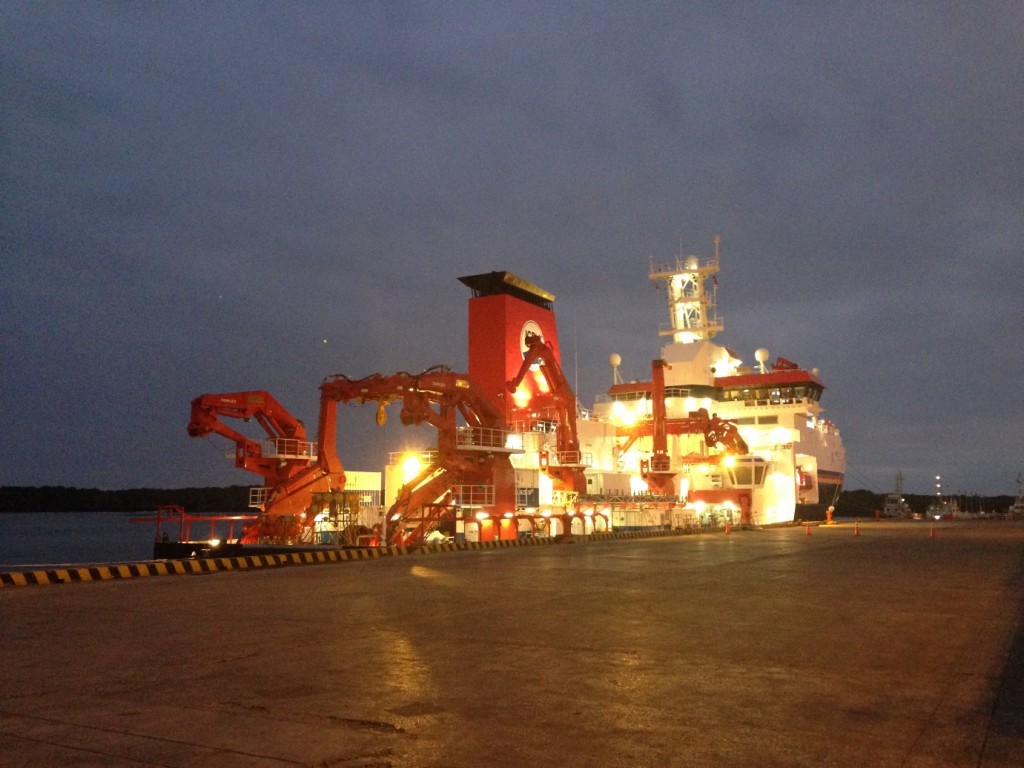 ‘Here we are again‘ was a phrase that I heard several times yesterday when we boarded RV SONNE in Guayaquil (Ecuador) in the morning after being picked up by the agent exactly on time. We are about to start with SONNE 242-1, the first of two legs to the DISCOL area during which we will study the long-term impact of deep sea mining of Mn-nodules. Just three months ago several of us disembarked from SO239 to the Clarion-Clipperton-Zone (CCZ), where we studied the potential ecological impact of deep-sea mining in several license areas. Now we will perform similar studies at 7° south instead of 12° north. The area we are heading to had been disturbed in 1989 and was studied after that during three cruises with the ‘old’ RV SONNE (SO64, 77, 106).

So far all went very well, the equipment arrived in time, people didn’t get lost, setting up our labs and preparing the equipment for deployment started yesterday, 27th July, and now we are waiting to leave the pier. The gangway is already on board and the last things stopping us from sailing are a few ropes. We are a group of 40 scientists and 31 crew that will sail together until 25th August. Two days of transit to the DISCOL area will be used to prepare landers and moorings, get the sediment sampling equipment ready for deployment and setting up geochemical and biological labs for our analyses. The scientific group consists of senior scientists who have been at sea many times, some ‘greenhorns’ who have never been at sea before and one “veteran” who actually planned and carried out the disturbance in 1989. I am sure we will hear something about that from him in a later blog. I will go outside now and watch how we are leaving, it is 10:25 on Tuesday, 28th July 2015, … off we go again.