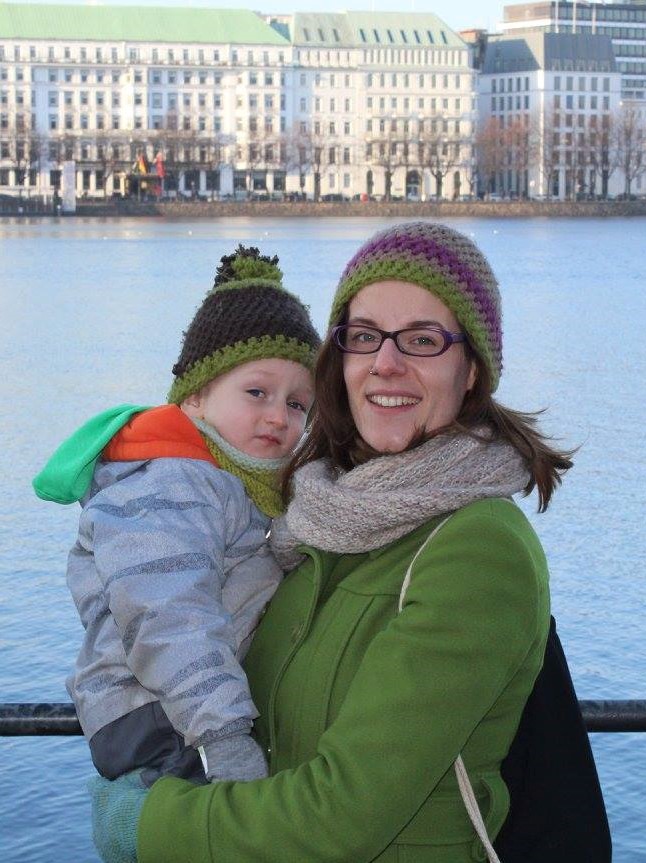 Lisa Neef with her son in Hamburg this winter.

Nature of her work.

Dr. Lisa Neef is a post-doctoral scientist in a research group that specializes in disentangling natural climate variations from the effects anthropogenic global warming at GEOMAR Helmholtz Centre for Ocean Research. Her work, in particular, focuses on climate simulations that are constrained by observed data, that is, simulations where the wind, temperature, and pressure fields are periodically “updated” with measurements (e.g. from satellites or balloons) so that they can simulate historical weather, as well as identify model biases. Practically, that means that she spends most of her days at the computer, writing code to visualize model output and find physical connections in the data.

Dr. Lisa Neef entered into earth sciences as an undergraduate physics student, when she did a summer student fellowship at NASA Goddard Space Flight Centre. This led her into a M.Sc./Ph.D. program in physics at the University of Toronto. After completing her PhD in 2007, she did a 2-year postdoc within a short EU project at the Royal Netherlands Meteorological Institute (KNMI). When that project ended, she started a second post-doc at the Helmholtz Centre Potsdam (Germany) in 2009. After 2 years in this position, their entire research group moved to the Helmholtz Centre Kiel / GEOMAR in 2011. Through various contract extensions and movement of money from different projects, she has stayed in this position to the present day.

Dr. Lisa Neef is married and her husband and she have a 4-year-old son. They’re hoping to grow their family in the coming year. She balances the work and family by trying to (1) split housework equally with her husband, and (2) set clear “rules” for herself and optimizing how she spends her time.  For example, she tracks the actual hours that she works so that she works a bit more on days where she has more free time, and thus feel ok about working less on days where she just can’t find enough time (e.g. when her son is sick to go to daycare).

The above is an idealized picture. In practice, it’s hard to really achieve balance, and she never really feel like she has worked enough or gotten enough done around the house.

+ Digitizing and automating several aspects of everyday adult life, e.g. by purchasing an easy-to-use scanner and storing nearly every piece of paper or information that enters their lives into the cloud, buying regular household items via amazon subscription, etc.

+ Her partner that is aware of the problems with traditional gender roles and happy to participate fully in parenting.

+ The availability of subsidized day care and maternity leave in Germany. She can’t stress this enough. Beyond caring for their son while they work, day care has helped them tremendously with the natural stages of childhood, from potty training to learning to eat with knife and fork. Because they live far from their relatives, they lacked a network of experienced parents when their son was born and felt very much on their own – here the help provided by the day care workers has been indispensable.

+ A boss who has 3 children of her own and is extremely understanding when childcare/family issues intersect with work time.

It has been difficult, despite her husband’s efforts to do equal parenting and housework, to get away from traditional gender roles where the woman does most of the parenting. For example, her husband will dress their son in the morning, but it’s still up to her to notice when their son needs new clothes and then purchase them. Often it feels like the many minute tasks of “household management” fall on her.

Along with the above, the general culture of “mommyhood” makes it so that some tasks fall on her whether she likes them or not. For example, the mothers at the day care tend to organize playdates, so she’s the one who both plans and goes to gatherings and outings — it would be awkward if her husband went instead since all the other parents attending are mothers.

The most difficult moments in career considering family and work life balance.

By far the hardest aspect has been the instability of scientific employment. She has been a post-doctoral researcher at GEOMAR since 2011, and she has had at least 6 different contracts since then. She has spent most of that time not knowing whether she would still have a position a year later, which has not only kept them from having a second child but also made it difficult to gain any sort of confidence in her work or her career path.

The experience of sharing family-care in everyday work/life.

Her husband and she try to split the workload evenly, but and they each have our “own” chores that work for each person (e.g. he does dishes and laundry, and she clean). It took some practice to achieve this routine though, especially since when their son was first born, she was breastfeeding and thus more naturally tied to the baby.

Additionally, she has gone to a few multi-day conferences. It’s harder for her husband to do all the parenting during those trips, but it’s not terrible – and as was mentioned above, it really helps to have access to subsidized day care.

She would advise working parents not to fret too much about keeping a clear work-life boundary and to concentrate more on finding time for both. Or rather: don’t waste energy trying to be a different person at work and at home.  She has found, for example, that she’s more productive if she sometimes works on professional things from home. She like that her son sees her mother at a computer, writing code because he’s learning that “scientist” is just as much a part of who she is as “mommy”. At the same time, she brings pictures of her family to work and don’t hide when she’s late because maybe her son kept them up all night. It turns out that her co-workers are also humans, not robots, and appreciate vulnerability and honesty about home life.

On a more practical level, she would advise parents and caregivers to utilize techniques to deal with overwhelm. Find ways to use small pockets of time, those 10-20-minute windows between interruptions that seem to comprise the entire day of a caregiver. It’s tempting to fill those small breaks with a visit to Facebook, but if you can use it productively you’ll feel a lot better at the end of the day. Make a daily list of the 3 most important things you need to do, then concentrate.