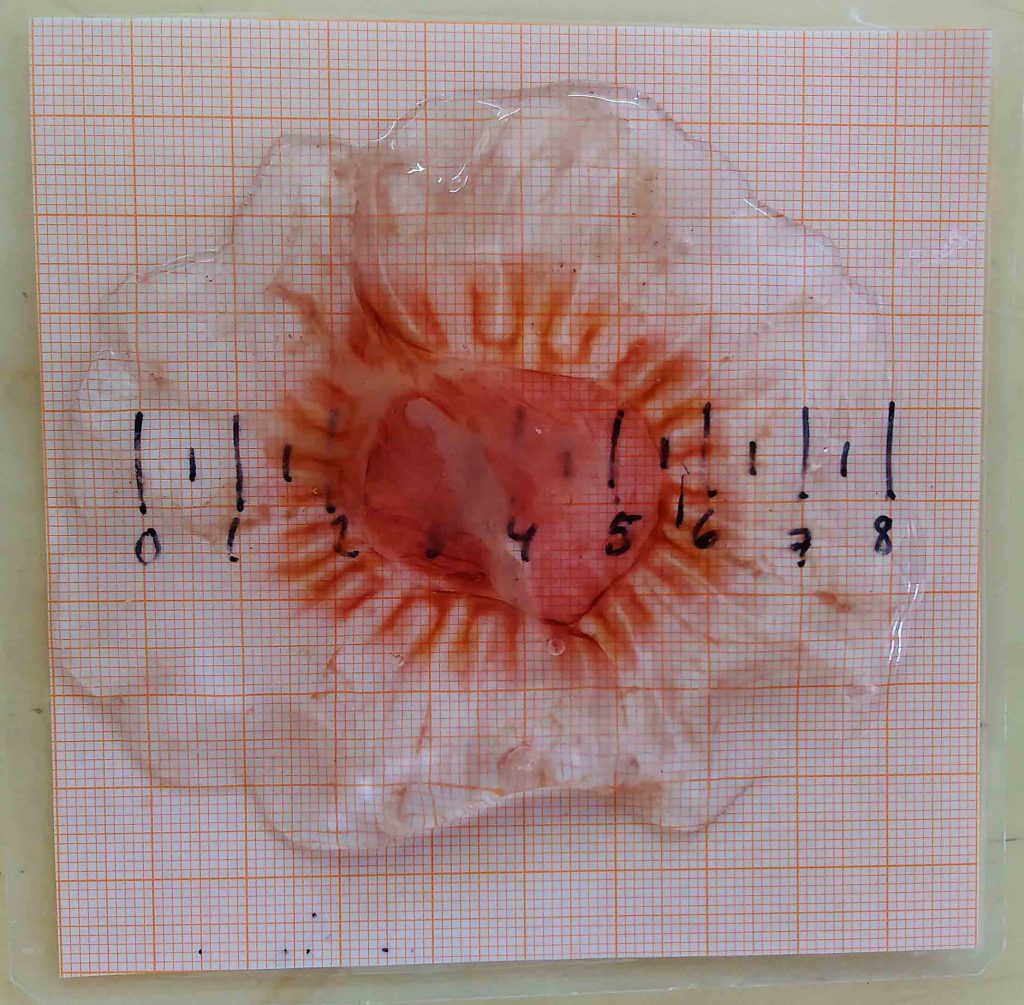 Sizing up a lion’s mane jellyfish. Photo: I. Stoltenberg

Ina and Silvia from Syddansk Universitet in Odense, Denmark joined the cruise for the EU 2020 Horizon project GoJelly. One key goal of GoJelly is to improve the understanding of the role of jellyfish in marine ecosystems. Today it’s Ina and Silvia’s turn to tell us a bit about their research routine and experiences on board:

During this cruise we are interested in the ecosystem role of jellyfish in one of the projects case study areas, the Baltic Sea. Jellyfish is actually a term for several groups of animals, that include comb jellies as well as the real jellies of the phylum cnidaria. The most prominent jellyfish species in the Baltic Sea are the harmless moon jelly (Aurelia aurita) and the lion’s mane jellyfish (Cyanea capillata), which stings when touched but usually do not seriously affect humans. There are concerns about jellyfish increases worldwide which may be triggered by input of too many nutrients to the sea, overfishing and climate change. Humans often think of jellyfish as slimy, stinging things that ruin your relaxing days at the beach and blocking our power plant cooling water intakes. But there is another side to jellyfish: they first appeared around 500 million years ago and survived several mass extinctions. Besides they are very beautiful and relaxing to watch, and are even considered a delicacy to eat in many Asian nations. Despite the long time they already exist, their survival superpowers and their link to human disturbances in ecosystems, they have long been ignored and underestimated in ecology. With our research here on board we hope to close some of our knowledge gaps existing on jellyfish and their interactions with the rest of the ecosystem. We are especially interested in jellyfish-fish interactions. For example, how are jellyfish and fish distributed in the water column? Do they compete for the same resources and do they prey on each other? And will jellyfish increase in the Baltic Sea when fish populations decline due to overfishing? To answer these questions, it is necessary to not only examine jellyfish, but we must have a look at the entire food web. To do so, we use a variety of sampling methods on board. The rosette water sampler coming in after a haul. Each of the 12 bottles can be closed individually at a different depth. Photo: J. Dierking

Our jellyfish sampling usually starts after dinner. When fisheries research is finished, the curtain rises for the hidden world of plankton. Plankton is basically everything that cannot actively swim against the currents and it includes all kind of groups from tiny one celled algae to fish larvae and jellyfish. We start our sampling with the so called rosette water sampler. It has 12 bottles that can be closed separately, allowing us to take water samples from different depth. To analyze every tiny particle in these water samples, something that we call seston, we filter large amounts of water. We then tow different nets to collect copepods, which are tiny crustaceans and a very important food source for jellies and fish. We also sample for adult jellyfish and jellyfish larvae, so-called ephyra and of course fish larvae. By counting them we can estimate abundance relationships between jellyfish and other groups and depending on the net we use, we can even tell which groups live in which depths. A main task on board is to conserve samples of all of these different organisms for later laboratory analyses with methods that allow us to reconstruct what they have been feeding on, such as stable isotope and fatty acid analysis. Ultimately, using all of the information we gather we hope to be able to better include jellyfish and their role as predator, prey and competitor in marine food webs, and use this knowledge to better understand population dynamics in the Baltic Sea. A water sample taken with the rosette water sampler is prefiltered into a canister for further analysis. Photo: J. Dierking