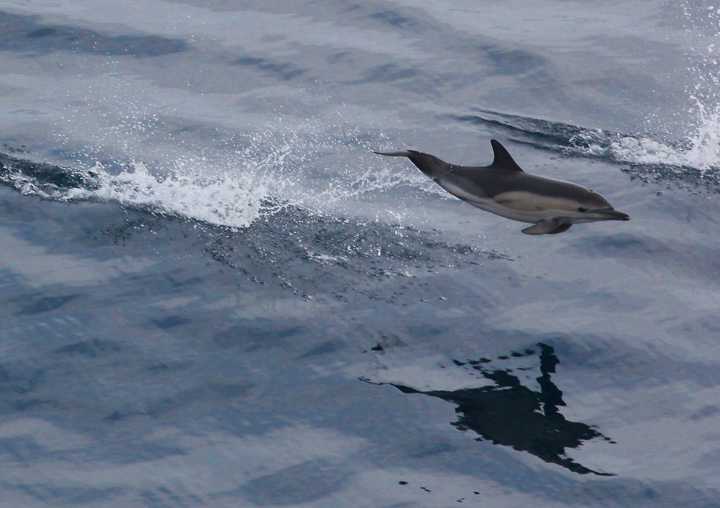 During MSM32 I have been recording and photographing all marine wildlife, in order to discover more about the animals living in this relatively unexplored part of the ocean. The data being collected could be useful for scientists and conservationists working in northwest Africa who do not have access to large research vessels, but who require such data to help guide management of offshore activities such as fisheries and oil and gas exploration. Similar marine wildlife data collected from RV Meteor off Mauritania in 2003 and 2005 have contributed to scientific publications, and are also being used by the Mauritanian government as they attempt to develop new ways of managing their marine resources.

MSM32 started with a long passage south from the UK (where the ship departed from outside my office at the National Oceanography Centre) to the working area off Morocco. We got some good views of several species of whales and dolphins; highlights included a mixed group of Long-finned Pilot Whales Globicephala melas, Common Dolphins Delphinus delphis and Striped Dolphins Stenella coeruleoalba over the shelf edge in the northern Bay of Biscay, and a few Sperm Whales Physeter macrocephalus and Fin Whales Balaenoptera physalus off northwest Iberia (Fin Whale is the second largest animal in the world behind the Blue Whale Balaenoptera musculus, and can reach a length of 27 m!). Offshore Morocco we have regularly seen large numbers of Common Dolphins, with one large group containing over 300 animals! They often come over to the ship and ride in the bow wave, allowing many of the scientists to get good views. There have been a good variety of seabirds, most of which are concentrated in shallow waters of the continental shelf where there are lots of fish to eat. The commonest species are Cory’s Shearwaters Calonectris diomedea and Northern Gannets Morus bassanus, with several hundred seen around the ship on some days. Gannet – one of the commonest seabirds seen during MSM32

Further offshore, in water depths up to 3500 m, one of the commonest species is the tiny Leach’s Storm Petrel Oceanodroma leucorhoa, which migrates to northwest Africa from breeding grounds in Scotland, Norway and Greenland. These birds seem to be particularly attracted to the ship’s lights at night, and we have picked up several on deck. Most of them are not hurt, and after spending the night in a box in my room they have been successfully released the following morning. One of the biggest surprises was the discovery of hundreds of Loggerhead Turtles Caretta caretta basking at the surface in calm weather over the continental slope. These turtles are capable of migrating from Europe to Africa, and it may be that our study area is an important feeding hotspot on their migration route. The reason why they bask at the surface is poorly understood, but it is likely that the warmth of the sun helps to increase their body temperature – this may help them digest food more efficiently than if they stay at depth in cold, dark waters (they can dive to over 100 m and stay underwater for up to an hour!). On calm days, we have also seen small numbers of the mysterious Ocean Sunfish Mola mola, as well as a Hammerhead Shark Sphyrna mokarran. Loggerhead Turtle – basking at the surface in the sunshine Ocean Sunfish – these strange-looking fish can grow to 2 m in length!

It is not just marine wildlife that we have been seeing. October is one of the main months for bird and insect migration, and we have recorded a variety of migrant land birds, butterflies, moths and dragonflies landing on the ship. Most of the birds have travelled south from northern Europe and only stopped for a few minutes or hours before continuing their journey, which for many species takes them across the Sahara Desert to wintering areas in West Africa. The new discoveries we have made so far on MSM32 have revealed that this part of the ocean is an important feeding area and migration route for many species, several of which breed in Europe and migrate here for the winter. Hopefully the data we are collecting will help guide future conservation efforts and ensure that Moroccan waters continue to be full of life.