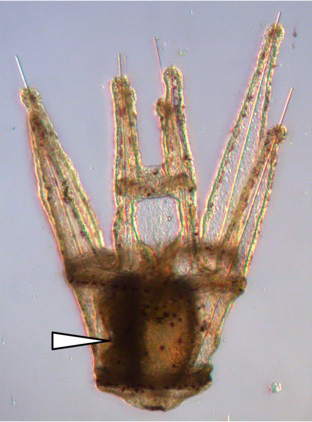 Previously on ”Das sea urchin experiment”: One month ago, a crazy Belgian scientist has added sea urchin embryos into the mesocosms. A few days later, he was surprised to see that they survived “into the wild”. Will urchin babies survive into this fierce environment?

It’s been a month now.

Every week, I checked into the samples of zooplankton taken into each of the 10 mesocosms and could recover some of the sea urchin larvae. I was amazed to see that they were developing as well (or even better) than in the laboratory. To be honest, this was already quite a success and more than I expected. With this first preliminary experiment in the mesocosm world, I just wanted to test to potential of the mesocosms to test hypotheses developed into the lab. I was not expecting to have data that I could actually use. For once, I am very happy to be proved wrong.
But it is even better than in my craziest dreams.

Last week, the larvae started to develop a rudiment. After the sea urchin embryo has developed to a pluteus larva, a rudiment is formed on the left side of the larva and then metamorphoses into a juvenile after settlement.

The formation of a juvenile ends the pelagic life of the sea urchin that settles on the bottom and starts a new life. The ideal experiment would end with my larvae settling, metamorphosing into a juvenile and starting a new benthic life. So imagine my surprise when I found my first juvenile in the samples of the week. I now have data on survival, larval growth and settlement success and a fascinating story to tell. It seems that they were only settling (so far) into the control mesocosms, the development being delayed in the high CO2 treatments. This is opening a world of opportunity and crazy ideas are boiling inside my head. Ulf Riebesell and his crew have brought me to the “dark side”. I even decided to join the next mesocosm campaign next year. But for some reason, I have the voice of a dead supervisor in the back of my head whispering: “never repeat a successful experiment”.

Well, I will just ignore it. This is too much fun.