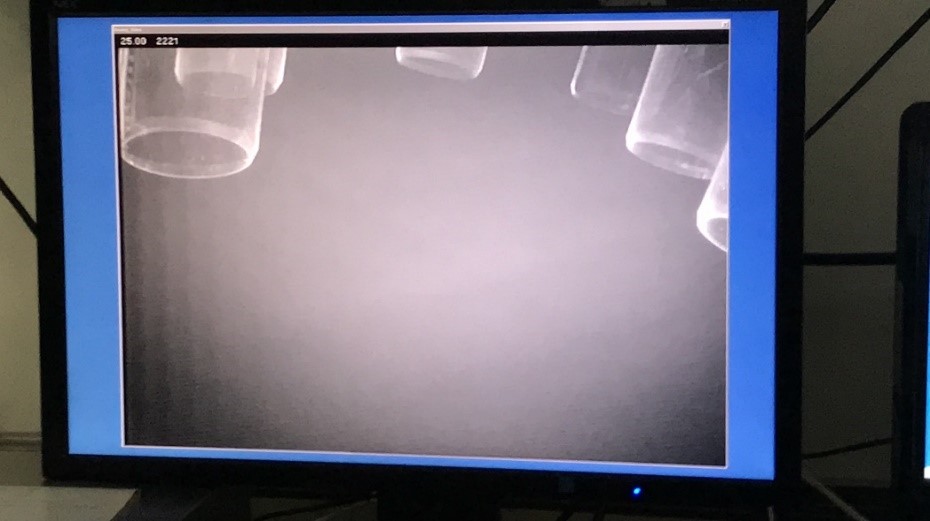 “How to make a group of scientists very happy and super excited?”

On the 5th working day, we were at the location near Rainbow hydrothermal vent. From the camera attached to the multicorer, we saw very strong plume and smoke at about 2000 m depth. And this, charged a whole room of scientists with pure excitement! 😊

This is why we are here, for these magical chemical substances and particles coming from the Rainbow hydrothermal vent (=_–)

But of course, each of us has their own reason to be here. I’m Zhouling, a postdoc from Martin Frank’s working group at GEOMAR. For this cruise, our primary focus is on barium isotopes, which is a fairly new discovered isotopic system in seawater. What we now know is that Ba isotopes of the vent fluids are distinct from the deep seawater, but what we don’t know yet is how the isotopic signature of hydrothermally-derived Ba influences that of deep seawater. In principle, processes such as removal of Ba by barite precipitation during mixing with seawater, would further fractionate Ba and modify the isotopic contribution of vent-derived Ba. Therefore, the real isotopic contribution of vent-derived Ba after vent fluid-seawater mixing remains unknown. Our second focus is on rare earth elements (REEs), which are a sequence of 14 naturally occurring elements with coherent chemical properties. In seawater, because the stability of their aqueous complexes increases with their atomic number, the lighter REEs (LREEs) adsorb on particle surfaces more easily (i.e., more particle-reactive) relative to the heavier REEs (HREEs). In such way, they can be used as particle-reactive tracers, which may be rapidly and completely removed by adsorption or coprecipitation with hydrothermal precipitates. Thus, deep-sea hydrothermal systems might act as a net removal flux for REEs. I am interested in understanding uptake and inter-element fractionation of REEs, and adsorptive scavenging of seawater REEs onto Fe and Mn oxyhydroxides in the Rainbow plume. So here, I take deep seawater samples from our team working in the clean container, acidify them and store them for analysis of Ba isotopes and REEs back at GEOMAR.

Onboard, I am working with Zvi, Nico and Sarah to sample sediment cores with the Multi-Corer (MUC). What we do is extract porewaters and slice sediments from the cores that we retrieve from the seafloor. We normally install 7 core liners, and If successfully deployed, we can use 3 of those cores for porewater. We extract small amount of porewater (less than 12 mL per layer) from the 1st core for primary parameters such as nutrients, trace and major elements, mercury concentration, platinum, Si and Ba isotopes. Larger amount of porewater (30 mL per layer) are taken from the 2nd core for Ra isotopes requested by Lucia, and from the 3rd core for Cr isotopes (requested by Delphine). Normally, we also slice one or two cores for sediment analysis. And the core slicing is pretty fun! Working with MUC is like drawing lots. Lots of praying involved -_-||. Praying for the luck of the draw.

With these porewater and sediment samples, I will try to understand early diagenesis of Ba in surface sediments under the influence of the Rainbow hydrothermal plume. In addition, there is high chance of very active Si cycling in these sediments where lots of Fe and Mn oxyhydroxides deposit, which is as well of particular interest to me.

Oh yes, I was also taking care of handling PES and Quartz filters from in-situ pumps. It was such a fun job because every time I opened the pump head and saw the color of the filters, I got a straightforward sense of what particles were present at the depth the pumps were deployed. Unfortunately, the pumps stopped functioning well after 5 days, and I had to stop this fun job ☹

And now, I’m waiting for the MUC to come on deck with those precious sediments. I hope it won’t let me down …