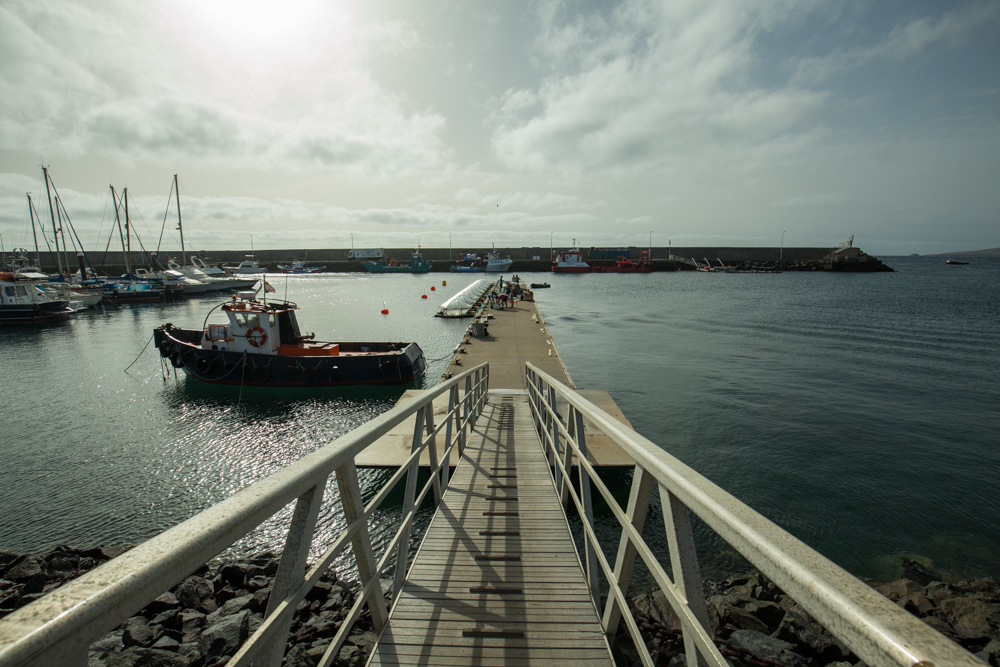 A mesocosm, in our case, is a huge translucent plastic bag anchored in the sea, with the only opening being well above sea level. In these bags, we can simulate, in this experiment, ocean alkalinity enhancement (OAE) and study its efficiency and possible impacts it would have on a plankton community under natural conditions; but safely enclosed in the mesocosm bags. In the current study, each mesocosm encloses ~8000 L of seawater inhabited by a natural plankton community – from algae and bacteria over little protozoans up to crustaceans (which usually are the prey for higher trophic levels such as fish).

The mesocosms plastic bags are made of translucent foil and permit natural light and temperature conditions. The bag resembles a cylinder of 2 m length, 2 m diameter, and a funnel-shaped tip to collect sinking particles; the so called “sediment trap”. The whole mesocosm bag is fastened in a floating frame, which is hold in place next to the pier by heavy moorings. To prevent the introduction of dirt and bird droppings, each mesocosm is covered by an umbrella-shaped hood.

Before the experiment can start, the mesocosm frames and bags have to be assembled on land. All of the parts were already ordered, manufactured or custom-made months ago at GEOMAR in Kiel and sent to Gran Canaria by container. So, in the harbor, we just had to put the puzzle together.
The mounting of the mesocosm bags is formed by two hexagonal PE-frames held together by metal structures and long screws. To these structures, the bag is attached, on land still folded like an accordion for easy mounting and to reduce the risk of damaging it.
At last, after the roofs were attached, each mesocosm is put into the water by a crane and tugged by a small motorboat to its desired position at the pier.

Only then, the single mesocosm frames are connected within a big frame, which in turn is held in place by chains and lines, anchored at the heavy moorings.

In total we moored nine of our mesocosms at the pier in Taliarte, Gran Canaria and filled them with seawater from outside the harbor. In the beginning, each mesocosm received the same water, including the organsisms within, to have comparable starting conditions.
Then, to simulate ocean alkalinity enhancement, we added different amounts of carbonates to each mesocosm to increase alkalinity – except for one, which we left as an untreated control.
The experiment will run for ~5 weeks and we will monitor how the plankton community develops under the different alkalinity treatments.

Is alkalinity enhancement effective in decreasing atmospheric CO2?
How and which algae will grow? how does this affect marine animals feeding on algae, such as little crustaceans?
Will certain organisms benefit from or even be endangered by the enhanced alkalinity, and might these reactions lead to further, unforeseen side-effects?
Most, if not all of these questions, we hope to answer at the end of the OceanNETs project and thus evaluate if we could make the ocean an ally in mitigating climate change!