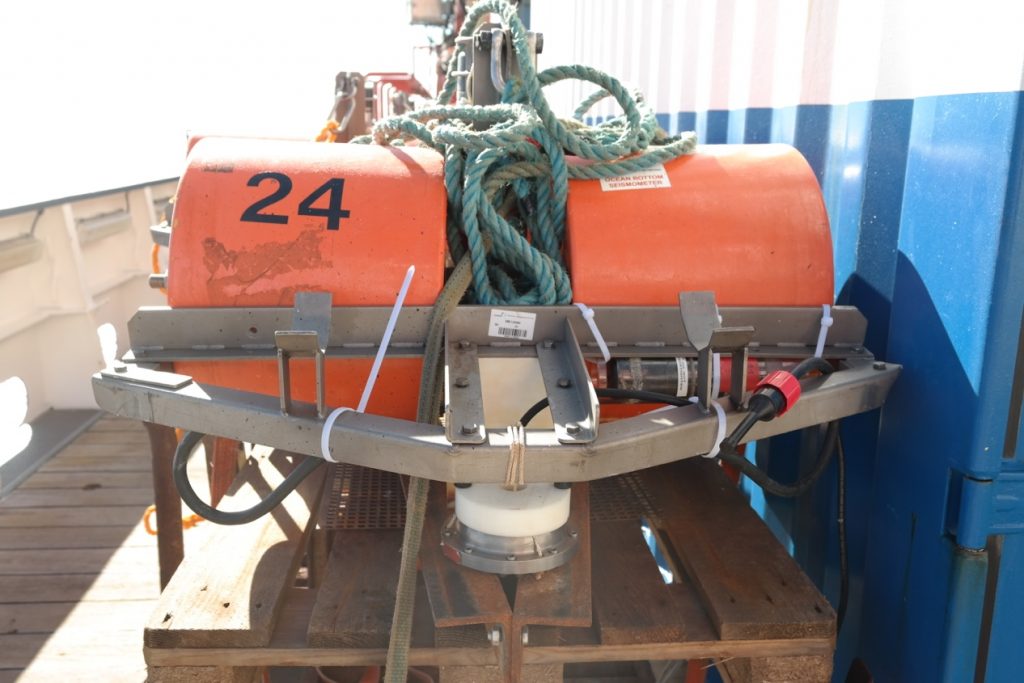 An OBS on the working deck of RV Merian. The orange cylinders are the floatations which make sure that the instrument will come back to the surface. Photo: Martha Deen

It’s Sunday, 11th of February, and we pass through the Strait of Gibraltar. We are now 4 days in transit, and 2 more days to go before we can start the experiment. As the saying holds, a good preparation is half the work. So no time gets wasted, and all hands are used to test and assemble the equipment. The equipment consists of so called “Ocean Bottom Seismometers” or “OBSs”. These OBSs will be used to record displacement and pressure, when a pressure gun shakes the earth underneath. So what do these OBSs look like?

Each OBS consist of a seismometer; and a pressure meter or a “hydrophone”. They are assembled to an anchor and a floating or “buoyancy” devices, connected to each other via a “releaser”. When we send a signal to the releaser, it releases the anchor. With the buoy still attached to it, the OBS can float back to the surface of the water. But before we throw the OBSs overboard, we want to make sure everything works… For all 24 OBSs, and for another 11 separate hydrophones! The releasers are attached to a frame to be brought to 1000 m water depth for testing. Photo: Martha Deen

For example, to check the releasers, the scientists attached them to a frame. With the help of a crane, a rope and the crewmembers the whole system was brought down to no less than 1 kilometer depth! At this depth, we made sure that each releaser worked by sending a signal, to which they responded by opening.

With all parts tested and approved, we made sure to attach all parts firmly. All set for the experiment to start!

Martha Deen,
Scientist on board of RV Maria S. Merian

(For a German version of this blog go to www.planeterde.de)