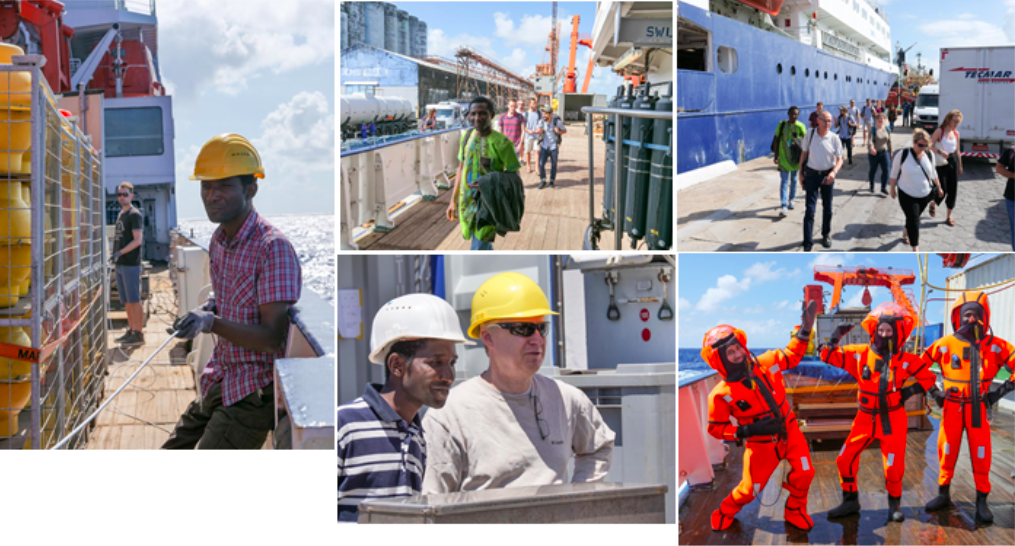 In my entire life, I have never been on the high sea; so to sleep and wake up the next day to nothing but the greeting of screeching of the ship and sounds of the rolling waves and the background music aboard is interesting. Yes, on several occasions I have been involved in research expeditions on the coastal waters but never on the high sea.

Here in the middle of the South Atlantic Ocean aboard RV METEOR on the cruise M159 with researchers from GEOMAR-Germany, Brasil, Portugal, Argentina and Columbia, I reminisce about how I got here. It was a long story, but never mind, I will cut it short not to bore you. It happened that sometime in November 2018, I applied for the Partnership for Observation of the Global Ocean (POGO) open call for shipboard training fellowship. I never recalled that I did until I got an email in early August 2019 informing me about an opportunity to place a fellow, to be hosted by GEOMAR, on the M159 cruise aboard RV METEOR, and that my application had been selected for a Skype interview for this cruise. Let me confess! I quickly activated my Skype account that had been moribund since 2016 when I returned to Nigeria from a PhD program in China. Then, Skype was one of the means of communicating with my family back in Nigeria. On the day of the interview, I faced a 3-member panel comprising of Prof. Dr Martin Visbeck (of GEOMAR, who would later become my training supervisor, mentor and the chief scientist of the cruise M159), Dr Lothar Stramma (of GEOMAR) and Dr Lilian Krug (of POGO). The interview lasted for 25 minutes and the questions were based on what I expected from the training, my qualifications and long-term career and capacity building goals. Three days later after the interview, I received a congratulatory email from POGO informing me that I have been awarded the Nippon Foundation-Partnership for Observation of the Global Ocean (NF-POGO) Visiting Fellowship for Shipboard Training on the M159 cruise aboard RV METEOR, commencing October 29 to November 20, 2019. Based on the letter of the fellowship award, I was to arrive in Recife, Brazil on Sunday, October 27, 2019.

Immediately I received the good news I jumped at the offer, not knowing what to expect of a deep-sea research cruise. But the memories of my research expeditions on the coastal waters soothed me from the uncertainty of what to expect. I began earnest preparation. First, I informed my university administration about the offer and requested for a research leave to cover up for the period I would be away from the university. Then, I applied for a Brazilian Visiting Visa that will grant me entry to Recife in Brazil, from where the cruise will start. My itinerary, hotel bills and flight tickets are sponsored by POGO. All expenses while onboard are covered by the German government.

Finally, my journey to Recife in Brazil commenced on Friday, October 25, 2019. My itinerary was supposed to take me from my base in Akure, Nigeria to the International Airport in Lagos, Nigeria where I would board a flight to Johannesburg, South Africa, then connect to Sao Paulo, Brazil and finally to Recife, Brazil. But unfortunately, the trip wasn’t as smooth as I envisaged! First, I spent the Friday night on the road for a journey from Akure to Lagos International Airport, a journey that shouldn’t have taken up to 5 hours, due to traffic congestion. Then, on getting to Sao Paulo I missed my connecting flight to Recife due to our late arrival from Johannesburg, South Africa. I eventually got to Recife on Monday (October 28) morning around 00:15 just to have a short rest before attending the 7th Seminar of the Bilateral Cooperation between the Department of Oceanography, Universidade Federal de Pernambuco, Brazil and GEOMAR Helmholtz Centre Kiel, Germany at 08:00 with other scientific crew members.

FIRST DAY ON THE SHIP

After the seminar, we drove straight to the Recife harbour and arrived there a little before 14:00 in the afternoon. The Recife harbour gave us a rousing of a mixture of strong winds and warms. I made several discoveries upon arrival at the harbour. First, I met METEOR, the research vessel that would be my home for the next 24 days. I was amazed by her immensity, neatness and many amenities present on her. The lodging was surprisingly pleasant, and the crew was so friendly. Then I met my roommate for the next 24 days, Juan Cruz Carbajal, an amiable and friendly young Argentine PhD student who also is sponsored by the POGO. Immediately we became friends. We are both given room No. 736 on the main deck (red floor). We spent the rest of the day getting oriented with the ship by the ship captain and different unit heads of the ship crew. While the allocation of assignment in preparation for deployment the following day was done by the chief scientist, Prof. Dr Visbeck. I was assigned to the mooring section for a couple of days before my reassignment to the CTD section. I worked with the deep-sea mooring group assisting with straightening and releasing of mooring cable for deployment and recovery, and cleaning of recovered mooring equipment. Thereby learning about deployment and recovery of deep-sea mooring equipment. I am at present in the CTD section where I am learning how to deploy and recover combined CTD and Lowered ADCP with many sensors and process the data.

The next day, the cruise began and we were off heading southward to the deeper part of the ocean (>5 km depth). All the crew members did their best to make us feel welcome on board. We got a tour of the bridge, the engine room and a few other big machines. The real excitement of the day began with a safety orientation.

Once we escaped the calm of the harbour and entered the rougher water, the ship began to rise and fall. Unfortunately for me being a first-time ocean-goer, I succumbed to seasickness vomiting continuously but I miraculously survived it.

I have not been involved in a whole lot of activities but simple tasks like untangling cables, getting rosette off into the water and on the deck, taking of CTD samples and processing of ocean conductivity, temperature and pressure data are enough to get the science feel going for me. One thing that surprises me is the food. While there are good and abundant foods to indulge in, being choosy, I sometimes find it difficult to eat.

I was still reminiscing about this when I heard, “Olusegun, it is time for our seminar talk.” That’s Juan, my roommate. I immediately came back to life. Lest I forget, aside from our weekly science meeting every Sunday when we review the activities of the concluding week, we have a daily oceanographic lecture by Prof. Dr Visbeck and seminar presentation in which every member of the group is assigned to a particular day for his/her presentation. So far, it’s been a great experience, knowing more about my profession, meeting people from different background and learning from them,  and of course, doing the science. I hope I haven’t bored you guys with my rhetorics, I will return after my 8-hour daily watch if fatigue hasn’t set in!

Written by Olusegun Dada, 2019 NF-POGO Shipboard Training Fellow on the cruise M159 and a researcher/lecturer in marine science at the Federal University of Technology, Akure, Nigeria

2 thoughts on “Diary of a First Time Ocean-Goer”